Has EMC Filed Lawsuit against Street Blessing in Marneuli Amid Coronavirus? 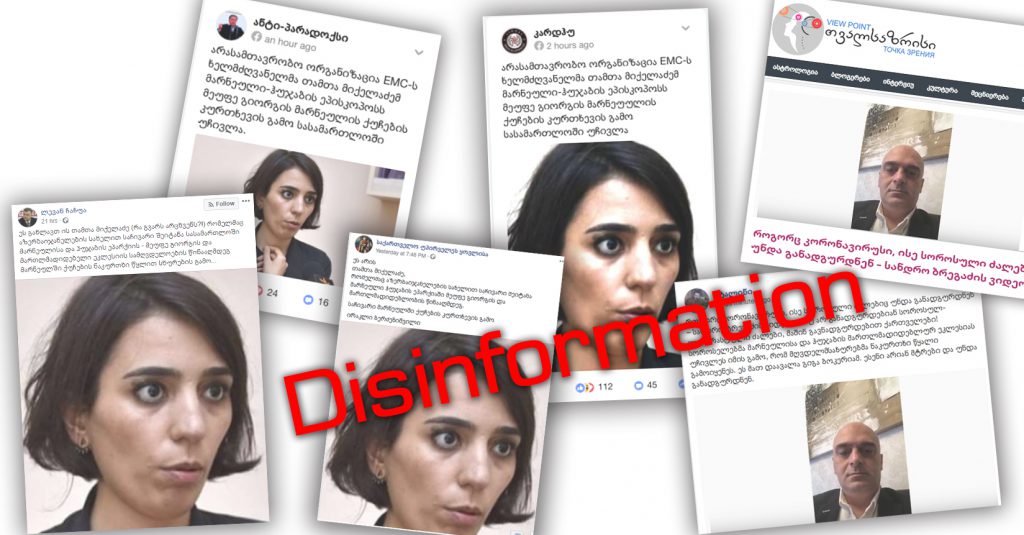 On March 24-25, antiliberal Facebook pages, as well as members of ultranationalist movement Georgian March reported that Tamta Mikeladze, one of the founders of Human Rights Education and Monitoring Center (EMC), has allegedly filed a lawsuit in court against the Marneuli and Hujabi Eparchy. They claimed that the lawsuit was against blessing the streets with holy water by Orthodox clerics after the government placed the municipality under lockdown following the spread of coronavirus there. The information was spread by Facebook page “საზოგადოებრივ-პოლიტიკური მოძრაობა “ქართული იდეა” (Public-Political Movement “Georgian Idea”) and its leader Levan Chachua, antiliberal page “საქართველო უპირველეს ყოვლისა” (Georgia First of All), as well one of the leaders of Georgian March, Sandro Bregadze, whose video address was shared by Facebook page “Stalin” and online edition tvalsazrisi.ge. Sandro Bregadze also claims that Giga Bokeria, leader of the European Georgia party, tasked Tamta Mikeladze with filing the lawsuit and the both, along with other liberals, are fighting against the Orthodox Church. On March 25, the posts with identical content were also spread by Georgian March-affiliated pages კარდჰუ and ანტიპარადოქსი.

The information spread by antiliberal Facebook pages in a coordinated manner as if EMC’s lawsuit was against street blessing in Marneuli is disinformation. In fact, EMC applied to court in February, long before the municipality was placed under lockdown and the streets were blessed by clerics. Thus, the organization could not have appealed against street blessing in Marneuli by Orthodox clerics on March 23. The lawsuit actually involves the issue of discriminative distribution of funds from the Marneuli budget.

What was the lawsuit about and when was it filed in court?

Tamta Mikeladze told the Myth Detector that the organization filed a lawsuit in court in early February regarding the issue of distribution of funds from the Marneuli budget and it could not have had any links to the street blessing in Marneuli.

Tamta Mikeladze clarified that EMC’s lawsuit challenged the allocation of GEL 1.5 million from the Marneuli municipal budget to the local eparchy over the past years. In particular, the organization challenged non-secular and discriminative spending of public funds. EMC believes that the funds of the local self-governance should be spent for public and social purposes, among them education, needs of poor people, single parents and other beneficiaries that, as the organization claims, is not the case in the municipality.

Disinformation was spread in the social network in a coordinated manner, mainly by antiliberal groups.