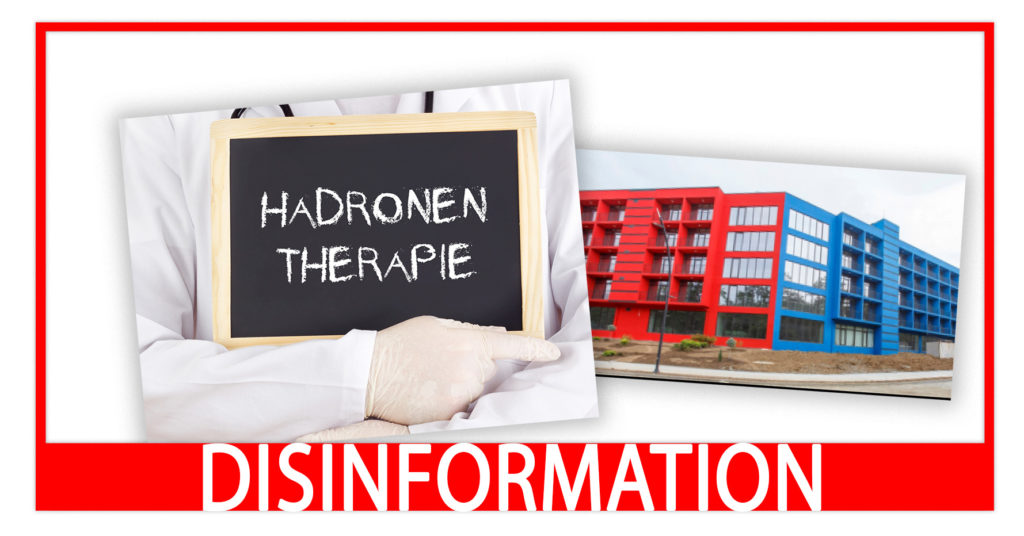 On December 17, 2020, Facebook account Lasha Modebadze, which apparently is a fake profile, published a post about Kutaisi International University funded by Bidzina Ivanishvili’s Cartu Foundation. According to the post, Bidzina Ivanishvili, leader of the ruling Georgian Dream party, is building not the university, but a high-technology research center in Kutaisi with the key goal to carry out experiments that are banned in Western countries on the population of Georgia and particularly, cancer patients. The author claims that Hadron Therapy Center established at Kutaisi International University in collaboration with the European Organization for Nuclear Research (CERN) will be one of such experiments. Modebadze links hadron therapy to the Chinese experiments on genetic modification, which, as he claims, are financed by the world’s richest technology companies, Bill Gates and the Rockefellers.

Lasha Modebadze’s post involves a link to the article published by Italian-language website gospanews.net on February 6, 2019. The article is about the first gene-edited twin sisters born as a result of the Chinese experiment. 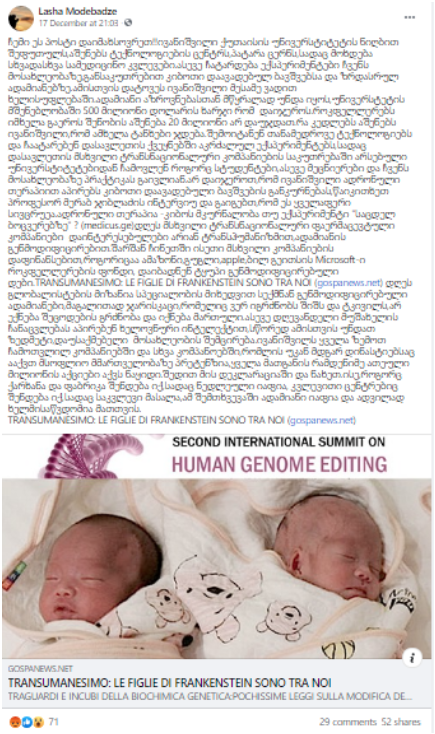 The claims about Kutaisi International University and CERN are conspiracy theories. The information about the collaboration of these organizations, as well as the research conducted by the CERN Laboratory and hadron therapy is available through open sources. Furthermore, the allegation that Kutaisi International University will be used for conducting secret experiments lacks evidence. The Italian-language article about genetic engineering accompanying Modebadze’s post is irrelevant, because the research centers mentioned in the post are involved in physics research, not genetic engineering.

A groundbreaking ceremony for the construction of Kutaisi International University (KIU) and its research center was held by then Prime Minister Giorgi Kvirikashvili in 2016. KIU opened its doors to the first cohort of students in October 2020. It admitted students into three English-language BA degree programs. Presently, 246 Georgian students are studying at the university. KIU will announce admission of foreign students immediately after the COVID-19 pandemic ends. KIU collaborates with Technical University of Munich (TUM). The operational model of the university has just been developed in partnership with TUM. The Honorary President of Kutaisi International University is Prof. Dr. Wolfgang A. Herrmann, former President of TUM.

KIU’s strategic development plan envisions establishment of a high-technology Hadron Therapy Center. This research center will offer its facilities for the scientific research in particle physics, radiation physics and biophysics, as well as support operations of the Proton Therapy Center, coupled with the Faculty of Medicine at KIU. The university collaborates with CERN, as well as other international technology and research centers just within the framework of this project.

News about the collaboration between Kutaisi International University and the European Organization for Nuclear Research (CERN) first emerged in 2015. Several research centers, including a cancer therapy center will be established at KIU. It was reported in 2015 that the Georgian government and the Cartu Foundation partnered with CERN, Italian Hadron Therapy Center and Italy’s National Institute for Nuclear Physics on the Hadron Therapy Center project.

The European Organization for Nuclear Research (CERN) was created in 1954 under the aegis of UNESCO. CERN is a joint project of 23 member states; it, however, also collaborates with non-member states, including Georgia, under relevant cooperation agreements. Over 600 institutes and universities around the world use CERN’s facilities. CERN’s high technology laboratory located in Geneva is known for its large-scale research activities in the field of modern physics. CERN’s experiments mostly involve particle physics and are concentrated on the Large Hadron Collider (LHC), the world’s largest and most powerful particle accelerator. Transhumanism and genetic engineering linked by Modebadze to CERN and Kutaisi International University are not included in the list of experiments carried out by the CERN Laboratory, because the latter is involved in physics research, not biology and genetic engineering. It is noteworthy that some technologies created by CERN are also used in medicine.

Lasha Modebadze claims that the real purpose of establishing the Hadron Therapy Center at Kutaisi International University is to carry out experiments, including those on human genetic modification, that are banned in Western countries, on the population of Georgia, particularly, cancer patients. In fact, hadron therapy is part of particle and radiation physics and it has nothing to do with bioengineering or transhumanism. Hadron therapy for cancer treatment is the latest therapeutic method based on modern physics research, which is actively used in medicine. In conventional radiation therapy, beams of X rays (high energy photons) are produced by accelerated electrons and then delivered to the patient to destroy tumor cells. Using crossing beams from many angles, radiation oncologists irradiate the tumor target while trying to spare the surrounding normal tissues.

Physicist Gia Dvali and Dr. Temur Lomtadze are currently involved in the project.

Lasha Modebadze claims that large pharmaceutical companies will carry out banned experiments at Kutaisi International University and Hadron Therapy Center, like it allegedly happened during the experiment carried out in China in 2019 with the financial support of Amazon, Google, Microsoft, Bill Gates and the Rockefeller Foundation. Modebadze also claims that the purpose of such experiments is to create genetically modified humans from people of different professions.

In fact, on November 26, 2018, Chinese scientist, He Jiankui from the Southern University of Science and Technology announced about editing DNA in human embryos. However, the purpose of gene editing was to strengthen the twin girls’ immune system and protect them from HIV, rather than determine their future and control them. Later the Chinese scientist was arrested on charges of violating ethnical norms in the process of experiments; he was found guilty of conducting “illegal medical practices” and sentenced to three years in prison. According to the court judgment, human gene-editing experiments contradict ethical standards in medical research.

There is no evidence to prove that the experiment was financed by large companies or businessmen listed by Modebadze. Linking this experiment to the CERN experiments or future experiments of Kutaisi International University is a conspiracy theory, because the Kutaisi research center like CERN will be involved in scientific research in particle and radiation physics, not genetic engineering.

Lasha Modebadze published the post at 21:03, December 17. Since then until 00:10, December 18, 13 public posts were published on his page about Kutaisi International University. Two of them were identical to the above post, while others involved the links of news stories about Kutaisi International University published by the Ministry of Education and Science of Georgia, as well as various media outlets. All posts had identical captions. 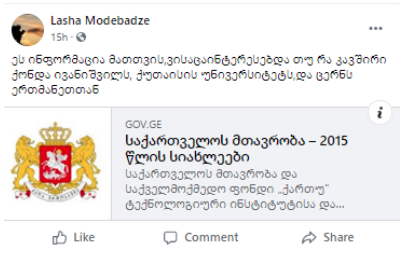 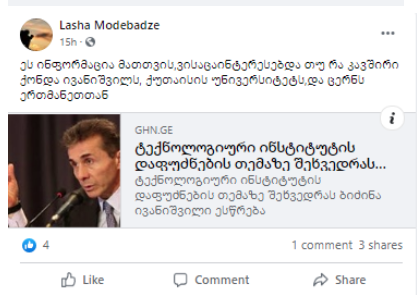 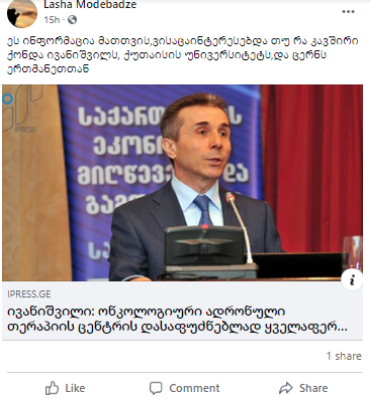 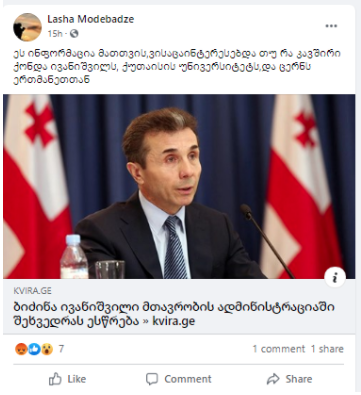 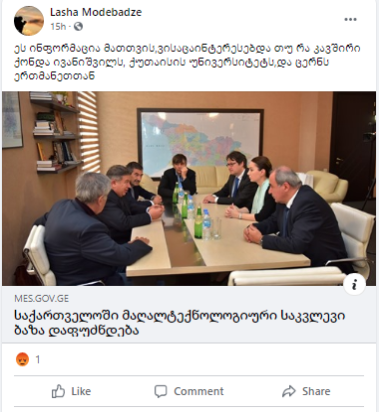 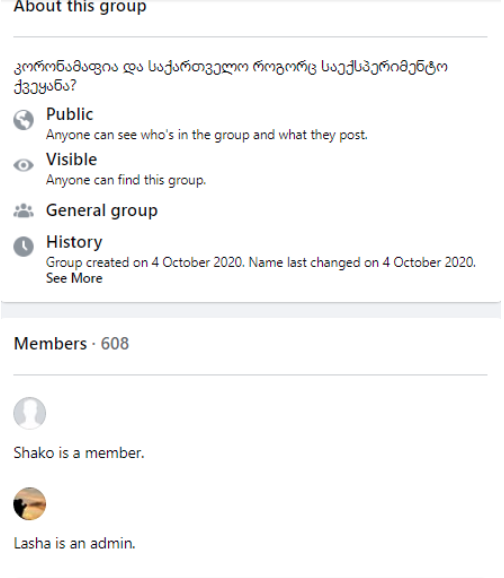 Lasha Modebadze uses his profile and the groups created by him to spread mainly Russian-language conspiracy theories and disinformation against the coronavirus and the Lugar Lab. Myth Detector wrote earlier that like Kremlin-affiliated Bulgarian journalist Dilyana Gaytandzhieva, Modebadze manipulatively spread the documents leaked from the Lugar Lab following the cyberattack against it.

Below are Myth Detector’s articles about various conspiracy theories spread by Lasha Modebadze: