Grigory Karasin Calls People, Whose Homes Are Stuck Beyond the Occupation Line Drawn by Russia, Sponsored

On January 26, the online news portal Saqinform published an article entitled “There are no justifiable alternatives to egalitarian and reciprocal cooperation between the states of the region! – Karasin”, which cites a fragment from an interview given by the Deputy Minister of Foreign Affairs of the Russian Federation Grigory Karasin to a Russian newspaper Коммерсантъ(Kommertsant). During the dialogue Grigory Karasin spoke about Russian-Georgian relations and stated in response to a question about the “bowdlerization” process in Abkhazia and the Tskhinvali region, that the Georgian side instead of caring to improve the social conditions of the population living on the border line attends to play out propagandist shows and has hired a local peasant who repeats the same quotation to foreign visitors and the media.

Grigory Karasin, Deputy Foreign Minister of the Russian Federation: “Regrettably, instead of constructive participation in the work to improve the daily life of the population living on the border line, the Georgian side is concentrating its efforts on the propaganda show in order to prove their thesis about the “New Berlin Wall.” It is laughable: They hired a local peasant to have contact with foreign visitors and record interviews in front of the camera, who repeats the same rehearsed text every time.”
Saqinform, 26th January.
Kommersant.ru, 25th January

People, who tell the reality of living close to the occupation line caused by Russian aggression to the delegations of Georgia’s partner countries, are not the hired persons, but those whose households have been placed on the territory controlled by Russian border defence forces, due to the barbed wire fences erected by the occupying forces. The “Myth Detector” offer you the stories of various Georgian citizens published at various dates by  CNN, The New Yourk Times, The Guardian whose homes now stand beyond the occupation line. 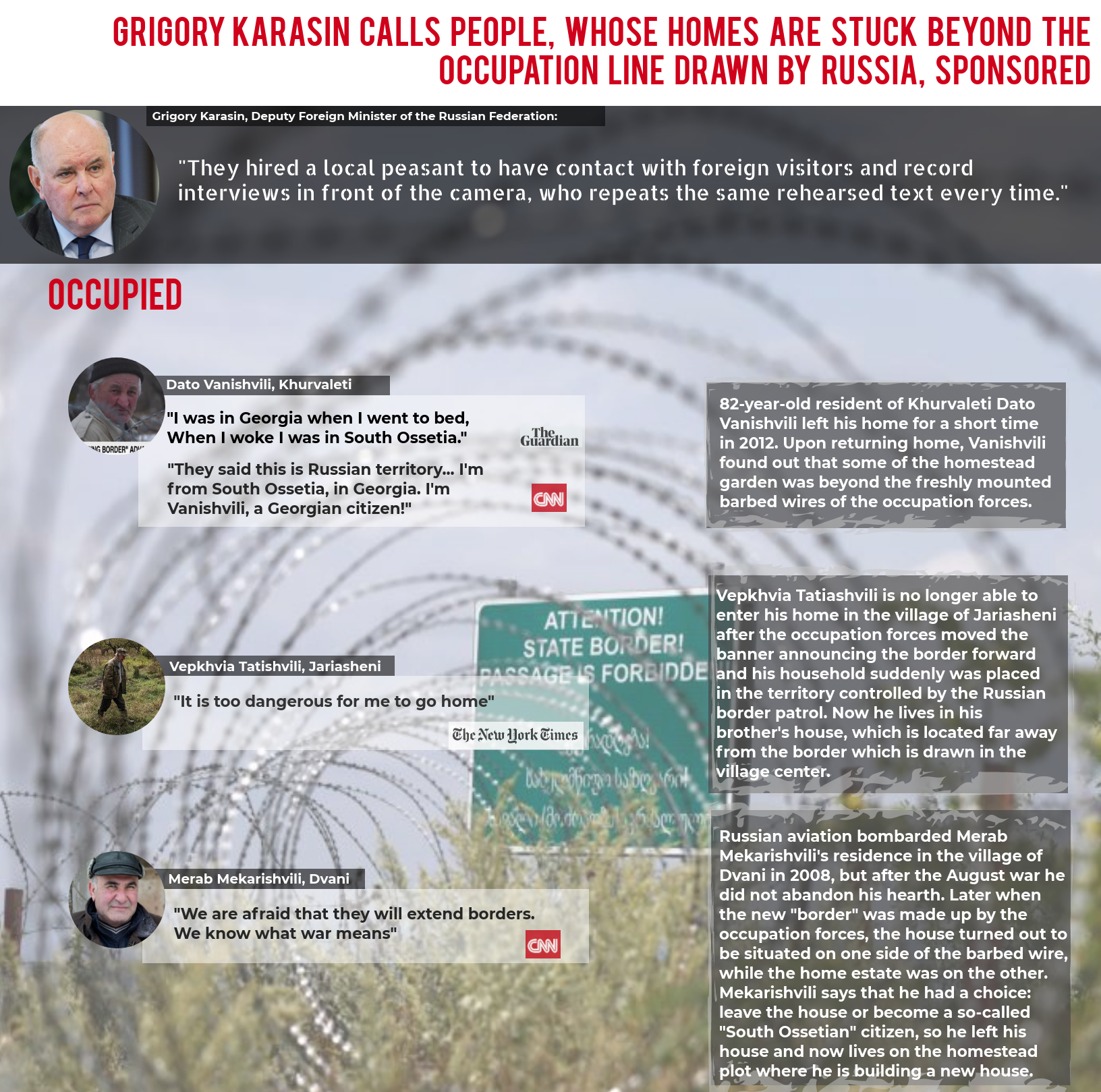 The occupation line follows the administrative boundary line with Abkhazia and Tskhinvali region from Georgia and divides the country from Russia’s occupied territories in 2008. The so-called “borderization” process, or the installation of barbed wire fences and artificial barriers following the occupation line began in 2011, when the border forces belonging to the Federal Security Service of the Russian Federation started erecting fences near the village of Didi Khurvaleti and Kvesha situated south-east of Tskhinvali. Since then, the putting up of so-called border demarcation banners and barbed wire fences has been an annual occurence. On July 4, 2017, another so called banner to mark the border line was hoisted in the village of Bershueti in the Gori district, which resulted in some of the local residents’ agricultural land lying partly beyond the occupation line.

Russian occupation forces carry out illegal arrests of people on charges of illegal border crossing in the direction of occupied Abkhazia and Tskhinvali.