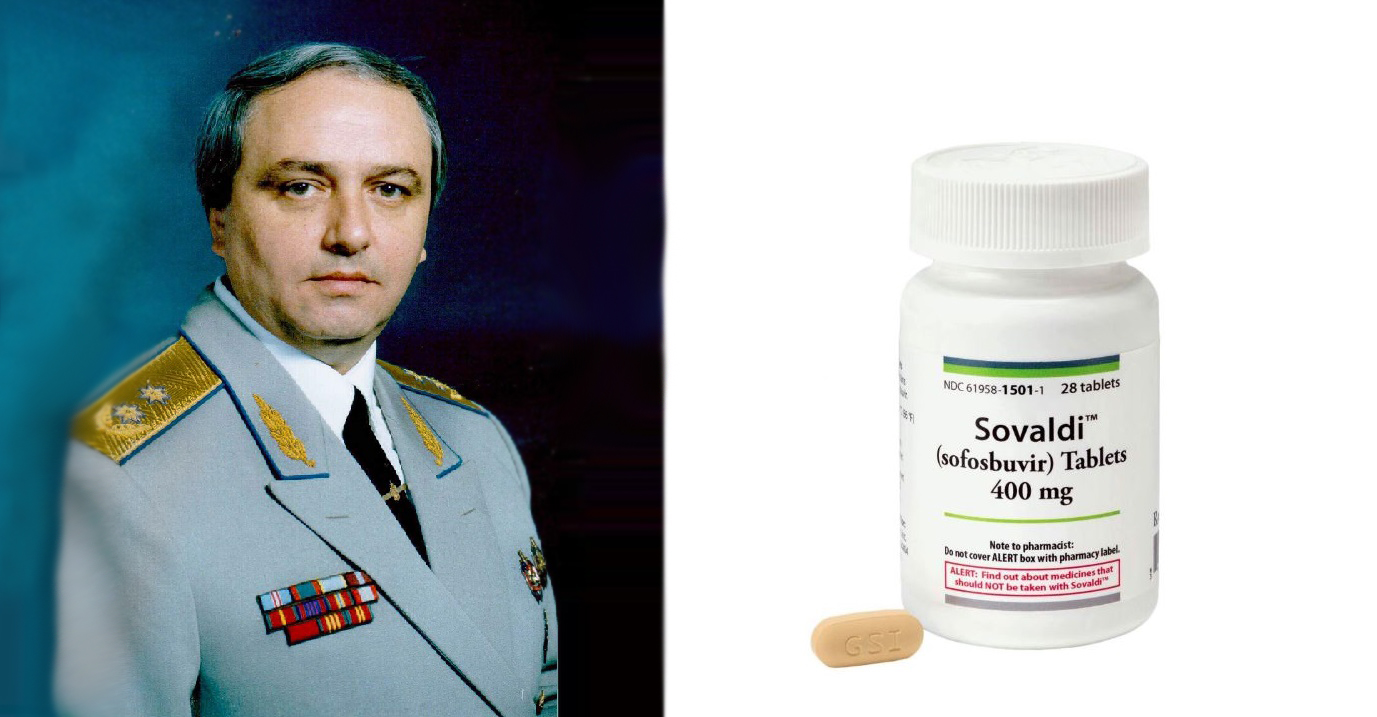 Igor Giorgadze: “It is quite possible that biologists from the U.S. army science group and hired persons working on contracts for the Defense Threat Reduction Agency conducted secret experiments on Georgian population, frequently ending with lethal consequences… 30 persons undergoing Hepatitis C treatment died in December 2015 with 24 persons dying within one day. “Cause of death is unknown” – it is written in a relevant column… Then, 30 more persons died in April and 13 more people – in August 2016 for unknown reasons. Unfortunately, no investigation has been conducted into the facts so far.”

The story prepared by Russia’s NTV channel based on the documents provided by Igor Giorgadze claims that the Lugar Laboratory is directly involved in testing Hepatitis C medication, which costs USD 80 000 and Georgian citizens receive it free of charge.

The allegations by Georgia’s ex-security chief are absurd, because the Lugar Laboratory is involved only in the part of diagnostics rather than treatment of the Hepatitis C elimination program. The claims as if Sovaldi medication used for the treatment of Hepatitis C is the reason for the death of patients have no scientific proof, since Sofosbuvir, sold under the brand name Sovaldi, as well as Harvoni used at the next stage of treatment does not need testing, as the both medications have European and American quality verification documents and are widely used not only in Georgia, but in many other countries of the world. It should be noted that 24 481 out of 36 012 patients involved in the Georgian program in 2015-2017 recovered from the disease.

Fact 1. The Lugar Laboratory is involved only in the part of diagnostics of the Hepatitis C elimination program and performs relevant laboratory analysis for patients.

Fact 2.  The documents provided by Igor Giorgadze are monthly reports and cover the period from October 31 to November 30. Those people Giorgadze is talking about died within a month, in November and not during one day, as claimed by him. December 30 is the date of preparing the report rather than the date of patients’ death.

It should be noted that about 399 000 persons die from liver diseases related to Hepatitis C annually that can mainly be explained by late treatment or other reasons. There are about 150 000 persons in Georgia with chronic Hepatitis C infection. 24 481 persons out of 36 012 patients defeated the disease in 2015-2017 due to the government’s Hepatitis C elimination program. 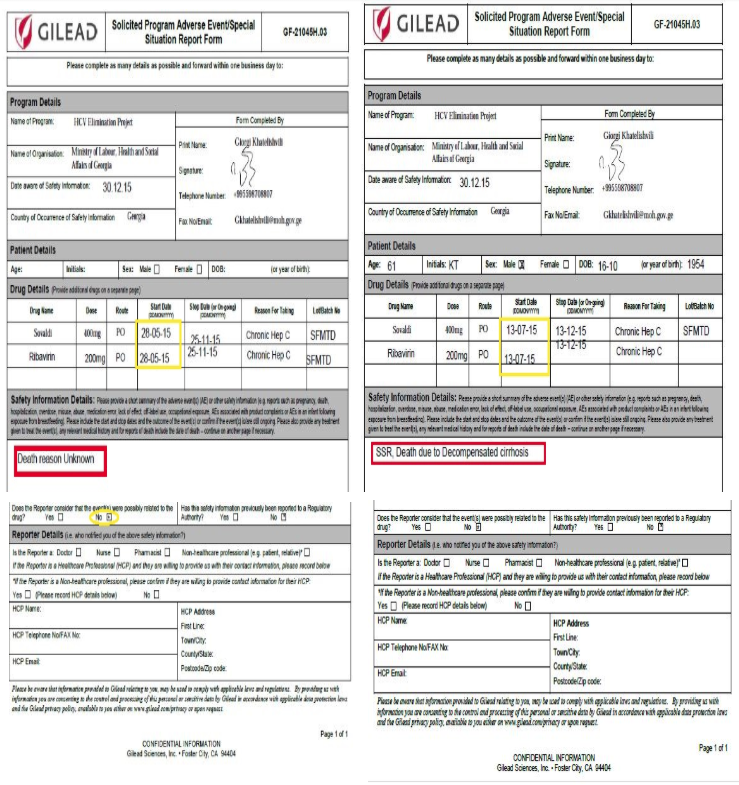 Fact 4. The allegations that Sovaldi is the main reason of patients’ death and that the medication is tested in Georgia have no scientific grounds, because Sofosbuvir, sold under the brand name Sovaldi, as well as Harvoni used at the next stage of treatment does not need testing, as the both medications have European and American quality verification documents. Moreover, Harvoni’s effectiveness has been confirmed through a number of clinical research. The both are distinguished by effectiveness and lack of side effects. The national Hepatitis C elimination program became operational in 2015. The survey conducted in the country to estimate the prevalence of HCV infection found out that 5.4% of the population were HCV RNA positive. In 2013, Georgia applied to the U.S. Centers for Disease Control and Prevention for assistance and pharmaceutical company Gilead assumed the responsibility to supply Georgia with Hepatitis C treatment medications. In 2015-2017, 36 012 patients underwent treatment under the government program and 24 481 patients (98%) recovered from the disease.

The Georgia HCV elimination programme will continue to evolve as innovative screening strategies, diagnostics, and prevention and treatment options are implemented, providing valuable lessons for the world. Following the example of Georgia, similar free programs has started in Iceland. Belgium and Greece are gauging whether they, too, can achieve the HCV elimination goals and are assessing the measures needed to curtail incidence and lower prevalence of HCV. On November 1, 2017, at the World Summit for Hepatitis, the country was awarded the honorary status of “Nohep Visionary” for its contribution into the elimination hepatitis C.

The Lugar Laboratory plays an important role in the Hepatitis C elimination program.

The Central Public Health Reference Laboratory (CPHRL), the so called Lugar Laboratory was opened in 2011 under the Framework Agreement signed in 1997 and the Agreement on Cooperation in the Area of Prevention of Proliferation of Technology, Pathogens and Expertise Related to the Development of Biological Weapons signed between the U.S. Department of Defense and the Georgian Defense Ministry in 2002. The United States provided a total of USD 350 million for the construction and technical equipment of the laboratory. In 2013 the laboratory moved to subordination of the National Center for Disease Control and Public Health (NCDC) and from 2018 the Government of Georgia has assumed responsibility for full funding and operation of the Lugar center and laboratory network.

The Lugar Laboratory is equipped to the highest standards and it plays an important role in Hepatitis C diagnosis in frames of the elimination program.

In 1973-1995, Igor Giorgadze served on various positions in the Soviet security service. From 1980 to 1981 he took part in combat operations in Afghanistan as a member of the KGB Cascade task group. In 1993-1995, he served as the Minister of State Security of Georgia. After the attempt on President Eduard Shevardnadze’s life in 1995, Giorgadze left the country. Interpol issued red notice for the ex-security minister on charges of his involvement in assassination attempts. But it dropped charges against Giorgadze in 2016, after he was granted a refugee status by Russia. In Moscow, Igor Giorgadze founded a party Justice and an organization Anti-Soros.

The materials prepared by Myth Detector on this topic: 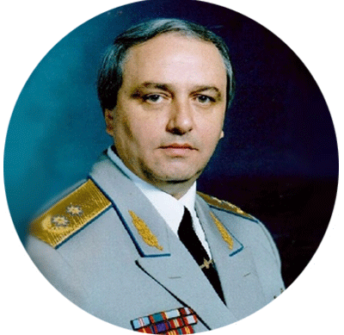