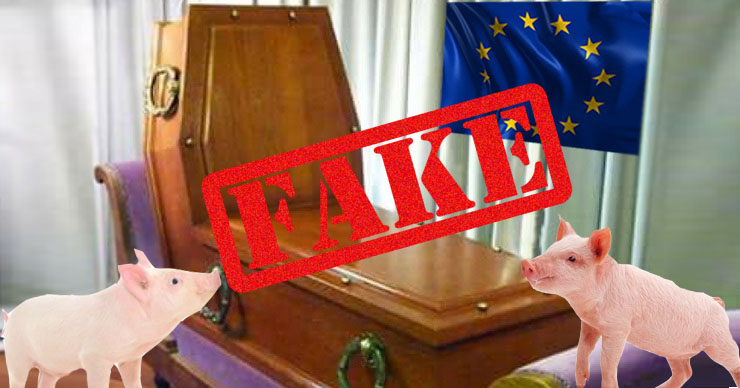 The resolutions adopted by the Sakrebulos of Zugdidi Municipality and Tskaltubo Municipality on burying the dead in a sitting position and on treatment of animals, respectively, as well as reports on distribution of boar semen in the Ozurgeti Municipality have cheered up the public. However, Georgia and World (Geworld), an online edition, took the issue seriously and saw nothing but “an insidious role” of the West in the decisions of Georgia’s municipal councils. In an article titled “Animals undergoing abortion, bulls with condoms, and the dead buried in a sitting position” that was released on July 5, 2018, Geworld cites the recommendations of the Council of Europe as the reason behind the above mentioned changes.

The Municipalities of Zugdidi, Ozurgeti and Tskaltubo explained that the decisions on burying the dead in a sitting position, purchase of boar semen for the development of pig farming and animal treatment were not related to any recommendation of the Council of Europe. The Ministry of Agriculture told Myth Detector that the resolution on making amendments to animal treatment regulations are not related to the CoE recommendations. The Ministry also said that it did not plan to introduce the CoE standards related to the development of pig farming until 2020.

Fact No. 2. The Department of Public Relations at the Sakrebulo of Ozurgeti Municipality clarified that the project was implemented in partnership with Caucasus Genetics and Farm Development Center and it aimed at developing almost disappearing branch of pig farming. As part of the project, the Farm Development Center provided local population with frozen boar semen supplied by Caucasus Genetics free of charge.

In 2015, the Ozurgeti Gamgeoba (local executive body) signed a memorandum with Caucasus Genetics, the company uniting dairy experts, breeders and artificial insemination specialists and working in the field of breeding and artificial insemination. Under the memorandum, the parties implemented the project envisaging the development of almost disappearing branch of pig farming through using the innovative technologies and methods widespread in various countries. 4.5 ha of agricultural plots located between the villages of Likhauri and Chanieti were handed over to the Farm Development Center, where a farm was built. In addition, residents of the municipality were provided an opportunity to breed Landrace and Yorkshire pigs, who are known for their weight and resistance to diseases and parasites. The Center provided locals with frozen boar semen supplied by Caucasus Genetics free of charge. At the initial stage, the project was implemented successfully, but later the process was hampered. The Farm Development Center clarified that Caucasus Genetics supplied low quality products to it and therefore the Center refused to pay a part of service fee. So, after the 2017 municipal elections, the Municipality had to repay the remaining debt.

Fact No. 3. The Tskaltubo Municipality adopted the rule of caring for domestic animals living on the Municipality territory and managing their populations upon the recommendation of Georgian Federation for the Protection of Animals. It aims at creating a safe, reliable and friendly environment to ensure cohabitation between humans and animals, as well as to prevent animal cruelty and torture through using human principles and methods widespread in the modern world.

On March 27, the Sakrebulo of Tskaltubo Municipality adopted a resolution (No.27) on approving the rule of caring for domestic animals (dogs, cats) living on the Municipality territory and managing their populations, which aimed at creating a safe, reliable and friendly environment to ensure cohabitation between humans and animals through using human principles and methods widespread in the modern world. In its May 5, 2018 resolution (No.36), the Tskaltubo Sakrebulo took into consideration written recommendations provided by the Georgian Federation for the Protection of Animals on temporary isolation, sterilization/castration, identification and return of homeless animals to their shelters and defined natural rights and protection mechanisms for animals, as living creatures with nervous system.

In the article published by Georgia and World, the journalist criticizes that part of the resolution adopted by the Tskaltubo Sakrebulo, which is related to protection of animals from mental suffering, abandoning animals, their use in films and advertisements. The author claims that nobody has explained to the Council of Europe and the Tskaltubo Municipality that geese are subject to live-plucking once a year to fill pillows with their down and a horse is subject to torture when nailing a horseshoe to its hoof.

Such allegations are groundless, because as the Georgian Federation for the Protection of Animals explained, this part of the resolution is about companion animals, i.e. those species that are not used for economic or farming purposes. Article 10 of the resolution envisages protection of animals from any forms of cruelty, causing their pain, fear, sorrow and suffering.

Fact No. 4. The Ministry of Agriculture and Environment Protection of Georgia said that the resolution adopted by the Tskaltubo Sakrebulo on changing the rule of animal treatment has nothing to do with the CoE recommendations. The Council of Europe has introduced the standards on development of pig farming, but the Ministry does not plan to introduce these standards until 2020.