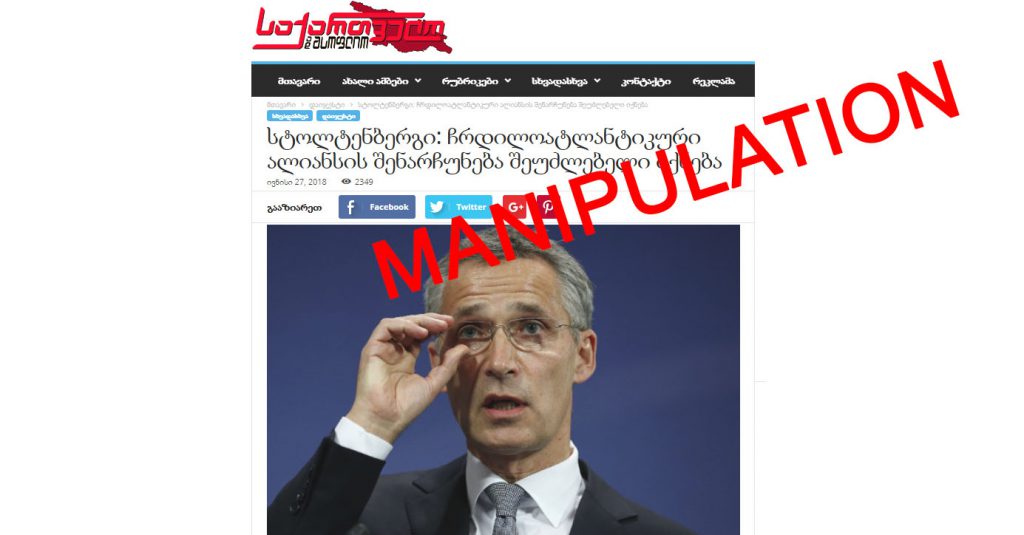 On June 27, 2018, an online edition, Georgia and World, released an article titled “Stoltenberg: It will be impossible to preserve the North Atlantic Alliance.” Georgia and World claims that NATO Secretary General Jens Stoltenberg released a letter, where he expresses doubts over the future of the alliance. Geworld also claims that the NATO political alliance will face a threat at the upcoming NATO Summit. Against the background of this new development, the online edition questions Georgia’s North-Atlantic political course.

Georgia and World covered the NATO Secretary General’s words in a manipulative manner and even used the card stacking technique of propaganda. The online edition covered only that fragment of Stoltenberg’s speech at Lancaster House on June 21, where he touched upon the issues being discussed in the alliance, whereas the part of his speech, where the NATO Secretary General talks about three strong sides of NATO that largely determines the alliance’s viability, were fully neglected by Georgia and World.

On June 21, 2018, Jens Stoltenberg delivered a speech at Lancaster House focusing on the challenges faced by the alliance and its strong sides. The full text of the NATO Secretary General’s speech is available at NATO website.

Moreover, the article predicts a threat about the United States allegedly quitting the alliance. It refers to Donald Trump’s remarks made in 2016, where he called NATO “an obsolete” organization. The online edition mentions the fact to strengthen its own arguments and says nothing about the fact that in April 2017, the U.S. president abandoned his position of lambasting the military alliance. “I said it was obsolete. It’s no longer obsolete,” – said Trump.