Geworld.ge Uses a 2016 Photo of a Manifestation in Poland to Illustrate the Developments in Norway 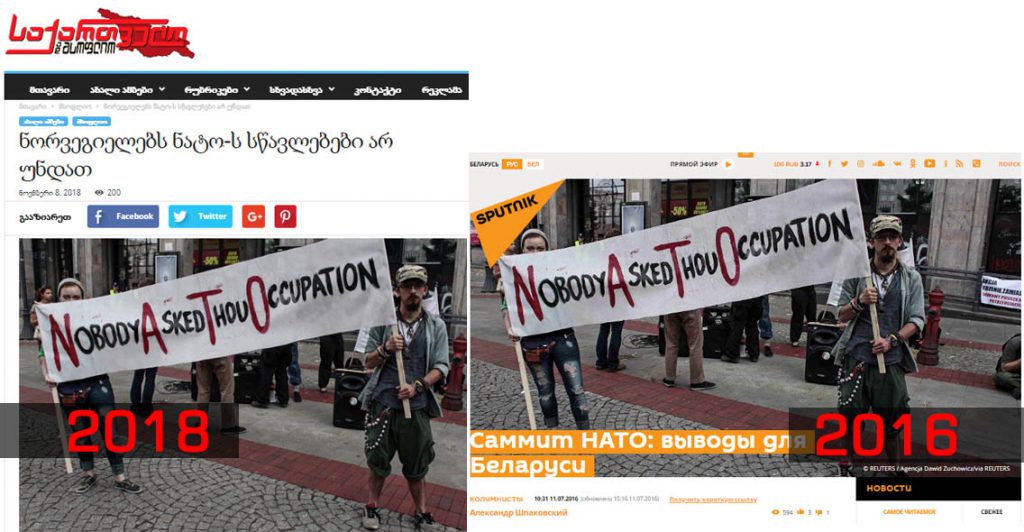 On November 8, a web-portal Georgia and the World (Geworld) published an article, titled “Norwegians do not Want NATO Exercises”. As the article claims, manifestations took place in Norway against NATO Exercise Trident Juncture, which, allegedly, uses Russia as a hypothetical opponent, and that NATO bases are located on the territory of Norway illegitimately. The publication also includes a suspicion that the ships could have carried a nuclear weapon, in the framework of the exercise. The article is accompanied by a photo that depicts two people holding a protest slogan that reads “Nobody Asked Thou Occupation”. The primary source of the article is a Swedish webpage – offensive.socialisterna.org.

Geworld.ge’s article is manipulative, as the NATO Exercise Trident Juncture is being carried out in Norway based on a request by the Norwegian Government, and the placement of the American Naval Forces on the territory of Norway, as proven by official documents, is legitimate, too. Geworld.ge uses photos from 2016 that show a manifestation in Poland to illustrate the protest, organized by the Norwegian Communist Party in 2018.

Fact 1. The photo used by Geworld.ge was, in fact, taken in Poland in 2016 and does not reflect the developments taking place in Norway.

The photo, used by Georgia and the World to illustrate the demonstration against the NATO military exercise in Norway, is manipulative and, in fact, shows two people holding a banner at the manifestation that took place during NATO Warsaw Summit, on July 9, 2016. According to a Polish edition, wyborcza.pl, Polish anarchists were the organizers of the manifestation. As the photo reportage from the given edition shows, the demonstration took place in Warsaw. Sputnik-Belarus used the identical photo on July 11, 2011 to illustrate the manifestation in Poland. On October 27, a protest manifestation took place in Oslo. According to Sputnik-International, the Communist Party of Norway and the Communist Youth of Norway were the organizers.

Fact 2. Norway itself offered NATO to conduct exercises and received a positive answer more than four years ago. The country already has experience of hosting exercises, including Cold Response, Dynamic Mongoose, and Arctic Challenge. Since 2017, 330 American Navy units have been located in the Norwegian waters, in the framework of exercise and capacity-building of the military forces of the Alliance. In 2018, Norway addressed NATO with a request to extend the stay of the given forces in the Norwegian water area for five more years and to double the number of units.

The webpage of Norwegian Armed Forces explains that Trident Juncture represents an exercise/military maneuver and is not targeted against any specific country.

On April 21, 2017, the Government of Norway presented a Security Policy Document, which includes a provision, envisaging deepening cooperation with NATO for improving security.

There are no permanent American bases in Norway. However, the cooperation with NATO and the United States is an important component of the Norwegian security. The American military forces are placed only temporarily in Norway and aim to strengthen the security capacity in the framework of the Alliance that makes up the main guarantee of security for Norway, a NATO member.

Stance of the Government of Russia

Several Russian Government officials made statements on NATO exercises in Norway, including the Defense Minister, Sergey Shoygu, who assessed the exercises as an act, directed against Russia.

Identical materials in the Russian media

Materials, identical to those disseminated by Geworld on the NATO exercises in Norway, were published in the Russian media:

About the primary source: The primary source of Geworld is a Swedish edition offensive.socialisterna.org, which is a website of the Swedish Socialist Justice Party (Rättvisepartiet Socialisternas). The party’s policy is against the North Atlantic Alliance.