Geworld.ge Publishes a Fake by Russkaya Vesna about Alleged Rape of Minors by NATO Instructors in Lugansk 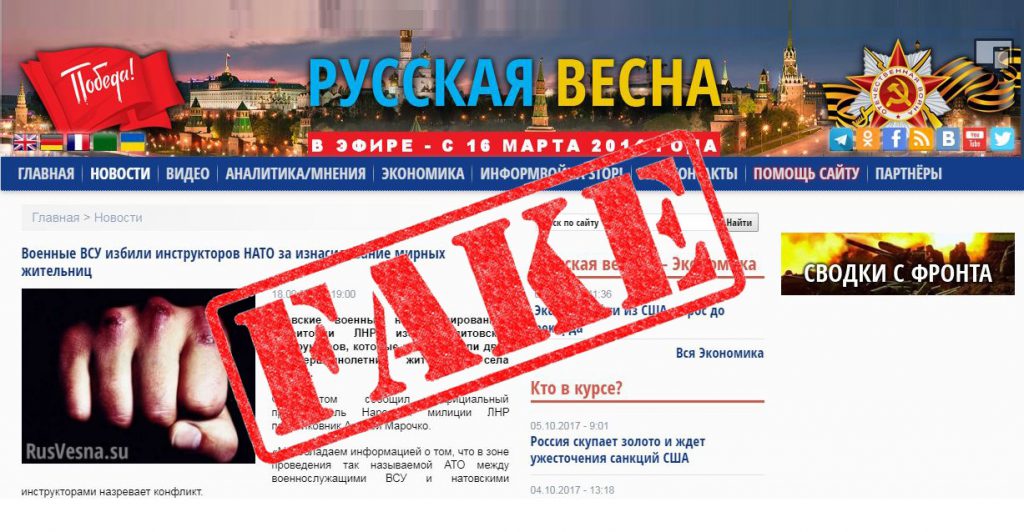 On September 27, an online edition Geworld.ge published information titled “Ukrainian Armed Forces Officers Beat NATO Instructors”. The material explains that the soldiers from Kyiv beat Lithuanian NATO instructors working on the territory of the so-called Luhansk People’s Republic, because they raped two underage girls in the Teploye village. The article is based on a statement by “the Official Representative of Luhansk People’s Republic Militsiya (Police)”, Andrey Marochko, made on September 18. According to Andrey Marochko, the fact is under investigation by the Military Prosecutor and the accused are the soldiers of one of the sub-troupes of the 14th brigade of the Ukrainian Armed Forces. Myth Detector contacted the Department of Strategic Communications and Public Relations of the Ministry of Defense of Lithuania and was told that the given information is fake and the Ministry of Defense of Lithuania had already debunked it. The period of conducting Russia-Belarus Zapad-2017 military trainings was chosen as the date for the dissemination of the disinformation. Lithuanian militaries do not participate in any kind of military actions that take place in Ukraine, including on the territory of the so-called Luhansk People’s Republic.

According to  EU vs Disinfo, as the Attache of Defense of Ukraine explained to media, there are approximately 60 Lithuanian soldiers in Ukraine and all of them are located in the central and Western parts of Ukraine. None of them are present in the Southern or Eastern part of Ukraine (Luhansk territory). Moreover, there are no soldiers in the ATO zone, be it Lithuanians or any other nation. Therefore, the story about the “Lithuanian mercenaries” is a complete  fiction.

According to the Lithuanian webpage of Delfi portal, the fake news was first disseminated in the Russian information agencies by the separatist-controlled media – Nasha Gazeta (Our Newspaper), Luhansk Information Center and Russkaya Vesna (Russian Spring). Later, it was published by Komsomolskaya Pravda and REGNUM, too. The disinformation has been disseminated in Lithuanian groups in social network. The material of Geworld.ge comes with the photo attached to Russkaya Vesna article and quotes by the representative of so-called Luhansk People’s Republic Militsiya (Police). Russkaya Vesna, on its website, indicates the Parliament of the self-proclaimed Novorossiya as one of the partners.

According to Gintautas Ciunis, the representative of the Strategic Communications Department of the Lithuanian Armed Forces, this story is special, because before there used to be legends about the “snipers from Baltics wearing white tights”, whilst now, one sees a more sophisticated game. According to Ciunis, the disinformation is very similar to “The Story of Lisa”. Initially, the disinformation is disseminated in a not so wide audience, in order to observe the public reaction. The fake news was first disseminated by the separatist sources, only then to be followed by the Russian sources, that reach out to a far wider audience, as well as by the pro-Russian information channels operating in Lithuania. The dissemination of the fake news aimed to activate those people that are not interested in Lithuania being a NATO member.

Military Cooperation between Lithuania and Ukraine

As the Ministry of Defense of Lithuania explained, Lithuania supports the territorial integrity of Ukraine and provides all sorts of possible and legally allowed support, including the military sphere. The given includes supporting Ukraine with arms and equipment, treating the Ukrainian soldiers wounded in the anti-terrorist operations and contributing to the reformation and training of the Ukrainian Armed Forces, together with allies. On July 1, 2017, a military-training mission of 40 Lithuanian instructors was established in Ukraine. As the Ministry of Defense of Lithuania notes, cooperation with Ukraine remains one of the priorities of the foreign and security policy of Lithuania.