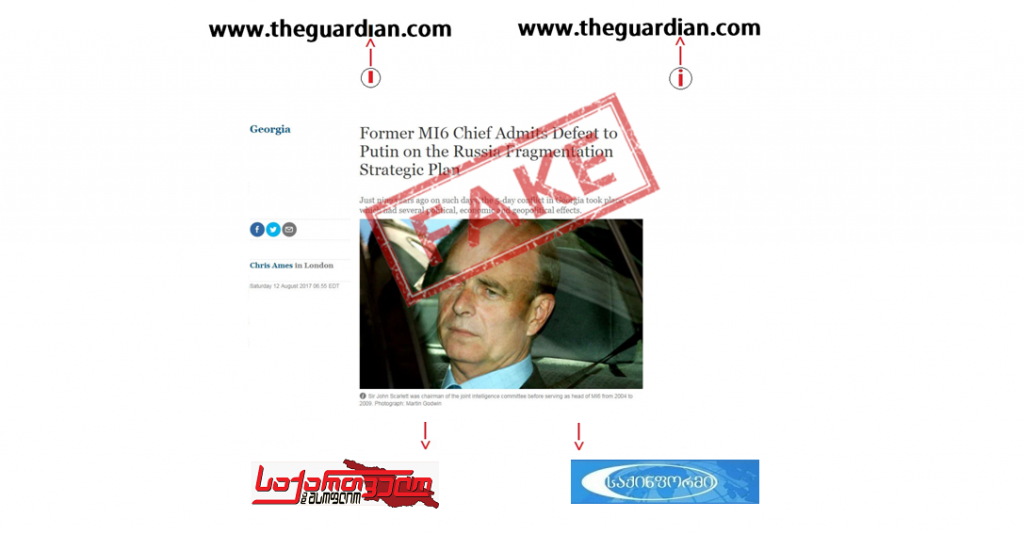 On August 16, online editions  Sakinform and Geworld.ge released the articles with identical contents and different headlines.

Sakinform: “Sensation!!! The United States and the Great Britain planned to deploy military and intelligence bases in South Ossetia as well as to involve radical Islamists in destabilization of the situation in the Caucasus!”

Geworld.ge: “Former Chief of the British Secret Intelligence Service: After we brought Saakashvili to power, we supposed to implement the Russia Fragmentation Strategic Plan at three stages.”

The both articles read that in his interview with The Guardian, John Scarlett, former Chief of the Secret Intelligence Service (SIS, also commonly known as MI6), allegedly disclosed a three-stage strategic plan of the United States and the Great Britain aimed at Russia’s fragmentation. John Scarlet is quoted as claiming that the first stage of the plan envisaged the deployment of military and intelligence bases around South Ossetia and involvement of security officers. The second stage envisaged bringing of radical Islamists to power in Chechnya, Dagestan, North Ossetia and Circassia. As for the third stage, it was planned to provoke a fake conflict in Ukraine, but Moscow managed to protect the country against this threat. At the end of the article Sakinform notes that this fact confirms once again that the 2008 August war in Georgia, as well as the war in Ukraine, was provoked by the Great Britain and the United States. Sakinform did not refer to its primary source and Geworld.ge referred to REN.TV as its primary source.

interview with John Scarlett, former Chief of the Secret Intelligence Service, released by Sakinform and Geworld.ge is a fabrication. The BBC Russian Service verified identical reports disseminated online in Russia and Ukraine and clarified that the material was disseminated by a fake website, imitating the British Guardian. 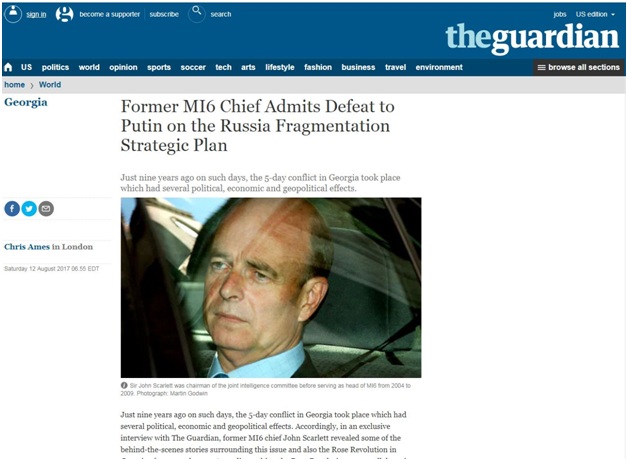 Fabricated web-page of The Guardian

According to the BBC Russian Service, on August 12, a website www.theguardıan.com posted a fake interview with former SIS Chief John Scarlett. The specially created website was visually identical to the British Guardian’s website with only one difference in its URL, where a letter “ı” was used instead of Latin “i”.

According to the BBC Russian Service, the sequence of sentences in the fake interview frequently follows the Russian language model, while the fragments of this article indicate that the author of the interview is a Russian. In particular, the author seems to lack vocabulary for his English translation. The article is full of grammatical and stylistic errors, including omitted articles. Instead of British spelling, the author uses American spelling that is absolutely unacceptable for British publications. At the same time, punctuation marks are used almost similarly as in Russian.

British daily newspaper The Times writes that such coincidence creates a doubt that the text was written by a Russian-language author. “Pro-Kremlin operators are suspected of being behind a sophisticated “fake news” article,” it added. In addition, the overall narrative is consistent with Kremlin claims, according to which “only Putin can restrain western aggression.”