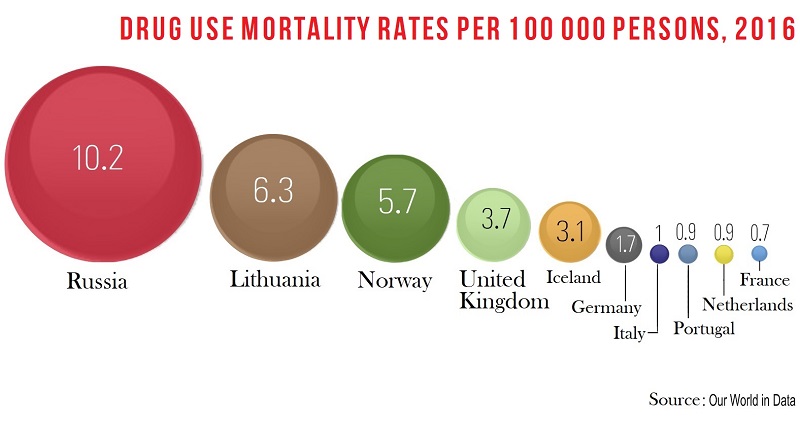 On June 21, 2018, an online edition Georgia and World released an article titled “When supporting Saudi Arabia to spite Russia, just take a look at the history!” The article cites bringing up children properly and common values as Russia’s advantages, simultaneously making homophobic and xenophobic assessments. It also brings Russia’s attitude towards drug use as an example:

Geworld.ge: “Future of the country, bringing up children properly is most important there [in Russia]. Future generations are inspired from the very beginning that drugs are bad, that non-traditional orientation is bad, that no sects should exist in an Orthodox country. But we are tolerant; we smile at everybody; we allow everyone but Russia to do anything, because swearing at Russia is European and American agenda and the majority of our media outlets follow this agenda.”

Actually, the rates of drug addiction, including among young people, are one of the highest in Russia, compared to the EU countries. Due to ineffective drug policy, Russia takes the lead globally by drug use mortality rates.

Lack of exact statistics in the Russian Federation does not enable making comprehensive comparisons, but even the available scarce data create quite a deplorable picture.

According to the report released by the United Nations Office on Drugs and Crime, the 2009 data show that young adults aged 18 to 30 years account for 80% of drug users in Russia.

According to the 2012 report released by Eurasian Harm Reduction Network, Russia has some of the highest rates of drug use that is mainly caused by ineffective drug policy.

According to International Narcotics Control Strategy Report released by the U.S. Department of State in 2018, drug users in Russia have numbered between 7.3 to 8.5 million for the past several years. Religion is listed as “the most suitable therapy” for drug addiction. As a result, drug addiction in Russia is typically treated with antipsychotic drugs suited to treat schizophrenia, instead of agonist and antagonist agents.

There is no effective rehabilitation program available in Russia. Even the Federal Drug Control Service of the Russian Federation acknowledged that over 90% of patients lapse back to drug use within a year. Due to the government’s ineffective approach, number of drug users is deplorable in the country. Moreover, number of HIV patients is regularly increasing. No HIV/AIDS awareness campaigns are conducted; in addition, the state restricts the activities of organizations, whose efforts are directed to harm reduction and who use various strategies, such as offering clean needles and condoms to drug users. 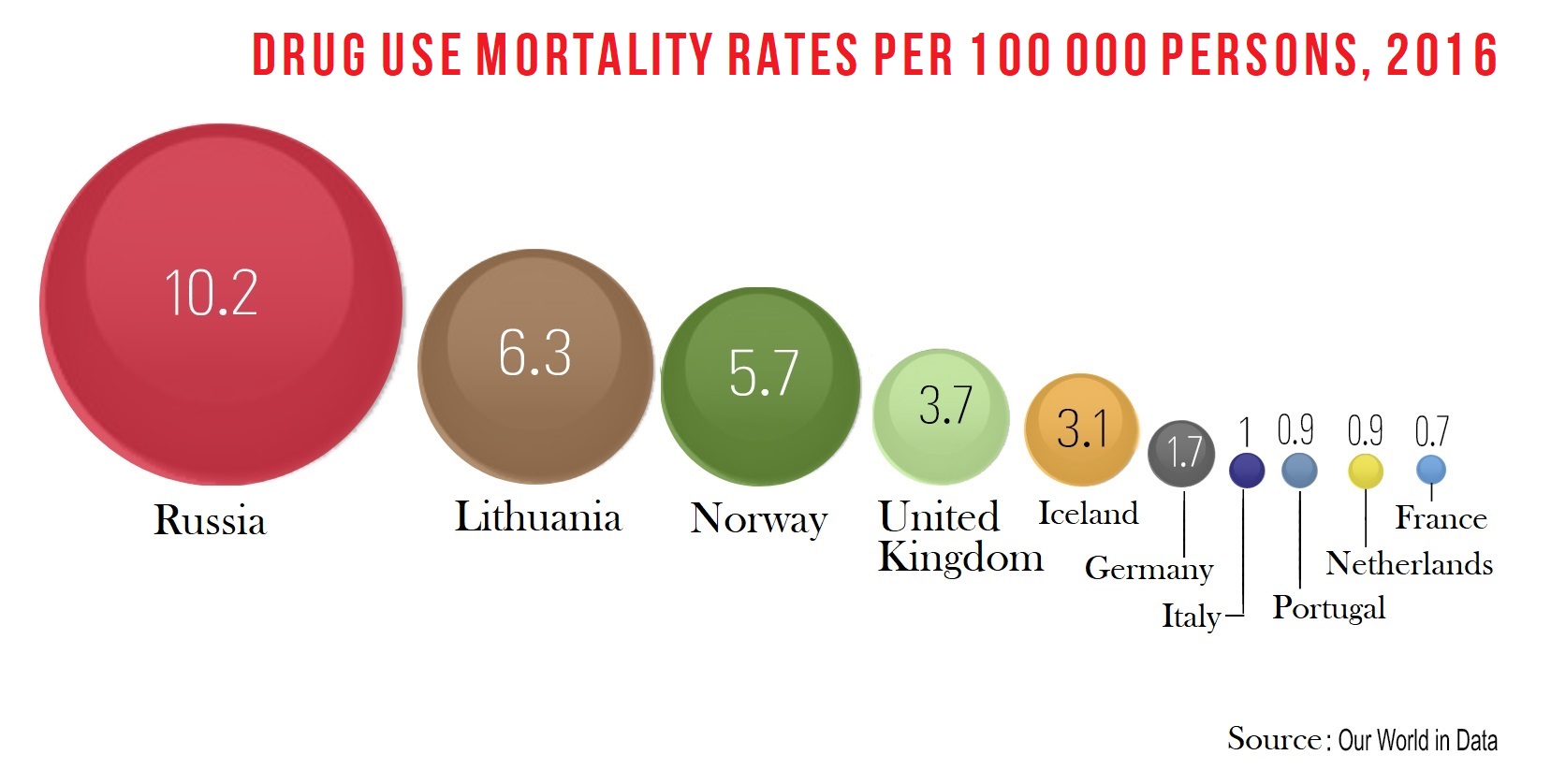 Russia also takes the lead in the world by the rates of alcohol abuse.

It should be noted that an open approach pursued by the Netherlands, which is pragmatic and aims at harm reduction, proved to bring more positive outcomes than the restrictive policy pursued in many other countries. The HIV prevalence among drug users is extremely low in the Netherlands. The rates of heroin use are so low that they can even be neglected. Cannabis use among young people is equal to the average in Europe and is significantly low compared to the countries with restrictive policies. A central element of modern Dutch drug policy was a crucial decision to separate markets and establish a legal and practical separation of cannabis – judged to pose “acceptable” risks to consumers and society—from hard drugs associated with unacceptable risk. A risk considered by Dutch policymakers was that people buying illicit marijuana would be in contact with those selling harder drugs. Therefore, so called coffee shops were opened, where cannabis is openly sold and consumed. As a result, in the Netherlands, only 14 percent of marijuana users can get other drugs from their cannabis source. For example, in Sweden, 52 percent of marijuana users report that other drugs are available from their usual cannabis source.

With respect to heroin and other hard drugs, the Dutch government at national and municipal level put a premium on reduction of individual and social harm. This commitment has been reflected in the government’s investment in comprehensive health and social services. Low-threshold methadone and safe consumption rooms as well as needle exchange programs greatly reduced the dangers of an open drug scene, including exposure to uncontrolled criminal elements.

Portugal, where drug use is treated as a medical issue rather than a crime, became the first country to decriminalize the possession and consumption of all illicit substances in 2001. Rather than being arrested, those caught with a personal supply might be given a warning, a small fine, or told to appear before a local commission – a doctor, a lawyer and a social worker – about treatment, harm reduction, and the support services that were available to them.

According to the Portuguese approach, drugs were not the problem; the problem was the relationship with drugs. Following radical changes in drug policy, the opioid crisis soon stabilized, and the ensuing years saw dramatic drops in problematic drug use, HIV and hepatitis infection rates, overdose deaths, drug-related crime and incarceration rates. HIV infection plummeted from an all-time high in 2000 of 104.2 new cases per million to 4.2 cases per million in 2015.