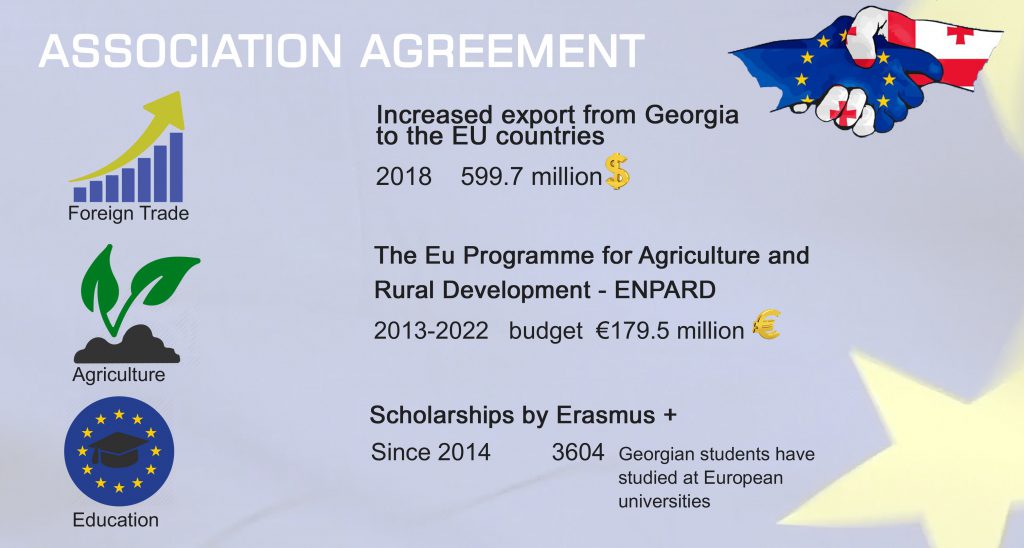 On December 6, a web-portal Georgia and World published an article, in which a journalist, Nodar Gavasheli mentions that the only benefit the Association Agreement (AA) brought to Georgia is visa liberalization and nothing else. He also added that the visa-free movement between Georgia and the European Union is beneficial only to Europe, as Georgian tourists represent an additional source of income for it.

Geworld’s claim that the visa liberalization is the only benefit that the AA brought to Georgia is ungrounded, as, since signing the AA with the European Union, export to the EU countries increased by USD 599.7 million. The EU also allocated EUR 179.5 million for improving the agricultural sphere in 2013-2022. From 2014 until today, 3,607 Georgian students received education in European higher education institutions through the EU funding.

According to the data by the National Statistics Office of Georgia, export from Georgia to the EU countries in January – October of 2018 amounted to USD 599.7 million, which is 11.1% higher than the analogous indicator from the last year.

Out of gross export of Georgia, 21.8% falls on the EU, which is also on the rise, as compared to the previous years.

In total, the entire trade turnover with the EU countries comprised USD 2,769.7 million, an 18.6% increase relative to the last year.

Deep and Comprehensive Free Trade Agreement ( DCFTA ) is an important part of the Association Agreement which implies waiving customs fees for the signatories. This opens up a 500-million market for Georgian companies and is a facilitating factor for those who would like to export their products to the EU.

ENPARD, the European Neighbourhood Programme for Agriculture and Rural Development, has been implemented since 2013. The programme aims to develop Georgian villages and reform the agricultural sector. Its budget comprises EUR 179.5 million for the period of 2013-2022. According to the official webpage of the project, additional GEL 222 million has been allocated for the third phase of the project (2018-2022).

Through ENPARD support, the Agricultural Cooperatives Development Agency has been created. It aims to promote agriculture, provide for socio-economic rural development, and increase the profitability of production. The Agency unite 1,121 cooperatives, in total.

Through the creation of the cooperatives, local entrepreneurs found it easier to increase the quality of production and income. 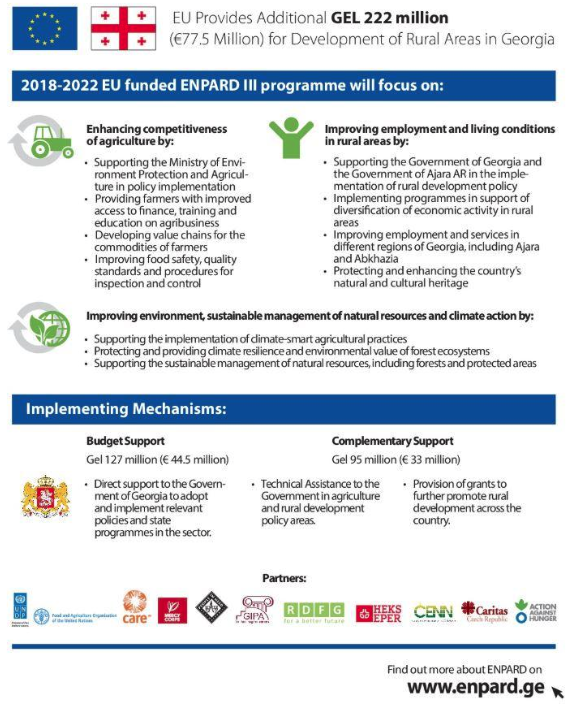 Article 37 of the AA envisages support of agricultural development, modernization of production, and sustainable development. To this end, the given program represents one of the tools of the EU.

Erasmus+, a grants program by the EU, is implemented in Georgia. It carries out projects in education, training, and sports in the period of 2014-2020. The budget of the seven-year project is EUR 14.7 billion and includes a 40% increase, compared to the current budget, which indicates the interest of the EU to invest more funds in the education sphere.

According to the constantly updated statistics of the Georgian universities, participating in Erasmus+ Credit Mobility program, as well as their European partners, Georgia is on eighth place out of 131 participant countries. At this stage, the cooperation is carried out between 32 Georgia higher education institutions and 33 European universities.

Based on the statistics of the last four years, 3,607 Georgian students benefitted from Erasmus+ Credit Mobility program, in total. This program allowed the Georgian students to study in European universities, something that would not have been easily manageable for many of them without the Erasmus+ funding and scholarship, considering the high costs of studying and living in Europe.

It is planned to allocate additional EUR 6 million as targeted funding, with more than half of that amount (EUR 3.5 million) flowing to the exchange programs.

Apart from economy, agriculture, and education spheres, the AA envisages active cooperation between the parties in the direction of development and welfare, including:

About the source: Georgia and the World newspaper and internet-portal is published by LTD Historical Heritage, the foundation of which was publicly praised by the President of Russia, Dmitry Medvedev. The edition stands out with its anti-Western publications, as well as turkophobic, racist, and homophobic statements.

Statements aimed at inciting Euroscepticism, including the claim that the European integration is, in fact, non-profitable for Georgians, hold a special place in the anti-Western propaganda in Georgia. The given trend has been demonstrated by the studies conducted by MDF in 2016 and 2017 on anti-Western propaganda.