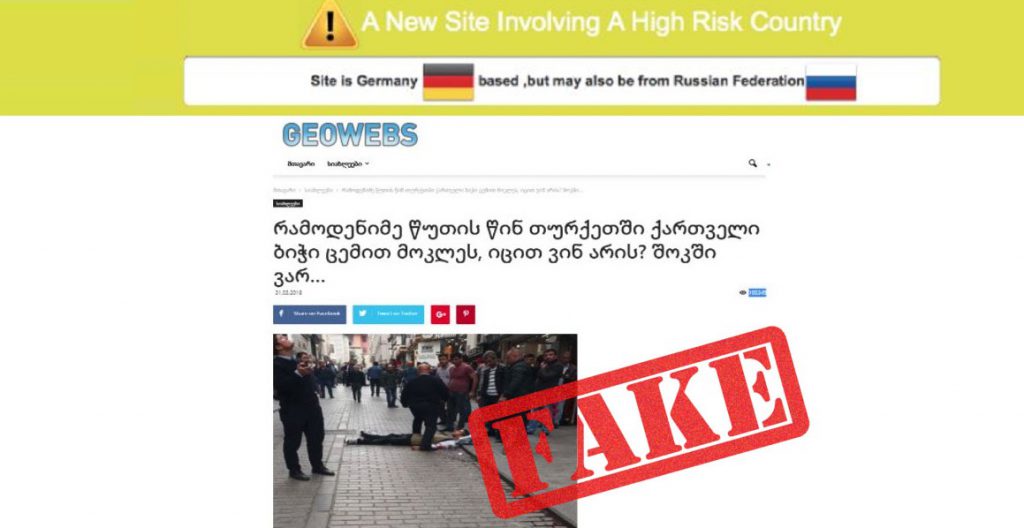 On March 31, a web portal Geowebs.ru repeated fake news disseminated a year ago and released an article titled “A Georgian man was beaten to death in Turkey several minutes ago. Do you know who he is? I am shocked…”

Geowebs.ru is a website, which was registered on the Russian domain two months ago and tries to increase its readership with the help of clickbaits. Similar websites use clickbait headlines and fake news to get as many clicks as possible. The website has been registered for a period of one year, which, according to Scamadviser, follows the pattern used by many fraudulent and fake selling websites. The Myth Detector checked the article and its accompanying image last October, right upon its dissemination, and ascertained that:

The website Geowebs.ru is 63 days old and it was registered on January 29, 2018 for a period of one year. Its registrar is REGRU-RU. According to Scamadviser, the website is Germany-based, but may also be from the Russian Federation. So, the website has a high risk country associated with it. The website has been newly registered with a short life expectancy, which follows the pattern used by many fraudulent and fake selling websites. According to Scamadviser, another website – athome.ge has also been registered on Geowebs.ru server. It represents a real estate portal in Georgia.

REG.RU is a domain name registrar, which has been operating on the market since 2006. The company’s head office is based in Moscow, but it also has branches in various CIS counties. Alexey Korolyuk serves as its director general.

Using sensational headlines and visual effects (photo, animation) to attract readers is the primary goal of clickbaits. The website traffic increases along with an increased number of clicks that enables the website to make more money. Number of similar websites has significantly increased recently. They disseminate fake news created by them through social media. Their readership quickly increases after clicking on a link and social network, in turn, shows most viewed reports to its users. It further increases the number of fake or yellow news viewers.