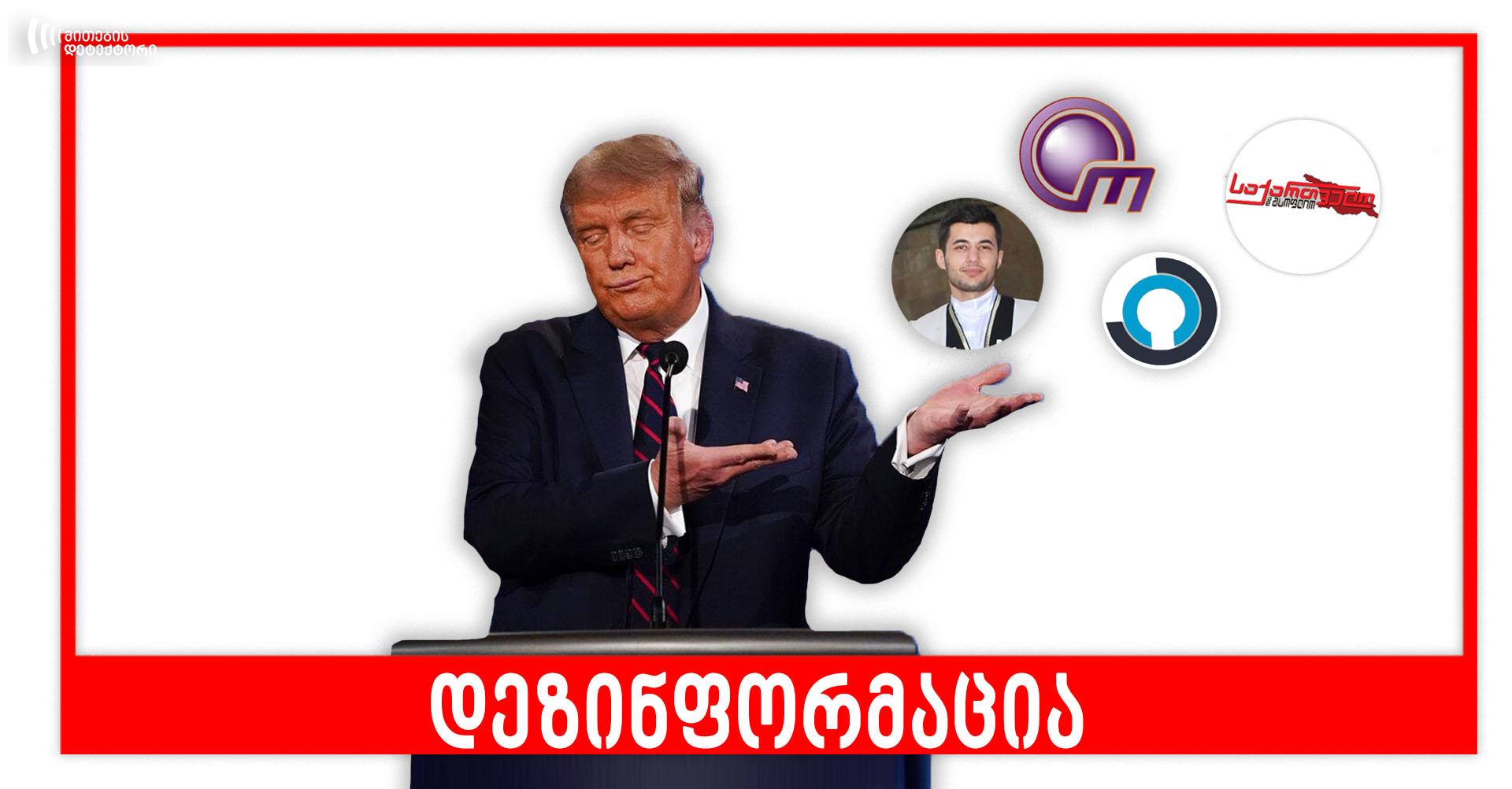 The inauguration of Joe Biden as the 46th president of the United States took place on January 20. Biden took over the presidency amid widespread voter fraud allegations voiced by ex-President Donald Trump and his allies since the November elections. The same allegations were actively promoted in Georgia by Trump supporters, ultranationalist and pro-Kremlin media outlets, including Beka Vardosanidze, Georgian journalist working for Alt-Info, Obieqtivi TV as well as Georgia and World. They claimed that election observers were not allowed to monitor the voting process. Moreover, counting rooms were wrapped in sheets of plywood to prevent people from viewing the process of vote counting. They also said that overall, the voting process was not transparent and it was completely rigged, especially in Michigan. Based on these claims, the media outlets promoted an opinion that the United States could no longer have the global hegemony right and could no longer call for other’s commitment to democracy and free elections.

There is no evidence of widespread voter fraud in the United States: 62 out of 63 lawsuits filed by Donald Trump and his allies in state and federal courts seeking to overturn election results have failed. Ultimately, the Congress uniting both Republican and Democrat representatives certified the election results and confirmed Biden’s victory, leading to the inauguration of the 46th president of the United States. Georgia’s ultranationalist and pro-Kremlin actors were spreading information about the U.S. election fraud in anti-Western context, casting doubt on the effectiveness of Western democracy.

Prior to the U.S. presidential elections and in the aftermath, Donald Trump and his campaign team were actively talking about ballot rigging. Following the elections, ex-President Trump and his allies filed 63 lawsuits in state and federal courts seeking to overturn election results in states the president lost. The lawsuits involved allegations of double voting, illegal vote count, procedural and administrative violations, etc.

The vast majority of the lawsuits filed by Republicans were in six pivotal battleground states that Biden won: Arizona, Georgia, Michigan, Nevada, Pennsylvania and Wisconsin. Trump won five of the states during the 2016 elections, but Biden flipped each to the Democratic column four years later, in 2020.

Trump won only one out of 63 lawsuits in a minor case concerning a small number of ballots in Pennsylvania. Pennsylvania Secretary of State Kathy Boockvar made a decision to extend the deadline for voters to provide proof of identification if it was originally missing from their mail-in ballot. The deadline was extended from November 9 to November 12. Trump’s campaign team challenged the decision and the Pennsylvania Commonwealth Court ruled that Kathy Boockvar “lacked statutory authority” to change the deadline, adding that election officials were enjoined from counting any ballots that were cured during the extended deadline. However, not counting these ballots did not affect Biden’s win in Pennsylvania, where he garnered 81,660 votes.

Among the lawsuits filed by Republicans to overturn the election results, especially noteworthy is the Texas lawsuit filed by the state’s attorney general, Republican Ken Paxton on December 8. According to the lawsuit, Georgia, Michigan, Pennsylvania and Wisconsin (won by Biden) had engaged in election irregularities and their votes should not have affected the results pending investigation. Legal experts called the suit outlandish, because technically, the State of Texas was challenging four other states. The lawsuit was strongly supported by Republicans. However, on December 11, the U.S. Supreme Court rejected the lawsuit, because according to the U.S. constitution, any state has no right to challenge the elections held in other state or states.

Trump’s supporter, Republican Attorney General William Barr declared on December 1, 2020 that the U.S. Justice Department has uncovered no evidence of widespread voter fraud. Barr said that U.S. attorneys and FBI agents have not seen fraud on a scale that could change the outcome of the 2020 election.

Former Senate Majority Leader Mitch McConnell of Kentucky, as well as Republican Senator Pat Toomey of Pennsylvania and Senator Lindsey Graham of South Carolina noted that there is no evidence of widespread voter fraud and the issue about who actually won the election is beyond any doubt.

Following the announcement of final results, candidates can request recounts under certain circumstances, particularly if the margin between the candidates is less than a certain percent. For example, vote recount took place in two U.S. states following the 2020 presidential elections – Wisconsin and Georgia. According to the laws of both states, candidates can ask for a recount if the margin between them is less than 1% of the total votes cast.

The margin between Trump and Biden in Wisconsin was 0.6% and Biden gained more votes (257) than Trump (125) following the recount requested by the latter. As for the State of Georgia, Trump and his allies continued to maintain without evidence that the elections were stolen and rigged, demanding vote recount. The first recount in Georgia narrowed Biden’s victory from 14, 196 to 12,284 votes that did not affect the election outcome. Secretary of State Brad Raffensperger clarified that ballots went uncounted due to human error, adding that it was already eliminated and there was no evidence of systemic fraud.

According to Donald Trump and his allies, the process of elections was not transparent in Michigan and election observers were barred from participating in the process. Moreover, the windows of counting rooms were covered up to prevent challengers from viewing inside.

In fact, Republican and Democrat challengers were allowed inside the room at TCF center in Detroit where absentee ballots were being counted, but people from both sides were blocked from re-entering because maximum capacity had been reached. About 100 Republicans were present in the ballot counting room to view the process. As for the allegations about counting rooms being wrapped in “sheets of plywood,” after all challengers failed to enter the TCF center, they expressed protest trying to reenter the room that prompted poll workers to ask security guard to cover up the windows as they felt intimidated.

Other pieces of disinformation were also spread about the U.S. ballot fraud. For example:

Dominion machines have stolen Trump’s votes – Trump and his allies claimed that Dominion electronic voting system deleted 2.7 million Trump votes nationwide, while the company was owned by “Radical Left,” who opposed Trump and had links to the Nancy Pelosi family and the Clinton Foundation.

Voting by mail is the source of ballot fraud – few months before the 2020 presidential elections, Donald Trump claimed that voting by mail would bring thousands of rigged votes.

Voting and election specialists said there is no evidence that voting by mail led to massive voter fraud.