“Georgian Dream’s” arithmetic is based on electoral activity, NDI’s research – on total population 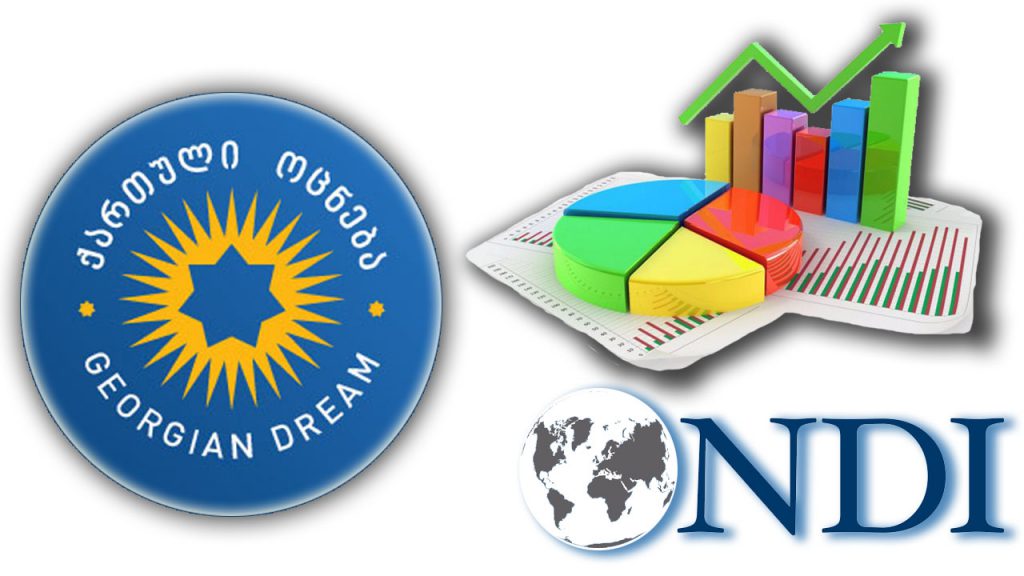 On January 16, National Democratic Institute (NDI) published the results of the public opinion poll held in the period from 19 November to 13 December, according to which Georgia’s ruling party’s and its leader Bidzina Ivanishvili’s rating has dropped again since April. The results of the research resulted in NDI discreditation campaign by the actors with ties to the pro-government and pro-Russian opposition. According to the discrediting statement, NDI rigs the research results and the pre-election surveys conducted by it do not correspond to the real results of the elections.

On January 17, Georgian National Communications Commission platform “Media Critic” published POSTV journalist Guri Sultanishvili’s comment on NDI research, which called  NDI’s methodology into question. According to Guri Sultanishvili’s interpretation, there is a significant difference between the NDI research and election results in 2012-2018, which raises questions about the reliability of the research. There is a statistics given in the explanation by “Media Critic”, where NDI’s public opinion poll percentages are compared to the amount of votes received by “Georgian Dream” party and its members in the elections. The schedule with the comparison was spread on January 17 by Facebook page “პოლიტიკური მოთვალთვალე” (Political spy), whose post was sponsored. 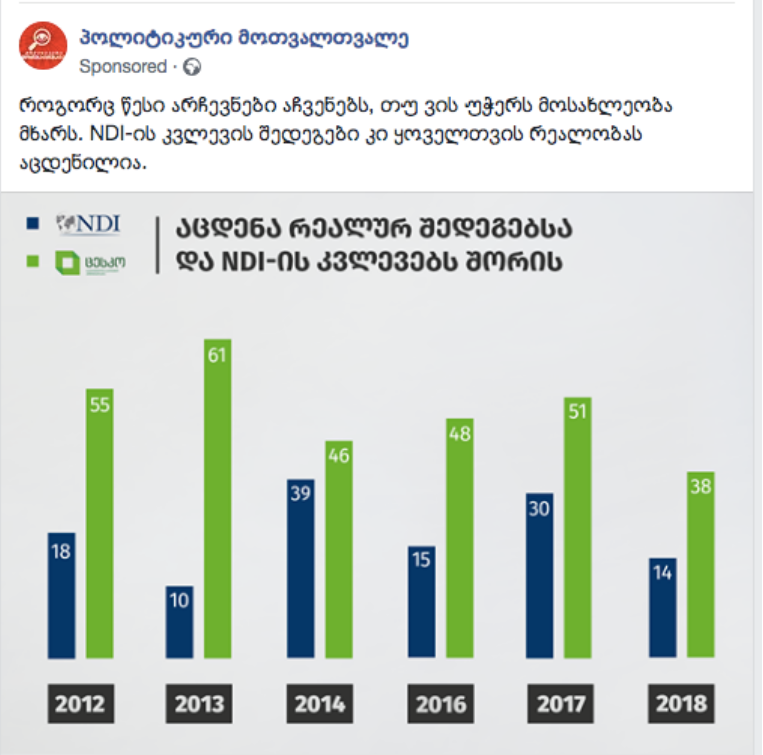 On January 21, NDI’s surveys were compared to the Central Election Commission’s (CEC) results in TV Imedi’s “Arena” show. Hosts of the show, Valerian Gorgiladze and Nutsa Shelia, along with other governmental actors, criticized NDI’s research and noted that the organization tries to create political mood artificially.

Comparison of NDI’s surveys with the results of the elections held in 2012-2018 presented by the Central Election Commission is irrelevant. 1) The Central Election Commission (CEC) calculates the election results not from the total population, but based on the electoral activity; 2) An essential indicator in NDI’s researches is the amount of “indecisive” respondents, which creates the final picture of the elections; 3) NDI, as well as other research organizations does not calculate the election results, but study public attitudes in the population, that may change in the election process due to various factors (For example, prison scandal, bribing voters).

NDI’s survey results are represented based on Georgia’s total population, while the Central Election Commission calculates the percentage of the election results based on the population that was at the electoral districts.

For instance, the votes received by “Georgian Dream” in 2012 made up 55% of the voters participated in the elections, while according to the data of NDI’s  survey of August 2012, “Georgian Dream’s” rating (12 %) is represented based on the total population of Georgia.

Activity in 2012 parliamentary elections was 61%, accordingly, 55% out of 61% of the registered voters voted for “Georgian Dream” party, which is 33% of the population registered in the elections. 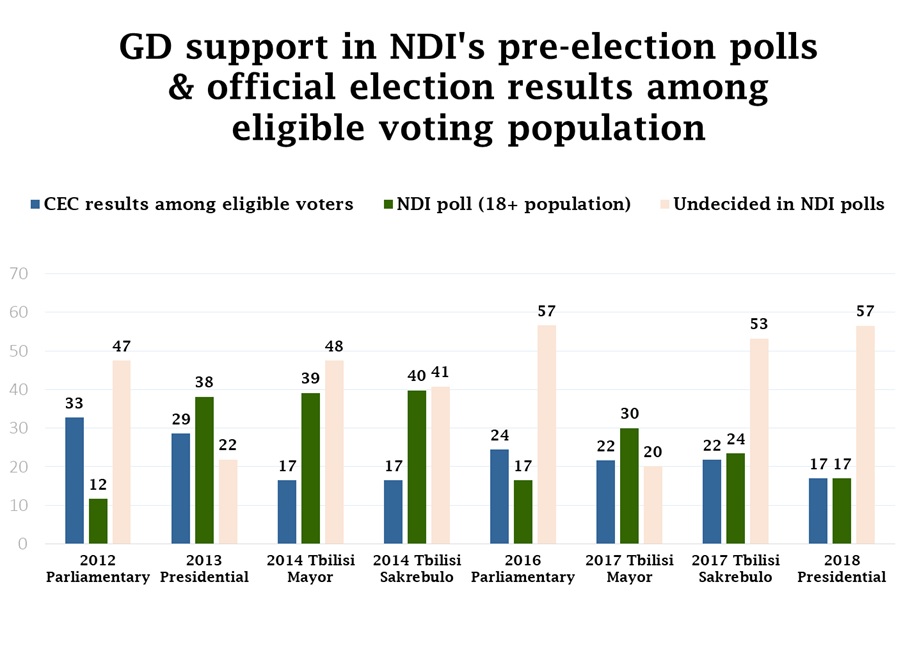 Explanation: 2014 Tbilisi mayoral election and 2018 presidential election results are processed according to the first round

The schedule shows the statistics of the 2012-2018 elections results. The first column shows the percentage of the votes received in the elections out of the total amount of voters registered according to Central Election Commission data. Second and third columns show NDI’s survey results: support for “Georgian Dream” and indecisive population.

As the schedule shows, the amount calculated from the registered voters in 2012-2018 and NDI’s pre-election survey results are close to each other and in some cases, in accordance with NDI research, rating of “Georgian Dream” party’s candidates even exceeds the result received in the election. Noted picture directly denies government’s narratives, as if NDI is affiliated with UNM party and falsified the research in their favor.

The 2012 parliamentary election is the only case, when significant difference between election results and  NDI’s pre-election research has been recorded. Indecisive respondents in polls made up 47%, which represents an important factor influencing on final outcome of the elections and their decision during pre-election period was is connected with the developments. It should be noted that NDI’s research was conducted in August 2012, while scandalous prison footage was released in September, which significantly lowered the rating of the United National Movement. According to the  Western media’s interpretation, spread of prison video footage might have been one of the main factors affecting 2012 parliamentary election results. NDI Georgia Office Director Luis Navarro noted in 2012 that part of the population, which had not finally decided which concrete party it would support, made the choice exactly after the prison scandal.

The aim of NDI’s polls is a public opinion research across the country and showing main tendencies of the opinions existing in the population, in order to help political parties understand electorate’s attitude and plan their election campaigns accordingly. Voter’s activity in the elections and their decisions depend on the variety of factors, including the events having occurred during the pre-election period. For instance, in 2012 elections, releasing the footage of inhumane and cruel treatment towards prisoners influenced public attitude, after which then ruling party National Movement’s support fell sharply according to Forsa polls.

Forsa organization conducted a survey  with the question: “Which party would you vote for if the elections were held next week?” on August 17-30, before prison footage was released  and after footage was released on September 20-26. As a result, “Georgian Dream” party rating increased by 16 points (65%), while “United National Movement” party’s rating lowered by 18 points (25%). 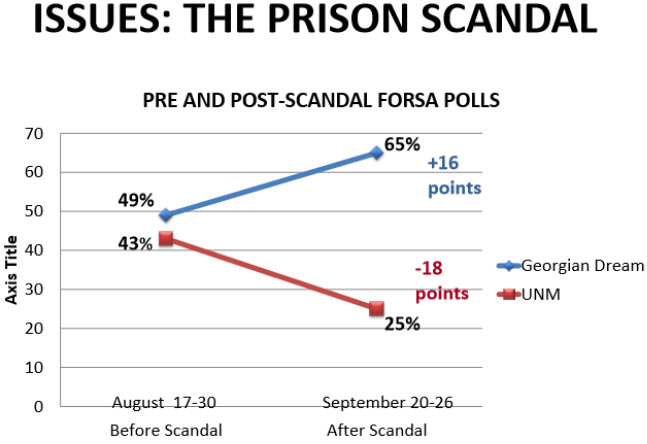 Indecisive voters may also be influenced by the factors such as misuse of administrative resources (release from work) or bribing the voters (cancelling the credits) and other, as international and local observers indicated on 2018 elections. It should be noted that Articles 47 and 48 of the Election Code prohibit bribing the voters and using of administrative resources for pre-election agitation.

OSCE: “Cancelling credits of 600,000 citizens (in total amount of 1.5 billion GEL) by government before the second round of the elections, which would be financed by private financial institute that has ties with „Georgian Dream’s” chairman, as well as other initiatives announced by national and local government bodies, which meant various forms of assistance to the citizens, was a variety of vote-buying, which is prohibited by the election and criminal code.”

ISFED: “The decision about the annulment of financial obligation of 600,000 citizens in total amount of 1.5 billion GEL, announced by Georgia’s Prime Minister Mamuka Bakhtadze in the pre-election period of the second round has a character of bribing the voters of an unprecedented scale. Apart from this program, according to organization’s observers, the facts of offering certain amounts in exchange for votes for Salome Zurabishvili were recorded in various municipalities.”

OSCE:  “Cases of misuse of administrative resources were in the surveillance area of the observation mission. In addition, participation of governmental party’s representative high level officials in election campaign did not always correspond to the existing requirements of the legislation, which obscured the boundaries between the State and the governing party.”