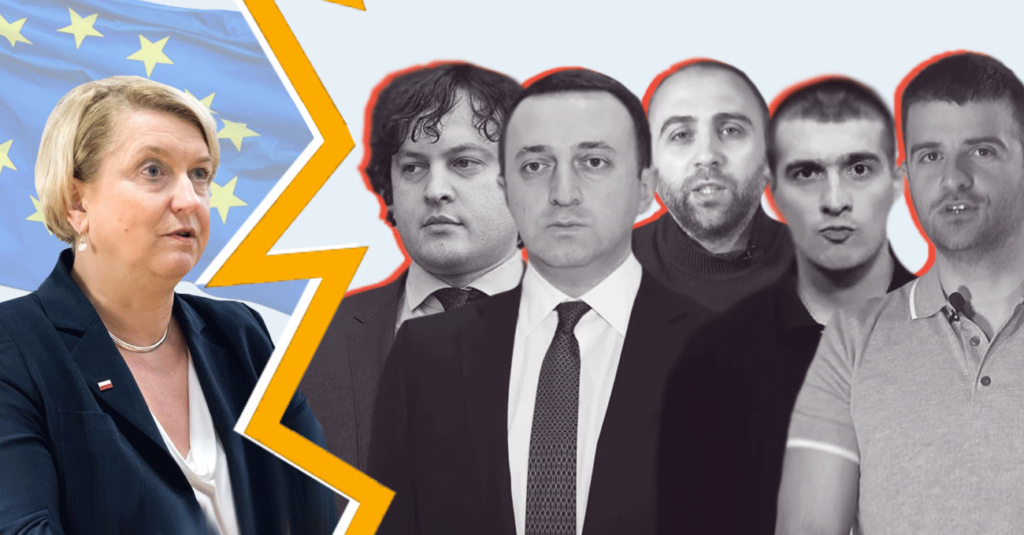 The arrest of the former President of Georgia, Mikheil Saakashvili, became the subject of scrutiny for several members of the European Parliament. On November 12th, MEP Anna Fotyga arrived in Georgia to visit the ex-president Saakashvili in prison, but she was denied. The Minister of Justice, Rati Bregadze, named the Georgian Criminal Codeas the reason behind the refusal, asserting that only specific persons envisaged by the Code could visit Saakashvili. In addition, the Minister of Justice asked Anna Fotyga to explain why she mentioned the term “political prisoners” in her letter.

Both the criticism of the MEPs and Anna Fotyga’s visit to Georgia were followed by rapid responses from the Georgian authorities and anti-Western violent groups. In some cases, the contents of the messages directed at the MEPs coincided.

The messages were disseminated by the representatives of the Georgian government, pro-governmental experts and anti-Western actors:

Georgian Dream MP Shalva Papuashvili, as well as pro-governmental expert Gia Abashidze, movie director Goga Khaindrava and “Georgia and World” journalist Jaba Zhvania stressed that the calls of the MEPs represent the opinions of individual politicians and not the position of the EU in general.

Alt-Info hosts Irakli Martinenko and Giorgi Kardava argued that Saakashvili’s return to Georgia was a plan of the West and, in particular, the United States:

Irakli Martinenko, Host at Alt-Info: “It is clear now. The arrival of the MEPs proves that Misha’s arrival in Georgia was a Western plan, and now all plans have failed, so that Misha surrendered and fell into prison.”

Giorgi Kardava, Host at Alt-Info: “It comes with no surprise that the United States is overseeing Saakashvili in this case. This whole theatre we have been watching for two months now, everything was agreed with the Americans, there is no doubt about it. Even the Georgian Dream knows about it, but it cannot voice it, it cannot speak openly about it because the Georgian Dream is also a liberal force, and the whole system, on which we have been standing for 30 years, will collapse.”

During the Euronest Parliamentary Assembly on November 11th, MEP Viola von Cramon spokeabout Georgia and Ukraine, stating that these countries be given the initiative, but the EU has to make sure that these countries are working towards the implementation of the Association Agreement. Cramon stated that there is a noticeable lack of interest in the ruling elites of Georgia and Ukraine, which should not be answered by rewards.

In response to the MEP’s statement, Dimitri Lortkipanidze, head of the Primakov Georgian-Russian Community Center, wrote on his Facebook page that Cramon should be “whipped” and declared a persona non grata. The same idea was expressed by Dito Bidzinashvilion his Facebook page and the Founder of “Georgian Idea,” Levan Chichua. 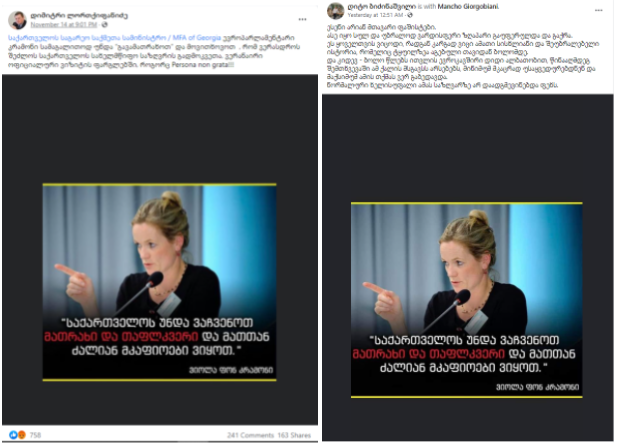 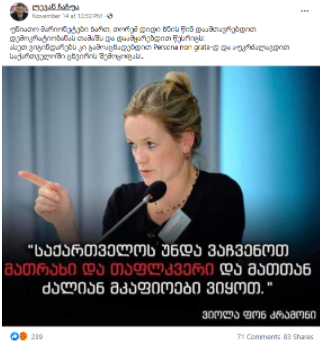