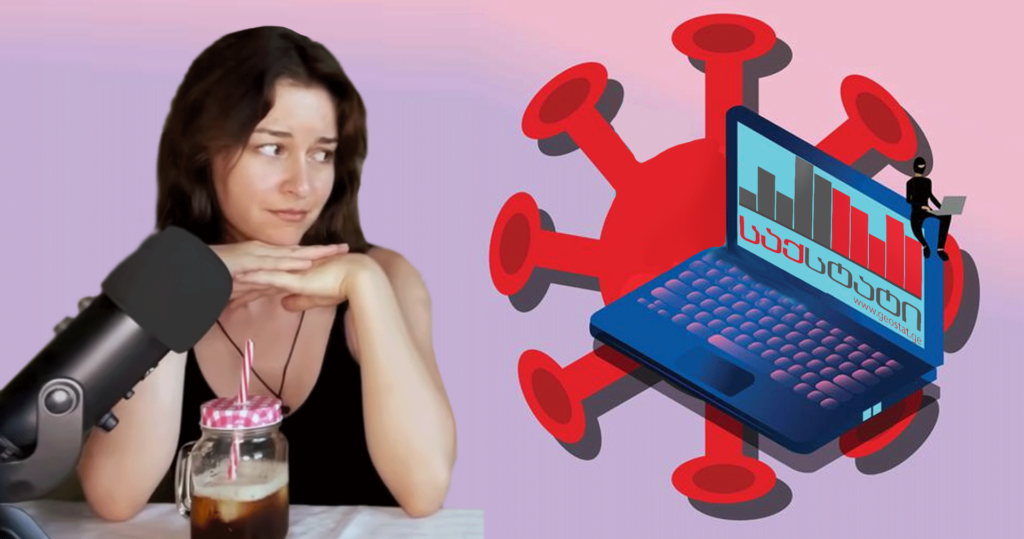 On August 14th, the Facebook user Natia Colussi published a post showcasing the mortality rate in Georgia from 2014 to 2020. Colussi claims that the number of deaths in 2020 was 234 less than in 2016. She has also emphasized the number of people that have died due to the circulatory system and cancer. A similar post was shared by the Facebook user Dato Tsurtsumia, claiming that COVID-19 did not impact the overall death rate in Georgia. The data of 2019 were published by the user Koba Kuprashvili, who highlighted the number of deaths caused by the respiratory system and proclaimed that seeing the data of 2020 would be interesting, hinting that the numbers are not drastically different. 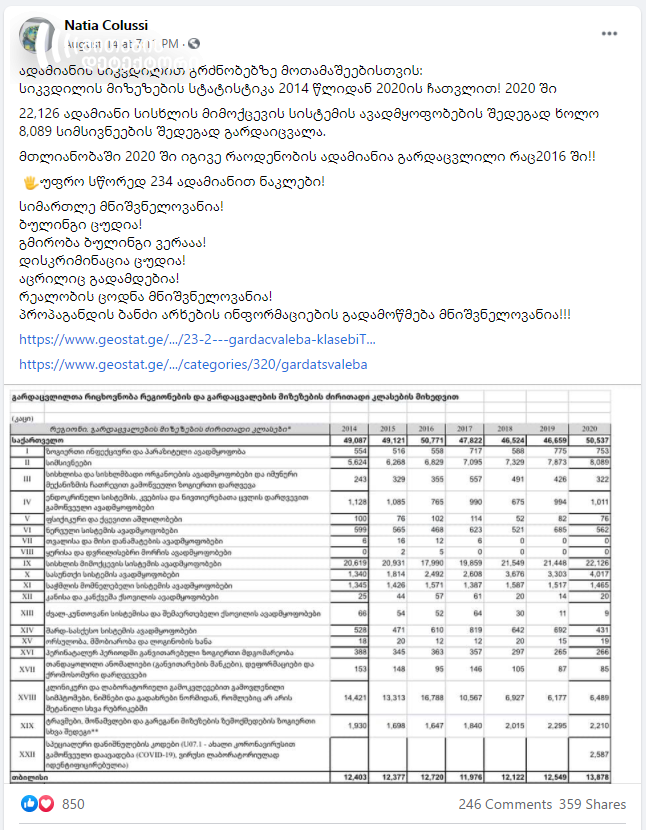 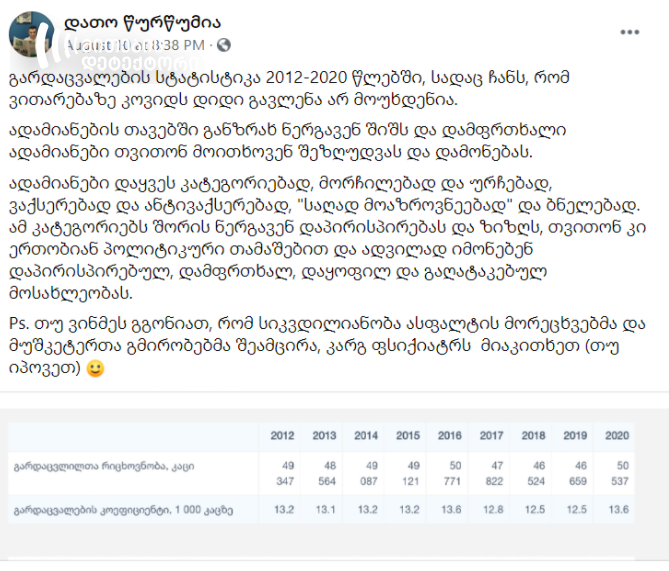 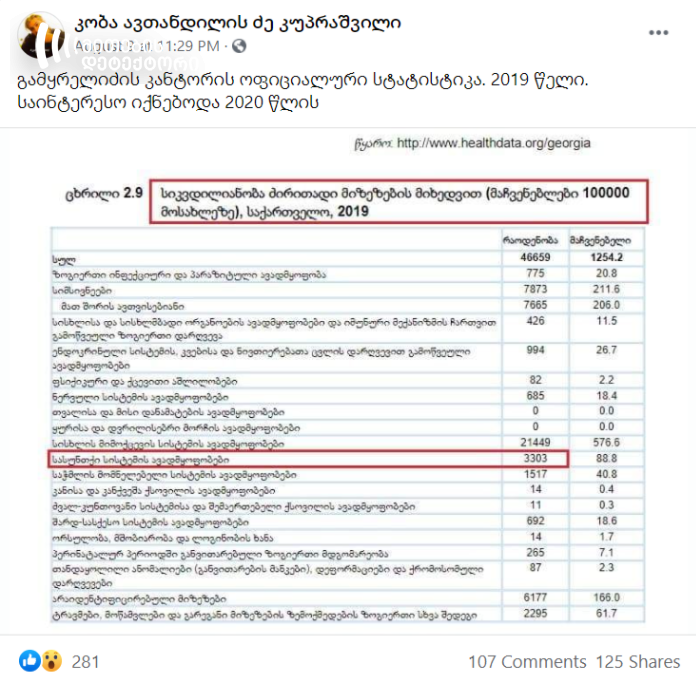 The posts of Colussi, Tsurtsumia and Kuprashvili are manipulative, as the statistic shows that since 2016 the mortality rate was dropping in Georgia. The tendency changed only after the emergence of the pandemic, and the mortality rate has returned to that of 2016.

The statistical data used by Natia Colussi shows that the number of deaths was constantly decreasing since 2016, and it only started to grow again in 2020, during the emergence of the COVID-19 virus. 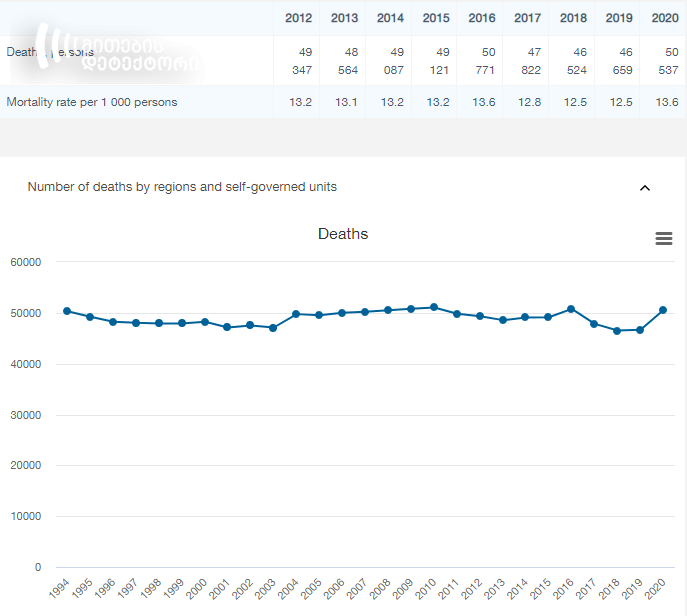 According to Geostat, the mortality rate increased in November and December of 2020. By October 31st, 2020, Georgia had 307 COVID-related deaths. By November 30th, the number has reached 1267, while by the end of the year, a total of 2505 people had lost their lives to the disease. 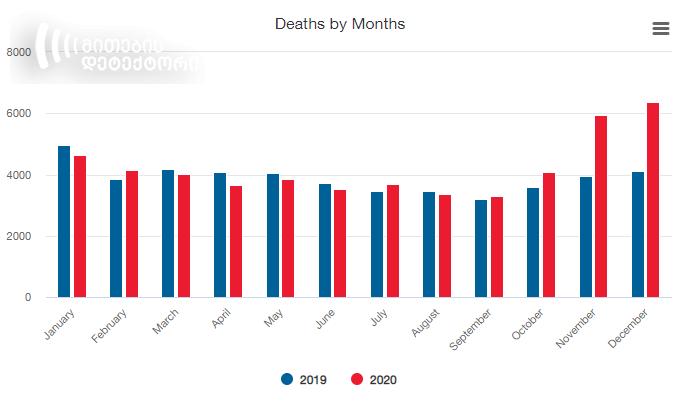 The same tendency can be detected in other countries as well. For instance, according to the EU Mortality Monitoring Activity Project, all of the 27 member states experienced a rapidly growing number of deaths in 2020-21 compared to 2019.

As for the data presented by Kuprashvili regarding the deaths caused by respiratory diseases, the number has increased to the point of 4017 in 2020; nonetheless, the deaths caused by the coronavirus per se can be found in a separate column. According to the final statistical data of 2020, 2587 people have died due to COVID-19.

It is essential to mention that since 2016, the number of deaths related to several other diseases (Genitourinary system-related diseases, blood-related diseases) has also decreased.

The data of the National Statistics Office of Georgia have been manipulatively used before to prove the pandemic does not exist. For more, see:

Natia Colussi herself has been found spreading conspiracies regarding a number of topics. For example, see the articles of “Myth Detector”: