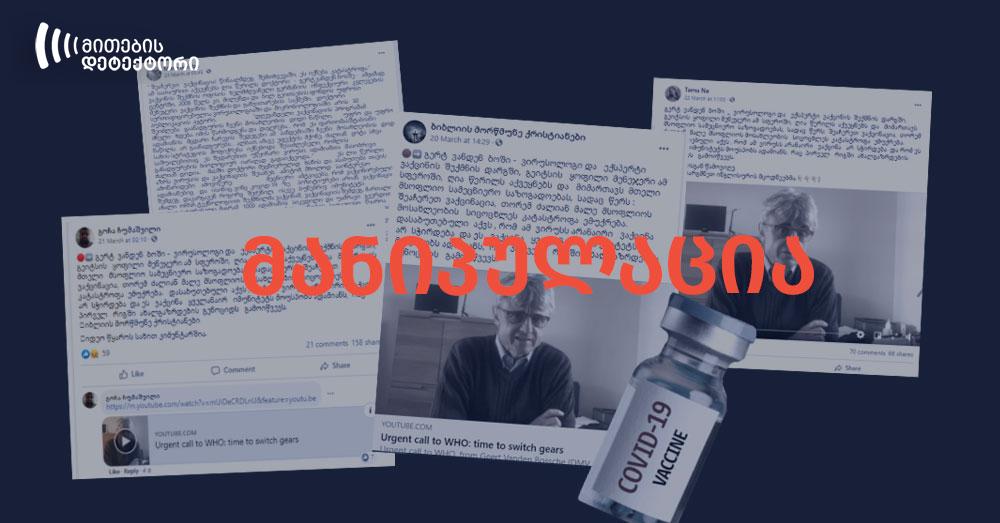 On March 20, Facebook page “ბიბლიის მორწმუნე ქრისტიანები” (Bible Believing Christians) published a post, according to which Geert Vanden Bossche, a Belgian virologist, released an open letter, where he claims that a vaccine is not needed to develop immunity to COVID-19 and that mass vaccination will be equal to genocide against humanity. The post is accompanied by the link to a YouTube video, in which Bossche calls on the World Health Organization to suspend the vaccination and quarantine restrictions. 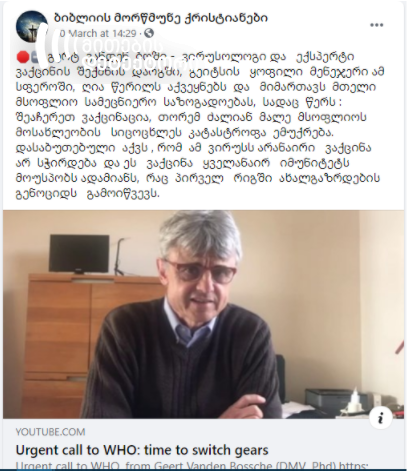 On March 21-22, anti-vaccine Facebook users Gocha Chumashvili, Tamu Na and Mano Beridze published posts about Geert Vanden Bossche. The posts published by Gocha Chumashvili and Tamu Na are identical to the post of Bible Believing Christians, while Mani Beridze dedicated a lengthy post to the virologist’s open letter, according to which vaccination will completely destroy immune system, because vaccines cannot effectively stimulate immune system and boost it against viruses. Mano Beridze also notes that coronavirus is similar to influenza virus, while COVID-19 mRNA vaccines are toxic and they cause death, cancer and inflammation that is also confirmed by the U.S. National Institutes of Health (NIH). 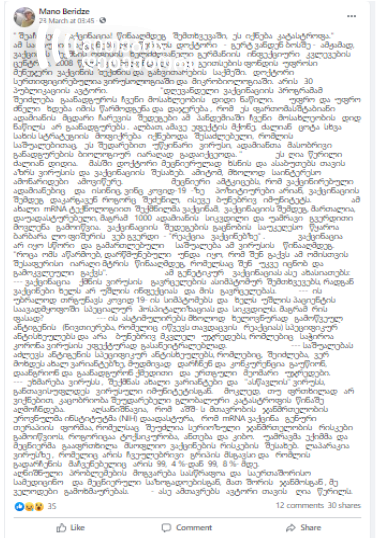 The claims made by Facebook’s anti-vaccine pages about alleged threats posed by universal vaccination are manipulative. Geert Vanden Bossche really released the open letter; however, his predictions about the coronavirus vaccines lack scientific evidence and, as scientists claim, they are based on speculations and false assumptions. Moreover, Mano Beridze’s claim as if COVID-19 mRNA vaccines cause death, cancer and inflammation is not true.

Geert Vanden Bossche released the open letter to the World Health Organization (WHO) on March 6, 2021. According to him, he is sure that COVID-19 vaccines may cause “disastrous consequences” and therefore, the international community should immediately suspend the vaccination campaign. To popularize his letter, Bossche gave an interview to a famous anti-vaccine website, Children’s Health Defense. On March 13, he published the letter on his Twitter account. Later, on March 15, Bossche created his own website, thus promoting the popularization and viral spread of his letter among anti-vaccine groups.

Several scientists responded to Bossche’s letter through various online platforms and strongly criticized him. The letter consists of five pages involving mainly theoretical and hypothetical opinions. The letter does not contain any empirical data or scientific evidence that would prove Bossche’s predictions for the pandemic and COVID-19.

Jonathan Jerry of the Office for Science and Society at McGill University notes that Bossche’s “alarming manifesto” makes a number of incorrect or exaggerated claims about the use of mass vaccination during a pandemic. Data from the vaccine clinical trials and from countries that have vaccinated a large percentage of their population do not confirm one of his main assumptions that the coronavirus vaccines will allow the virus to keep being transmitted from person to person. Clinical trials of three main COVID-19 vaccines (Pfizer, Moderna, AstraZeneca) have shown that though not completely, vaccines can significantly lessen the chances of infection that will ultimately reduce virus transmission. In addition, scientists note that studies are still underway to reveal whether vaccines have real effect on virus transmission. However, preliminary findings of some studies are quite encouraging. For example, according to the preliminary findings of several studies conducted in Israel, vaccines significantly reduce virus transmission among both symptomatic and asymptomatic patients. The primary data of several studies conducted in the UK showed the same results. Thus, Bossche’s assumptions about low efficacy of vaccines against virus transmission are not proven by empirical data.

Edward Nirenberg, a science blogger, writes that even if COVID-19 vaccines do not have a significant effect on transmission, they will still protect people against the spread of infection. In his lengthy article, Nirenberg gave detailed answers to all basic claims made by Bossche. He noted that even if the coronavirus vaccines fail to stop transmission, they can prevent the spread of virus, citing an example of Marek’s disease, a viral illness of birds with a vaccine that does not strongly affect transmission but it still shows meaningful public health benefits in the populations of chickens where it is used. Nirenberg reiterated that clinical data for the coronavirus vaccines do not confirm that vaccines cannot prevent the spread of infection.

Bossche cites the spread of highly infectious variants of the coronavirus in the future as the key argument behind his claim about “disastrous consequences” of vaccination. He claims that the existing COVID-19 vaccines will promote the emergence of such virus strains, which will be more resistant to vaccines and thus prove lethal. Otto Yang, professor of medicine at the David Geffen School of Medicine at the University of California, said that Bossche’s predictions are absolutely incorrect, as they contradict basic biology. In fact, viral evolution generally favors becoming less pathogenic, because survival of the host is obviously important for survival of the virus. In addition, Dr. Anthony Fauci, Director of the U.S. National Institute of Allergy and Infectious Diseases, and health experts note that viruses cannot mutate if they do not replicate, and if you stop their replication by vaccinating widely. Thus, the only way to avoid new mutations is to achieve “herd immunity” against the virus through vaccination.

Another important counterpoint to Bossche’s claim is that SARS-CoV-2 low mutation rate suggests that a vaccine, as well as the immunity developed in recovered patients, could provide long-lasting protection compared to vaccines against influenza, which are rendered obsolete as the virus mutates. At the same time, flexibility against mutations is another advantage of COVID-19 vaccines as they can simply be reformulated to match new variants of concern. Such approach is not new in medicine and it has been widely used in respect of influenza virus, as the influenza virus drifts and shifts and the vaccine needs to be reformulated to be a better match for the specific viruses that are predicted to be common during the next flu season. This is a reason why a new flu vaccine is made each year.

Besides discussing Bossche’s assumptions, Mano Beridze’s post claims that COVID-19 mRNA vaccines are dangerous and cause serious adverse events, such as cancer, inflammation and death. Mano Beridze notes that this information is provided on the official website of the U.S. National Institutes of Health (NIH). Beridze’s claims are not true. In fact, the website’s section about COVID-19 Vaccine Questions and Answers says nothing about mRNA vaccines causing cancer, inflammation and especially deaths. Furthermore, none of mRNA vaccine clinical trials name cancer or inflammation among side effects.

See detailed information about side effects and safety of mRNA vaccines in Myth Detector’s articles: