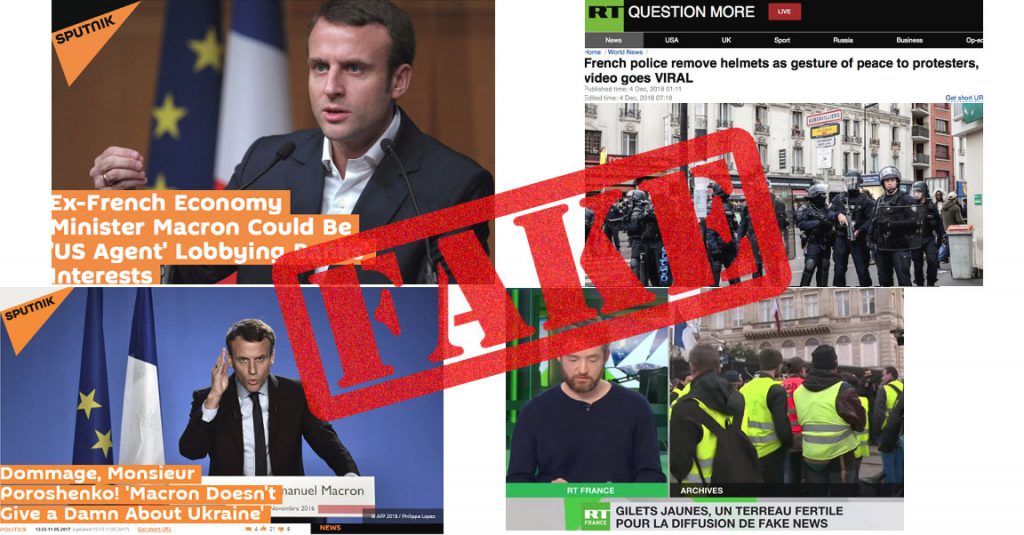 On February 4, 2019, Sputnik Abkhazia published a Facebook post of the official representative of the Russian Foreign Ministry Maria Zakharova, regarding accusations by Macron of Sputnik and Russia Today. According to the article of Sputnik, Macron stated that Sputnik and Russia Today manipulate French media via social network accounts. As a response, Maria Zakharova noted that Macron’s accusations are false and lack evidence. She stated that Macron himself is a main producer of fake news in France.

Lie N1.  “Macron is a “US Agent” and “Wealthy Gay Lobby” interests’ holder”

On February 4, 2017, Sputnik International published an article, which mentions Macron as a “US Agent“ and a “lobbyist of the interests of US banks’”. In addition, Macron’s candidacy was considered the result of a conspiracy and he was connected to a “very wealthy gay lobby”. 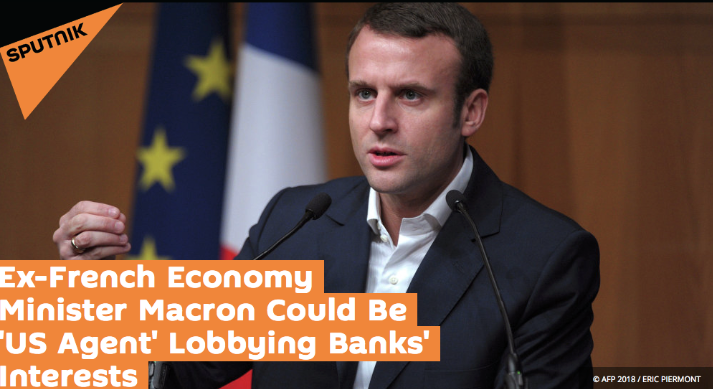 Sputnik and RT showed a video, where the police in the French town of Pau was removing helmets. It has been interpreted as an act of solidarity with protest participants. However, local police and journalists noted, that in fact police had removed helmets in order to talk to the demonstrators before putting them back on. According to EUvsDisinfo, after Bloomberg’s article Sputnik and RT were forced to publish corrected information, noting that the act of police has not been a sign of solidarity with protesters. 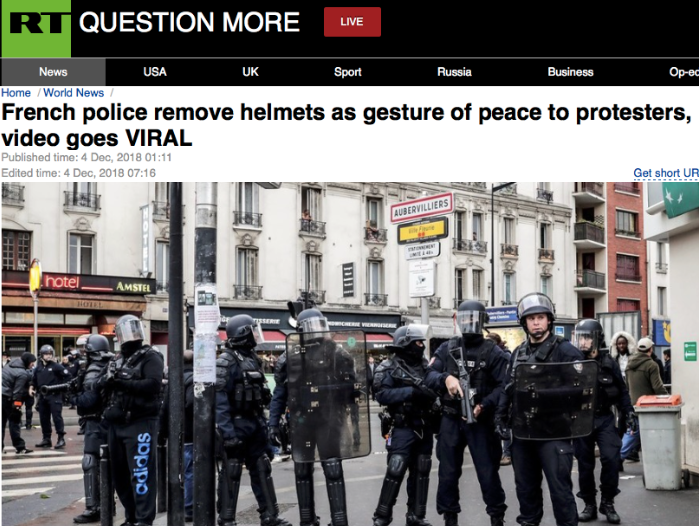 The article published by Sputnik on May 11, 2017, presents Nikolay Platoshkin’s opinion (Head of the Department of International Relations and Diplomacy of Moscow University for the Humanities) about the Presidential election in France and Macron’s victory. According to Platoshkin, Macron, unlike his predecessor, is indifferent to Ukraine. Sputnik added an editorial comment to the statement of its respondent and noted that Ukraine would face “serious challenges” during the presidency of Macron.
This statement was checked by EUvsDisinfo according to which this argument is not supported by the evidence. Moreover, there have been several occasions when Macron publicly expressed his support to Ukraine and Minsk agreement. In addition, Macron has also supported EU sanctions imposed on Russia over Ukrainian crisis. 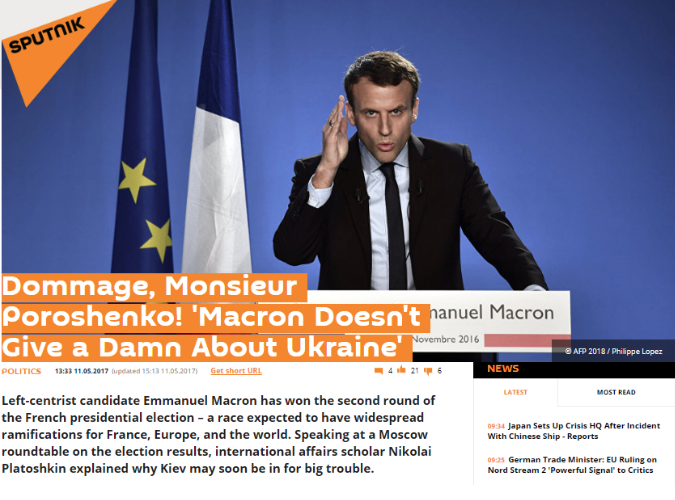 In January 2019, RT France published a video, declaring that Macron distributes fake news about Russian meddling in Brexit and Catalonia referendums and vote manipulation by Russia. It should be noted, that UK parliament published a special report, which provides an evidence for Russian interference.  EUvs Disinfo relies on the report of  “89 up” (A company, which works on digital technologies and communications), according to which during the Brexit referendum RT and Sputnik had more reach on Twitter than Vote Leave and Leave.EU. In addition, more than 156 thousand Russian accounts have been found that published more than 45 thousand messages about Brexit during the last 48 hours of campaign. 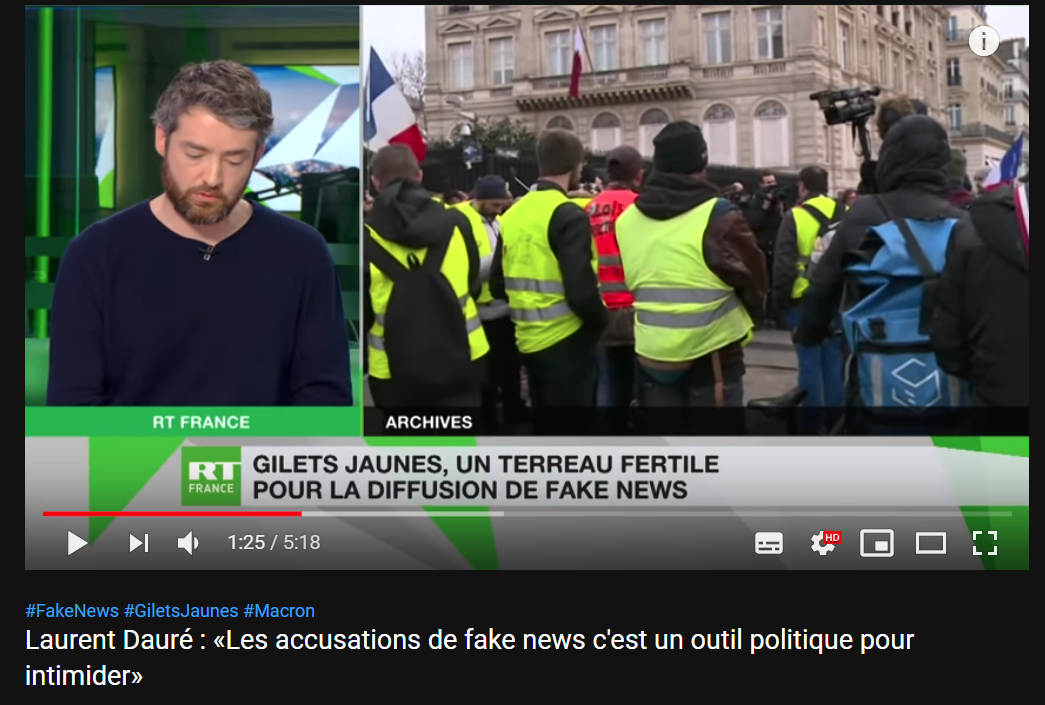 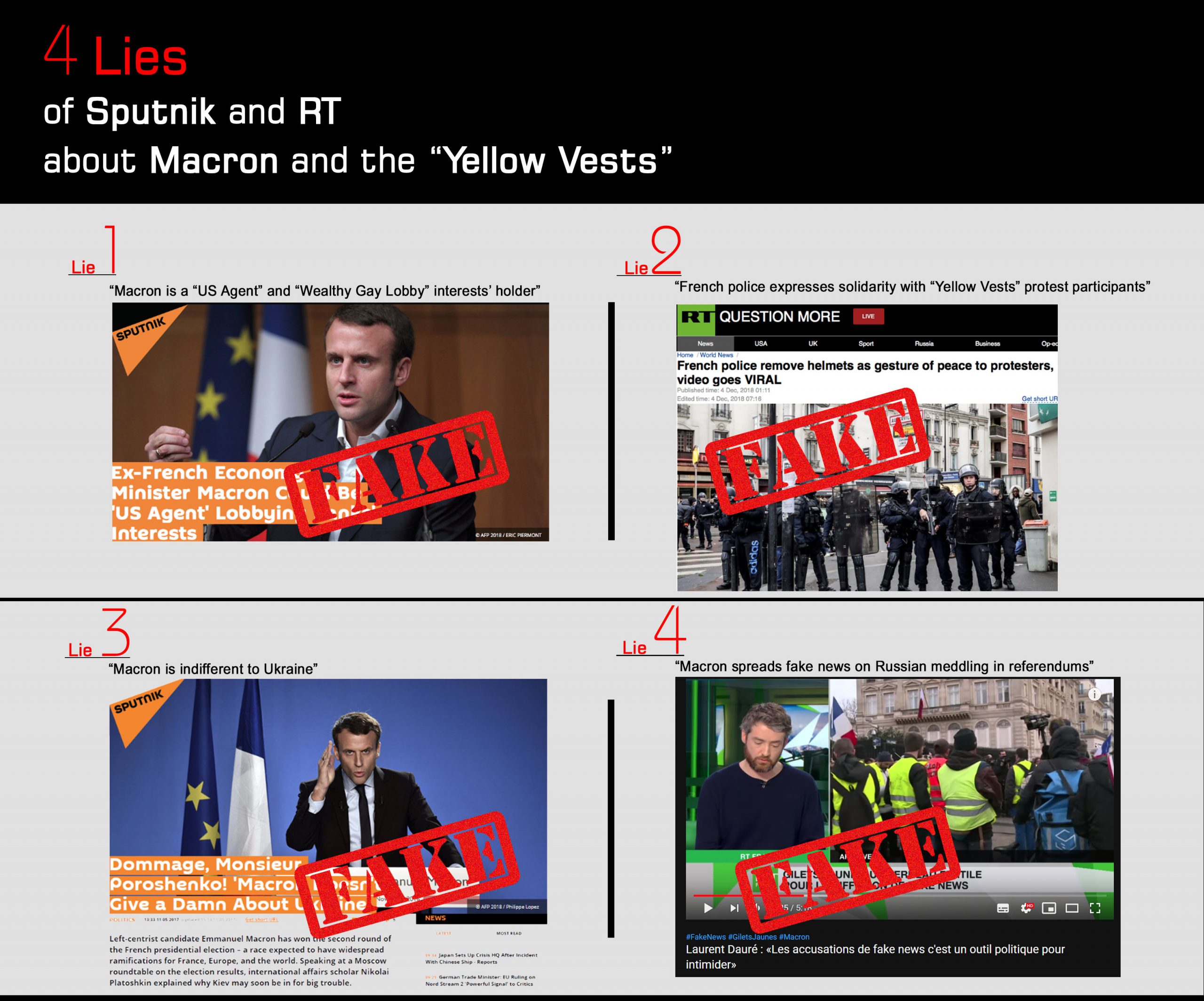 On May 29, 2017 in a joint press conference with Vladimir Putin President of France Emmanuel Macron noted, that RT and Sputnik represent tools of Russian influence,  that spread disinformation during 2017 French presidential election.

In 2017, Macron campaign team banned RT from Presidential election events. According to Macron spokesperson, RT and Sputnik represent a “two-headed entity”, spreading Russian state propaganda and fake news. The problem, as he points out, is that “dissemination of fake news is systematic”.

According to Guardian, accusations by Macron’s team, which included attacks on campaign’s networks, databases and sites coming from Russia, has irritated the Kremlin. It only fuelled the fires of suspicion that Russia aimed to support Marine Le Pen by undermining Macron’s election campaign.

According to EUvsDisinfo, the information spread by RT and Sputnik always corresponds to the priorities of their sponsors and coincides with their political lines. Their product is under the Kremlin’s direct control.

Macron is not the only one, who accuses Russia Today and Sputnik of meddling in political processes. In a report issued by US intelligence, RT and Sputnik were named one of the main tools of Kremlin for manipulating public opinion during US Presidential campaign held in 2016.

Sputnik and RT were also considered in an adopted by European Parliament resolution (2016) which included the strategy for combating propaganda spread in Europe by Russia. According to the resolution, Sputnik and RT represent a threat to a European unity.

In 2017, EUvsDisinfo published an analysis, which provides three facts on RT and Sputnik. First, these two media are not independent. Sputnik is fully funded by the Russian government, and RT – was created by a Presidential Decree. Secondly, these two publications are partial and receive instructions from Kremlin every week. Thirdly, they produce and spread fake stories, aiming to promote political objectives.