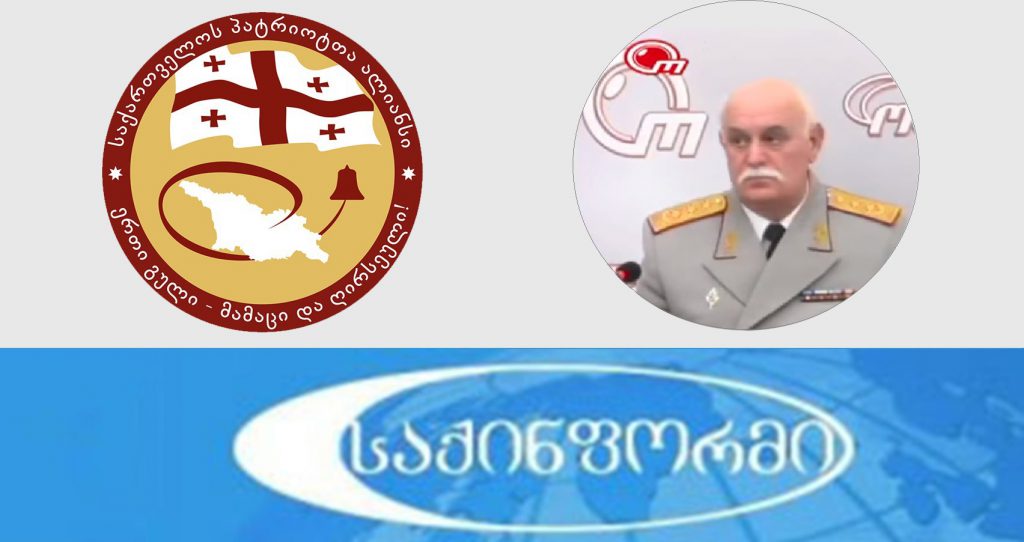 In a telephone conversation with Obieqtivi TV on November 26, 2018, Avtandil Enukidze of the pro-Russian Alliance of Patriots party spoke about Russia’s attack on Ukrainian ships in the Kerch Strait, claiming that the Ukrainian ships violated the law, as their movement was not agreed with Russia and that the incident was provoked by Ukrainian President Petro Poroshenko. The message was later echoed by General Guram Nikolaishvili in the same TV program, who claimed that violation of the Russian border by the Ukrainian side was a PR campaign staged ahead of the presidential elections. On November 27, Sakinform, a pro-Kremlin online edition, also released a special statement on the Kerch Strait developments, linking the skirmish to President Poroshenko’s interests to postpone the upcoming presidential elections by declaring a martial law.

The messages voiced by Georgian media outlets about the developments in the Kerch Strait and the Sea of Azov aimed at justifying Russia and blaming Ukraine for the incident. The Alliance of Patriots party, Sakinform and Guram Nikolaishvili are directly echoing the pro-Kremlin narrative. In fact, 1. Russia’s militarization of the Sea of Azov is illegal; 2. Ukraine does not need Russia’s permission to move its ships through the Kerch Strait; 3. Russia opened fire at the ships after they had retreated; 4. Ukrainian ships have not crossed Russia’s border entering its territorial waters; 5. The martial law ends in late December and the presidential elections are scheduled for March.

Russian message No.1. Ukrainian ships had no right to pass through the Kerch Strait without Russia’s permission.

Fact No.1. Free movement of the ships swimming under the Ukrainian flag is regulated by the bilateral treaty signed between Russia and Ukraine in 2003. Russia’s militarization of the Azov Sea is illegal.

According to EU vs. Disinformation, Russia started to construct the Kerch Bridge without Ukraine’s consent that constitutes another violation of Ukraine’s sovereignty and territorial integrity. It has led, in parallel with the militarization of the Azov Sea, to tougher controls on naval traffic in the strait. The European Union called on Russia to restore freedom of passage at the Kerch Strait and to stop the inspections.

Russian message No.2. Russia’s attack on Ukrainian naval vessels in the Black Sea was Ukraine’s provocation.

Fact No. 2. Three Ukrainian ships were passing through the observance of international law from the Black Sea into the Sea of Azov, where both Russian and Ukrainian ports are located, but Russia closed  the Kerch Strait. Despite it, the Ukrainian Navy did not use force. Russia’s coast guard opened fire at the Ukrainian ships after the latter started retreating.

That Ukraine wanted to avoid escalation is confirmed by the fact that its naval forces had  informed, the Russians in advance of its plan to move its ships, although following Russia’s annexation of the peninsula, the Kerch port and strait illegally fell under Russia’s actual control.

Russian vessels illegally blocked passage through the Kerch Strait and did not allow the Ukrainian ships to enter. Russian coast guard opened fire at the Ukrainian ships after the latter were retreating. The vessels were even seized. The Russian Federation involved aviation and anti-ship missiles. Six Ukrainian sailors were wounded.

Russian message No. 3. The Ukrainian ships violated Russia’s territorial waters (12 nautical miles from the country’s coastal line). Therefore, use of force by Russia was legitimate.

Fact No.3. The Crimea peninsula has been annexed by Russia since 2014, but not a single state recognizes it as part of Russia. Moreover, Russia seized the vessels beyond its self-proclaimed border.

The Russian side  accuses , Ukraine of violating its territorial waters. According to the United Nations Convention on the Law of the Sea, every state has the right to establish the breadth of its territorial sea up to a limit not exceeding 12 nautical miles, measured from baselines determined in accordance with this Convention. In this particular case, Russia recognizes Crimea as its own territory, but according to international law and international community, Crimea is part of Ukraine. Thus, the Ukrainian vessels could not have violated the law.

In addition, according to the  map released by the Ukrainian Ministry of Temporarily Occupied Territories and IDPs, Russia seized Ukrainian vessels beyond 12 nautical miles from the Crimea coastal line. 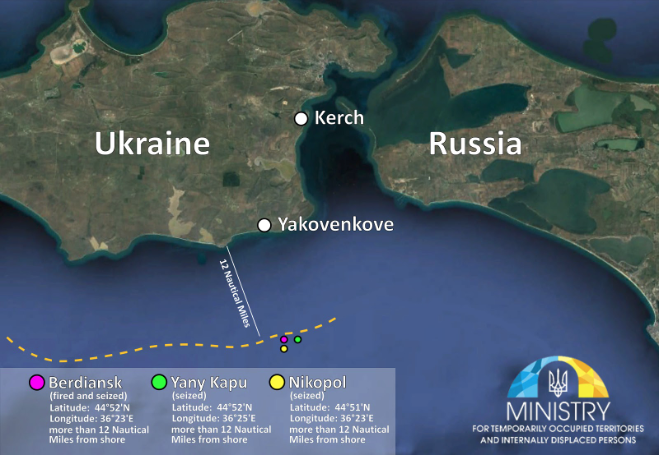 Russian message No. 4. Ukrainian President Petro Poroshenko deliberately staged a provocation to have the reason for declaring the martial law and to postpone the presidential elections scheduled in Ukraine for March.

Fact 4. The martial law introduced by President Poroshenko entered into force on November 28 and it will last for 30 days. The martial law will be lifted in late December and it can have no influence on the elections scheduled for March.

The remarks made by Avtandil Enukidze of the Alliance of Patriots and General Guram Nikolaishvili about the developments in the Black Sea, as well as the statement released by Sakinform are identical to those messages, which are being disseminated by the pro-Kremlin media outlets. According to EU VS Disinformation, Russian media outlets, among others Russia-1 (in its November 25 – 26 stories), ПЕРВЫЙ КАНАЛ,  Rusvesna.su, Ria-  ФАН, Russia Today suggest that the November 25 incident was “a deliberate provocation” staged by Ukraine, particularly President Poroshenko against Russia.