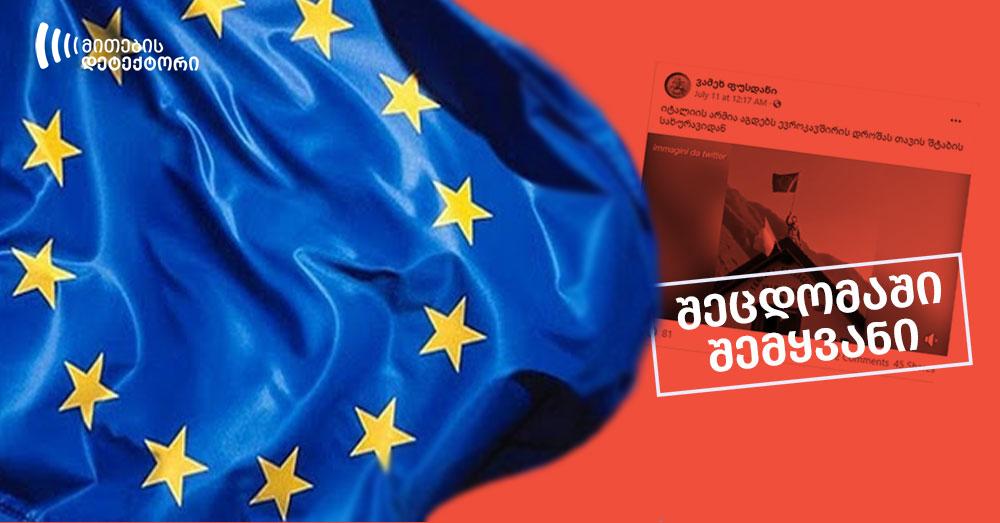 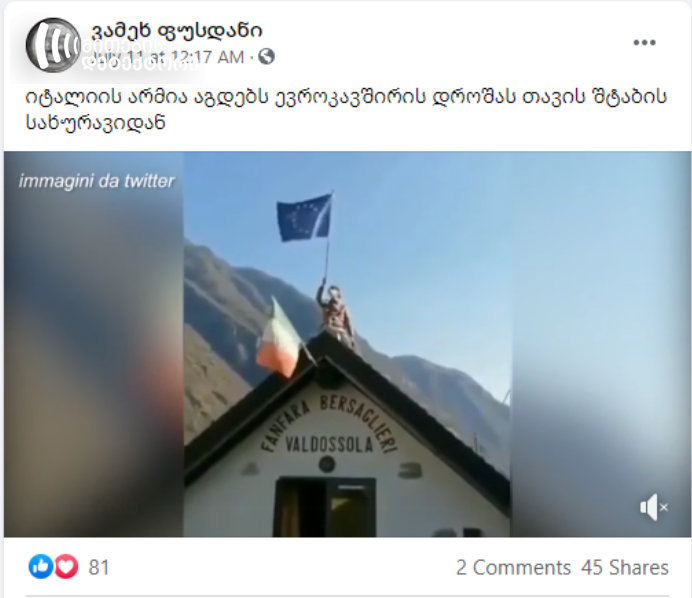 The video published by Vamekh Fusdani is misleading, as it creates a false impression that the Italian Army has dropped the EU flag from its own headquarters, and the shared footage expresses the official standpoint of the Italian Army. In reality, in April 2020, three members of the “National Association of Bersaglieri” – a subordinate organization of the Italian Army – intruded the closed headquarters of the organization and dropped the EU flag from the roof. The director of the organization has condemned these actions and stated that they contradict the principles of the Bersaglieri.

The video published by Vamekh Fusdani does not include the date. The examination of the footage found that the event took place in April 2020, where three members of the Bersaglieri intruded the building and removed the EU flag. The incident happened when the headquarters was closed due to the global pandemic so that no one could interfere with the actions of the intruders. Therefore, presenting the actions of three people as the position of the whole Italian army is manipulation.

As one of the local media Ossola News states, three intruders are men aged over 50 and belong to the National Association of Bersaglieri. They visited their organization’s headquarters, which was closed because of the pandemic. After that, one of them climbed to the roof of the building, removed the EU flag and threw it onto the roof. The remaining men took the video, which they later published on social media, commenting that the EU didn’t help Italy enough during the pandemic.

A formal complaint has been filed against the men. In addition, they were also sanctioned for breaking the lockdown restrictions and leaving the household without a proper reason.

The president of the National Association of Bersaglieri, Ottavio Renzi, condemned the actions of the three perpetrators and stressed that their actions contradict the principles of the Bersaglieri.

Facebook profile “Vamekh Fusdani” regularly shares the videos of Ria Novosti, Russia Today and others, which portray the acts of removing, burning and destroying EU flags in different countries. The tendency became prevalent after the violent groups protesting the “Tbilisi Pride” first removed the EU flag on July 5th and later burned it on July 6th. The reason behind this tendency is to show that the negative attitudes towards the EU are predominant not only in Georgia but also worldwide. 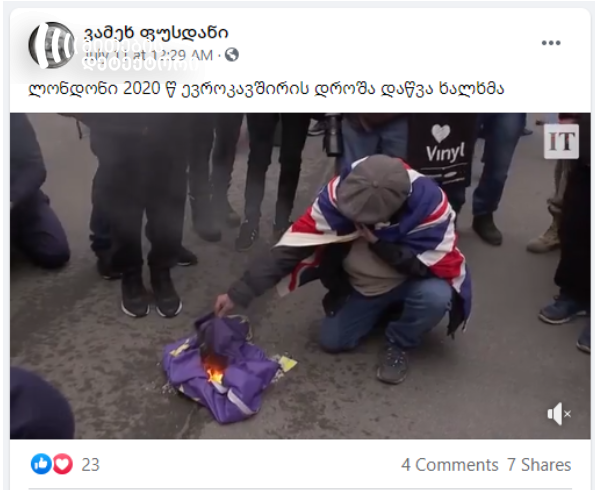 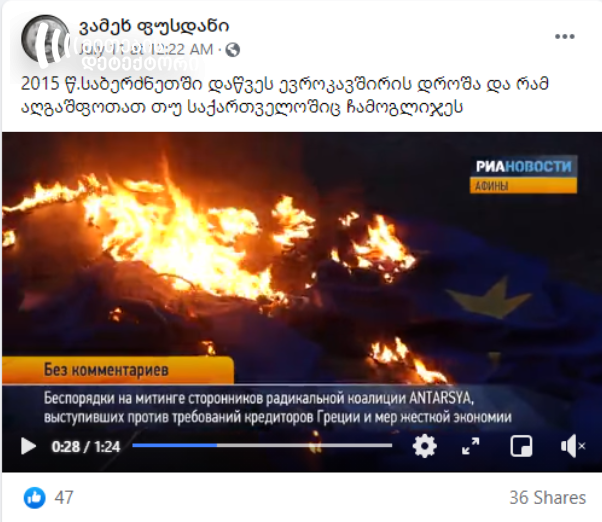 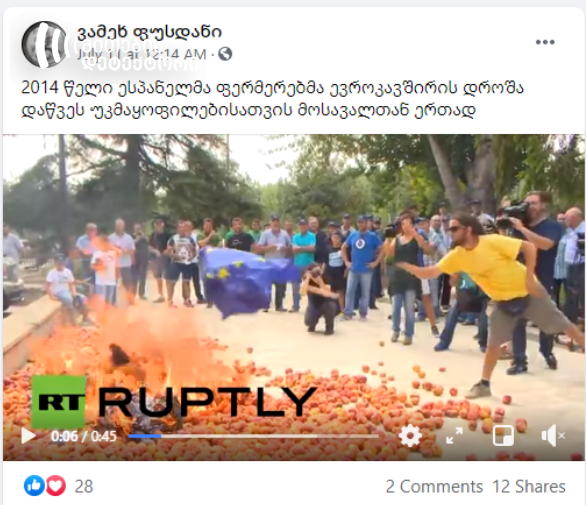 For a similar topic, please see:
Are EU Flags Massively Removed in France and Italy due to Coronavirus?

It is worth mentioning that in his public comments, Vamekh Fusdani justifies the violence against Tbilisi Pride and the journalists, on July 5th, labels the European Union as the organizer of “Tbilisi Pride,” and justifies removal of the EU flag using the same context. 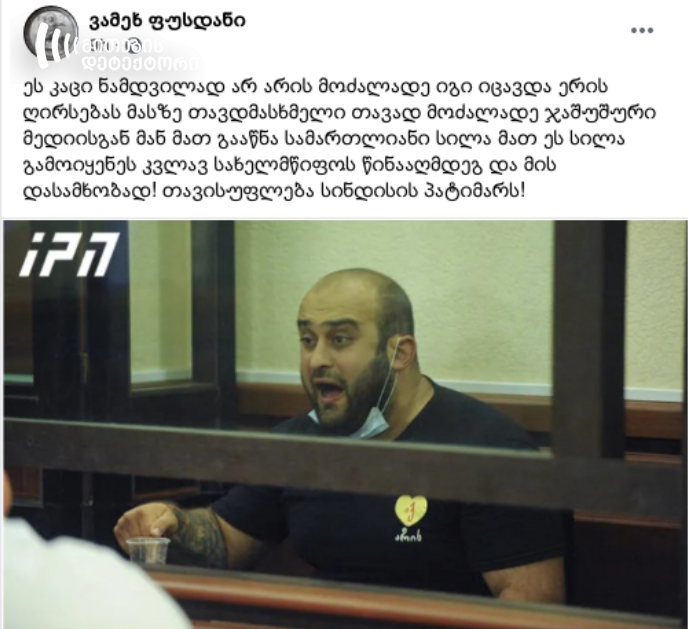 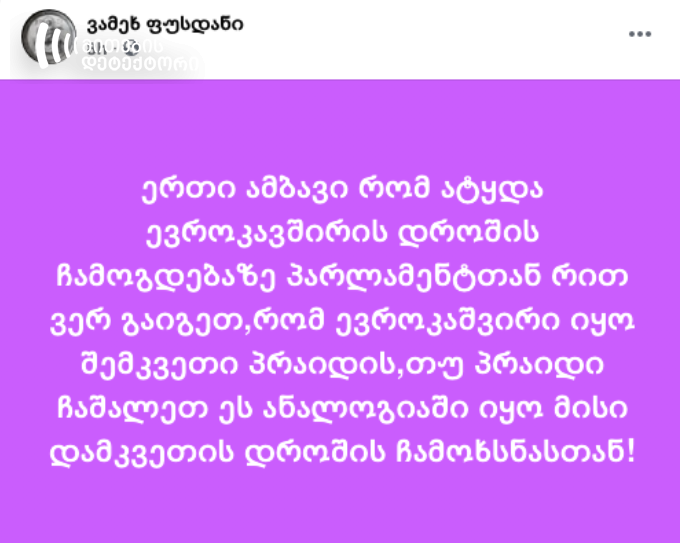 The previous name of the profile Vamekh Fusdani was “Sovereign State,” which can be confirmed by the URL address. 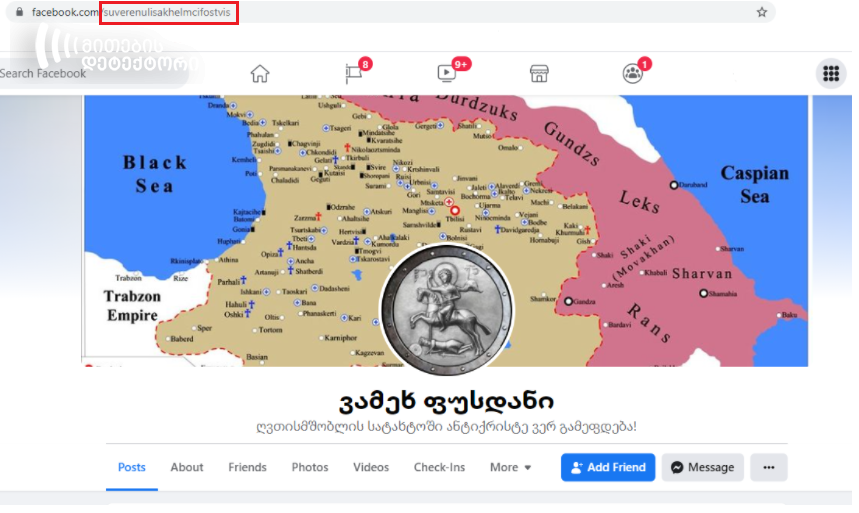 The Myth Detector has previously revealed disinformation spread by this profile:
Topuria and “Sovereign State” Spread Fake News about Facebook
Does CERN Seeks to Open the Gates of Hell and What Role Does Hindu God Shiva Play in Science?