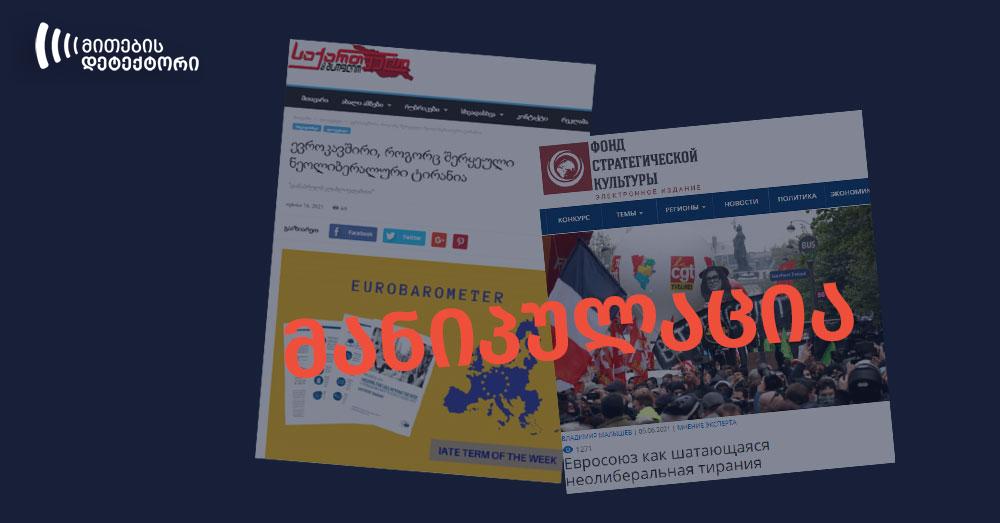 On June 16, Georgia and World, an online media outlet, published an article headlined “The European Union as an undermined neoliberal tyranny.” fondsk.ru is referred to as the source of information. According to the article, the results of recent Eurobarometer surveys confirm that Europeans are not satisfied with the EU actions. To prove negative attitudes towards the European Union, the author of the article claims that 42% of Italian respondents and the majority of the Netherlands population are in favor of leaving the EU; in a referendum held in 2015, the Danish people “voted against further integration into the European Union,” while Sweden may also withdraw from the EU. The article also notes that the European Union failed to adequately respond to the COVID-19 pandemic that led to increased negative attitudes towards the EU. 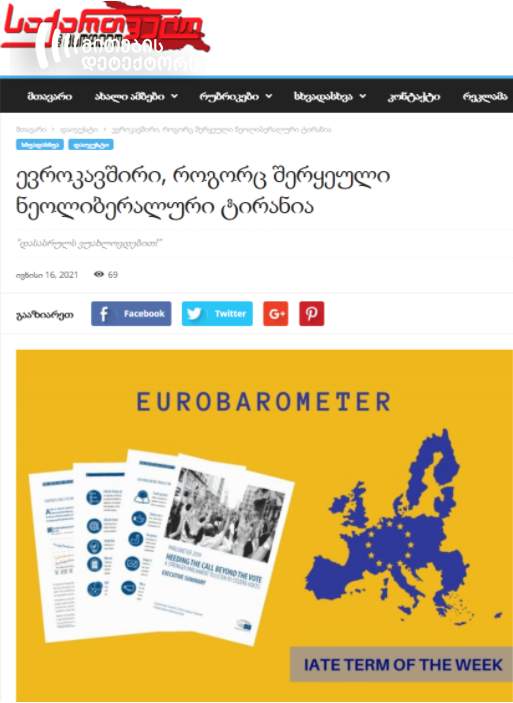 The information spread by Georgia and World as if the member states are not satisfied with the EU actions and some even are in favor of withdrawing from the bloc is manipulative: 1) The 2015 Danish referendum was on more integration into specific spheres rather than withdrawal from or stay in the European Union; 2) The Netherlands and Sweden do not intend to leave the EU; 3) It is true that 42% of Italian respondents were in favor of withdrawal from the EU in 2020; however, the survey was conducted during the first wave of the coronavirus pandemic and a quarter of those supporting the withdrawal stated that they were ready to stay in the bloc if Europe approved concrete measures for Italy. According to the 2021 Eurobarometer survey, 57% of Italian respondents do not agree with the opinion that the country could better face the future outside the EU; 4) According to Eurobarometer survey, the majority of respondents surveyed throughout the 27 member states have a positive image of the EU and are optimistic about the bloc’s future.

The results of Standard Eurobarometer survey commissioned by the European Commission, as well as the European Parliament’s Spring Eurobarometer survey were released in 2021, showing public attitudes towards the COVID-19 pandemic. According to the public opinion polls, although the pandemic had a huge impact on Europe’s daily life, the attitude towards the European Union remains positive. 58% of respondents surveyed throughout the EU believe that health benefits of restrictions were more important than economic damage. 48% of respondents have a positive image of the European Union that is the highest level over the past decade. Simultaneously, European citizens identify health and the economic situation as the two top concerns both at EU and national levels. The survey also indicates an increase in concern about the current state of national economies. 61% of Europeans fear that their countries will recover from the impact of the COVID-19 pandemic “in 2023 or later.”

As for Georgia and World’s claim as if 42% of Italian respondents and the majority of Dutch population are in favor of leaving the EU, it is noteworthy that the 2020 survey conducted in Italy is manipulated, while the information about the Netherlands is fabricated. In case of Italy, according to the survey of 1,000 Italians conducted in April 2020 by Tecné, 42% of respondents said they would leave the EU; however, it is noteworthy that a quarter of that number said they would be prepared to stay in the bloc if Europe approved concrete measures for Italy. The survey was conducted in April 2020, when the epidemiological situation was extremely difficult in Italy and the country’s discontent was largely driven by the EU’s response to the pandemic. It is also worth noting that the results of the 2021 Eurobarometer survey do not enable to say that Italy wants to withdraw from the European Union (see details below).

is unknown what particular source Georgia and World refers to when claiming that the majority of the Netherlands population wants to leave the EU, because no such survey results can be found. Moreover, according to Statista’s March 2020 data, 58% of citizens surveyed in the Netherlands (49% totally disagree and 9% mostly disagree) do not agree with the opinion that a referendum should be held in the country on Netherlands’ leaving the EU.

The article also brings an example of Sweden with the author claiming that Sweden will apparently withdraw from the EU. In fact, according to the 2018 Eurobarometer survey, asked “if a referendum was held tomorrow regarding Sweden’s membership of the EU, how would you vote,” 83% of respondents answered they would vote to remain in the EU, while 10% voted in favor of leaving the bloc.

Georgia and World manipulatively cites an example of the 2015 referendum held in Denmark. The results of the referendum showed that the Danish population did not want to further integrate into EU’s criminal justice and home affairs system – Danish opt-outs from the European Union. Thus, Denmark has a discretion not to consider the EU directives in these particular spheres. The Danish government planned to reject its current opt-outs, but 53% of its population rejected this initiative by the Danish government. The referendum was not related to Denmark’s leaving the EU.

According to the article, the results of the Eurobarometer survey show discontent of the member states towards the European Union. The survey, however, involves several questions regarding public attitudes towards the EU and ultimate results give a positive picture.

Respondents were asked whether they agreed or disagreed with the statement that “our country could better face the future outside the EU”. 66% of respondents disagreed throughout the EU. As for the states mentioned by Georgia and World, the answers look as follows:

(see the table below) 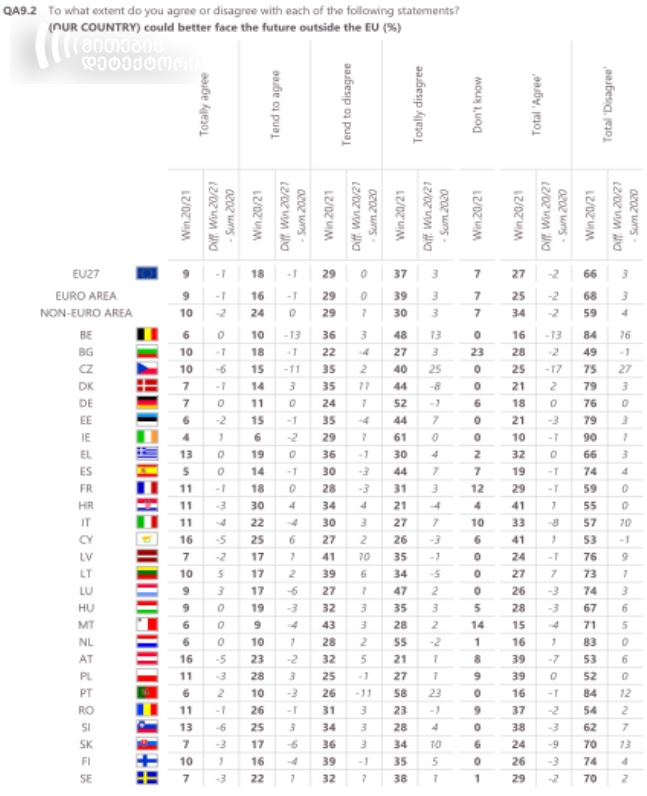 COVID-19 pandemic and respondents’ attitudes towards the European Union

According to the public opinion survey released by Eurobarometer in spring 2021, the majority of respondents surveyed in the 19 EU member states are fairly satisfied than not satisfied with EU actions against COVID-19, believing that health benefits of restrictions were greater than economic damage. The majority of respondents in the remaining eight countries are dissatisfied, noting that economic damage was greater than health benefits. 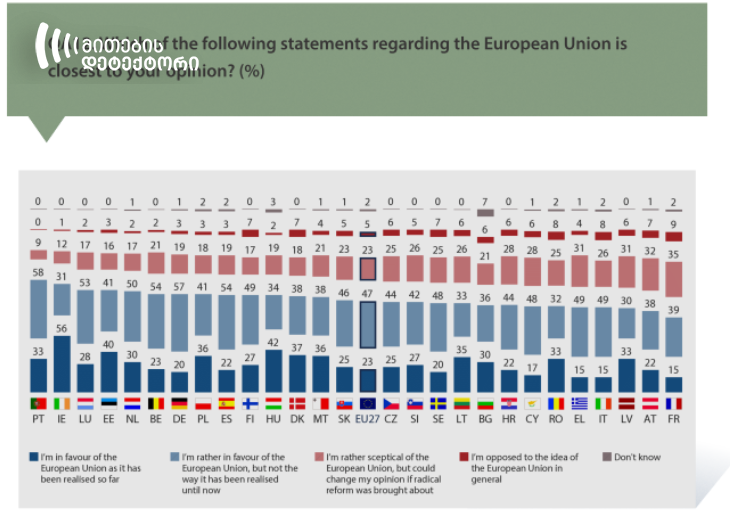 This is not the first time Georgia and World manipulated the results of the Eurobarometer survey and wrongly portrayed the support of France towards the EU. See details in Myth Detector’s article:

Attitudes towards the future of the EU 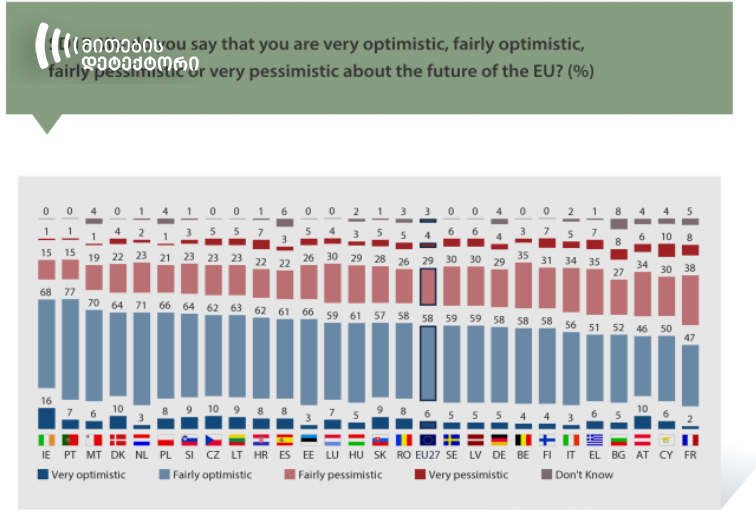 Attitudes towards the EU in member states 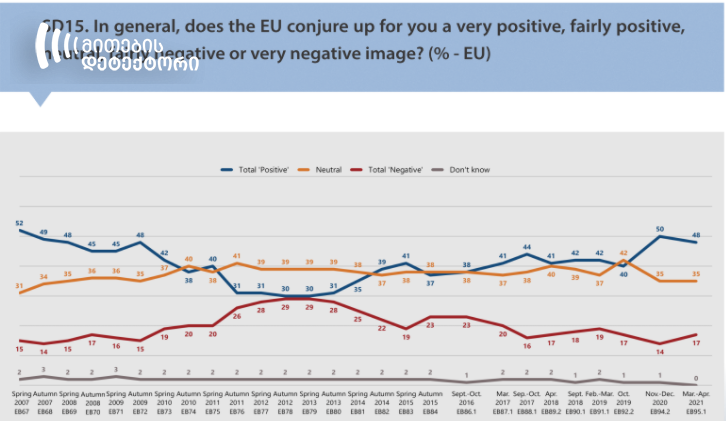 Georgia and World notes in its article that 61% of French respondents have a negative image of the EU. But in fact, 40% of respondents surveyed in France say that they have positive emotions about the EU, and 21% have negative emotions. 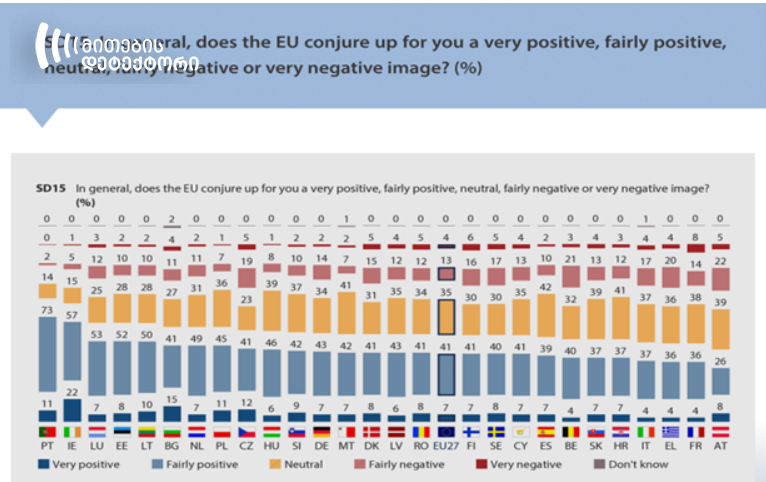 Фонд стратегической культуры (Strategic Culture Foundation) was established on January 11, 2005. Yuri Prokofiev and Vladimir Maksimenko serve as the President and the Director General of the Foundation, respectively. In 1990-1991, Prokofiev was the first secretary of the Soviet Communist Party and a member of the Soviet Politburo. Vladimir Maksimenko works for the Institute of Oriental Studies of the Russian Academy of Sciences and simultaneously serves as analyst for Russian state-owned radio station “Голос России” (Voice of Russia). According to the report released by the U.S. Department of State in 2020, the Strategic Culture Foundation is directed by Russia’s Foreign Intelligence Service and closely affiliated with the Russian Ministry of Foreign Affairs. In April 2021, the U.S. Department of the Treasury imposed sanctions against the Strategic Culture Foundation.