Fight against “Internal Enemy” and Cohabitation with Russian Propaganda 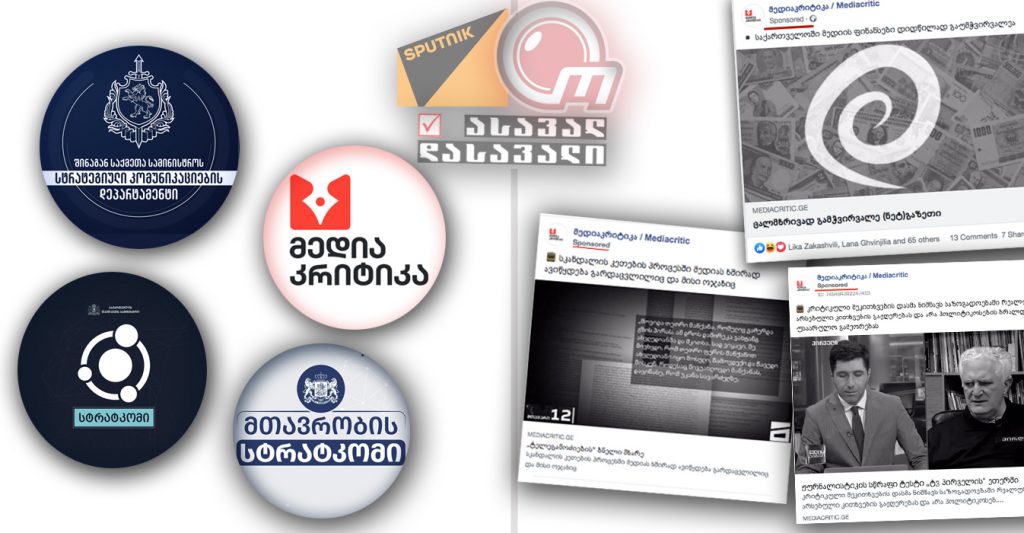 In its policy documents, the Georgian government recognizes Russian propaganda as a threat facing the country. To fight disinformation, strategic communications services are now operating at the Georgian government and various ministries; in addition, a media literacy function has been added to Georgian National Communications Commission (GNCC) to increase the resilience of media users and a web portal Media Critic was launched in 2019 for this purpose.

To clarify how effectively the strategic communications services and the regulator’s communications platforms are fighting against the challenges of disinformation, the Myth Detector analyzed the Facebook pages of 1. Government StratCom; 2. MIA Strategic Communications Department; 3. Defense Ministry StratCom, and 4. GNCC’s Media Critic, as well as their targets and the topics the above mentioned platforms reacted to.

StratComs were most frequently reacting to critically-disposed media outlets with Mtavari Arkhi (10) taking the lead, followed by TV Pirveli (4) and Rustavi 2 (4). Noteworthy that MIA StratCom published its response to the Rustavi 2 TV story on August 5-10, 2019; however, after the TV channel changed hands and almost all of its journalists from newsroom moved to a newly established Mtavari Arkhi, Rustavi 2 TV was no longer referred to as the source of disinformation in the Facebook posts published by MIA StratCom.

Among other targets of criticism were Tabula (1), Formula (1), TV25 (1), timer (1) and in one instance, Russian online edition gazeta.ru, which spread an article following the anti-occupation rallies in Tbilisi, according to which Russian citizens were facing problems in Georgia. 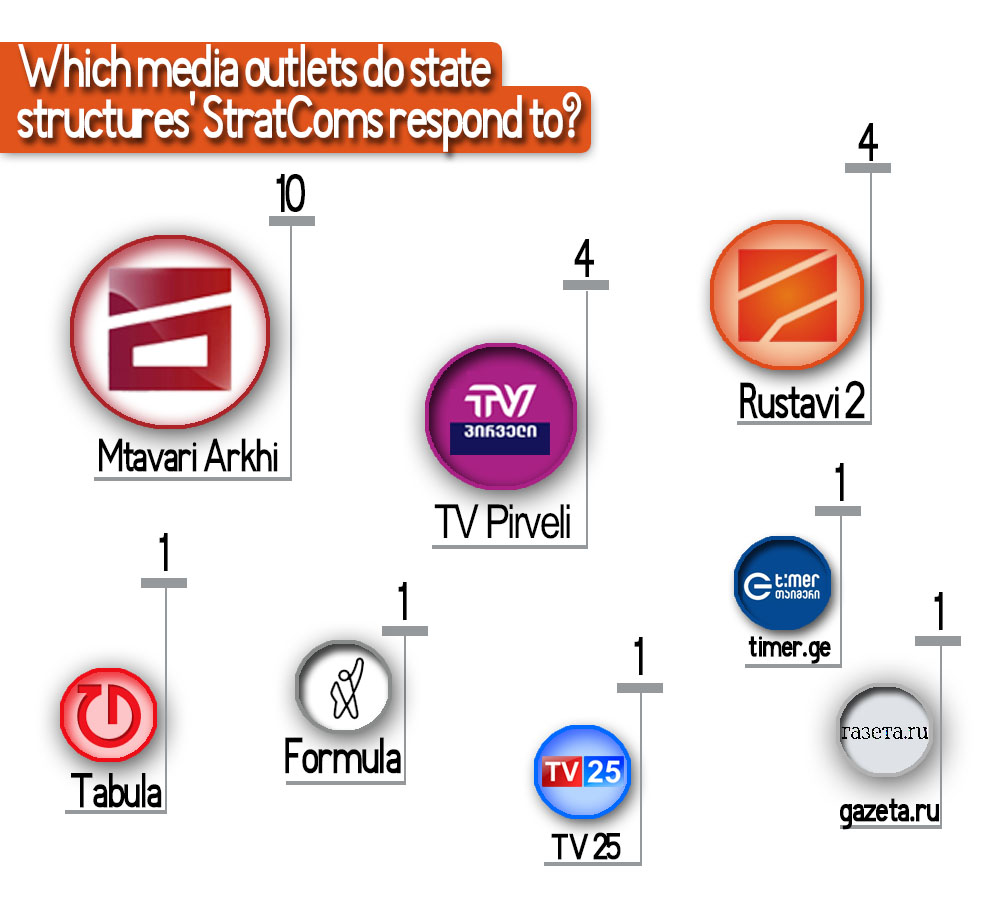 In other instances, the government StratComs reacted to the information spread by movement “Gabede” (2), the United National Movement Party (1), Facebook page “New Force” (1) and a private profile (1). In one instance, the Government StratCom reacted to the accusations voiced by the Russian Foreign Ministry regarding the Lugar Lab.

Of the materials published in a period between 5 November 2019 and 7 July 2020, GNCC’s Media Critic was mainly criticizing the materials published by specific 77 media outlets and pro-opposition media. The monitoring has revealed that mainly the media outlets disloyal to the government were subject to criticism, among them Mtavari Arkhi (39 articles), TV Pirveli (18 articles) and Formula (17 articles). Rustavi 2 TV (11 articles) is also among the targets of criticism. 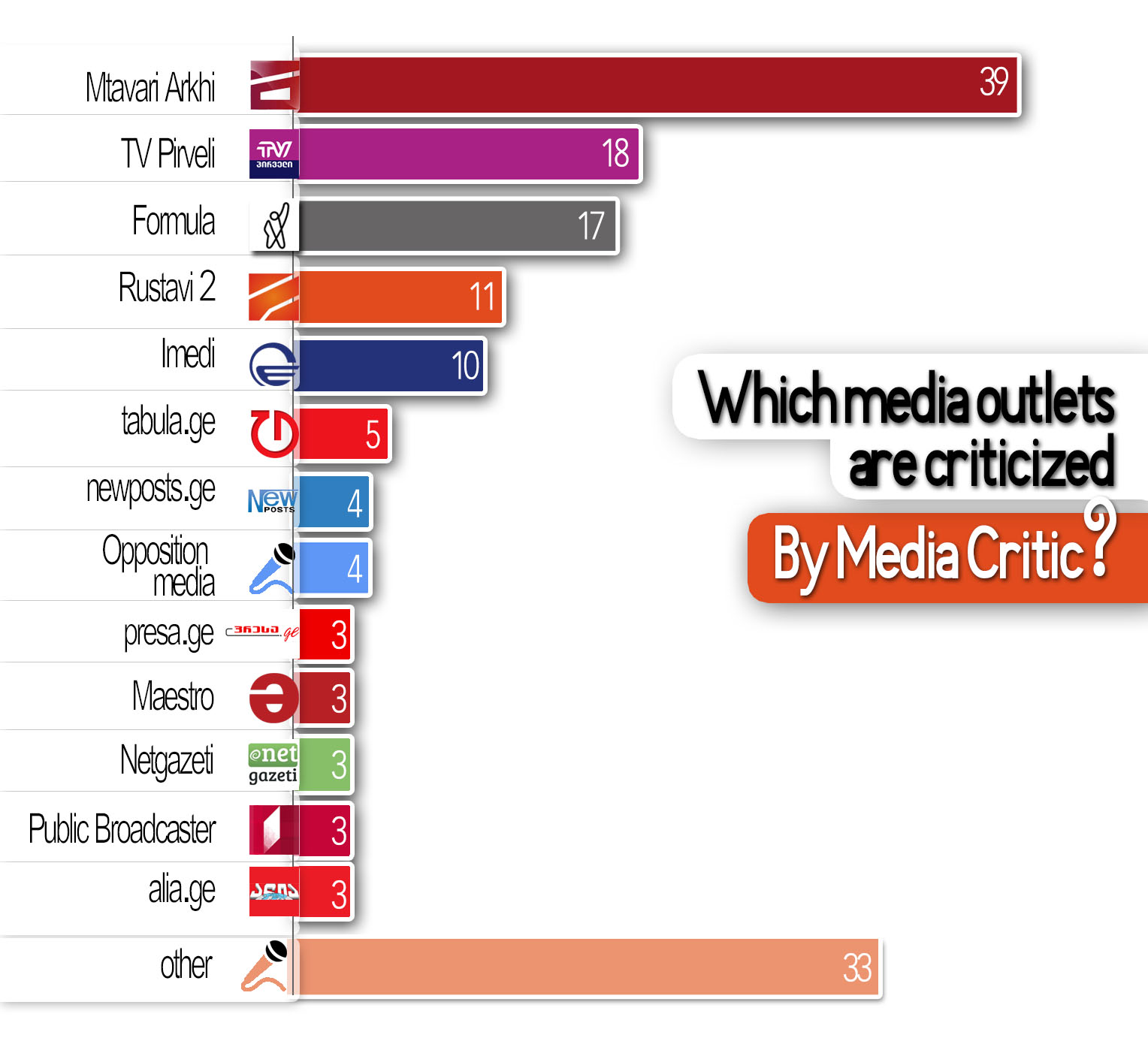 The monitoring has identified 10 instances of voicing criticism against Imedi TV, but the articles were directly targeting Imedi TV only in three instances; in other cases, it was mentioned together with other TV channels. Noteworthy that criticism against Imedi TV has declined recently and the media platform is mainly targeting Mtavari Arkhi, TV Pirveli and Formula.

A pro-Kremlin media outlet News Front Georgia appeared in the focus of Media Critic’s attention only once, together with other online editions, in the article about declaring the state of emergency and shutting down Tbilisi amid the coronavirus pandemic.

The Myth Detector has already mentioned earlier that the posts published by the regulator’s Media Critic regarding the TV channels critical of the government are frequently sponsored. An article against Netgazeti with a manipulative photo and headline (“Unilaterally Transparent (Net)gazeti”) also appeared among the sponsored articles.

Netgazeti also reacted to Media Critic’s article written in response to the open letter sent by Georgian civil society and media organizations to Facebook. The newspaper’s editorial board claims that Media Critic uses the accompanying photo for manipulations and misleading the readers.

“The article is accompanied by a Netgazeti logo for illustrative purposes with a large amount of money depicted in the background. Focusing on transparency in the headline in combination with depicting a large amount of money against a dark background creates a clear example of manipulation and promotes a perception that the article is about Netgazeti’s non-transparent finances. The article, however, does not and cannot say anything about it.” 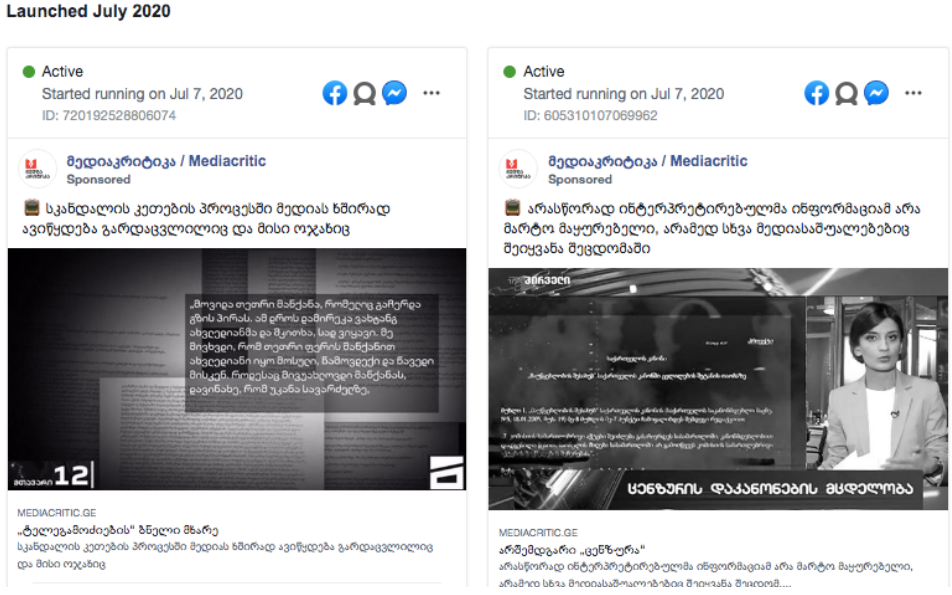 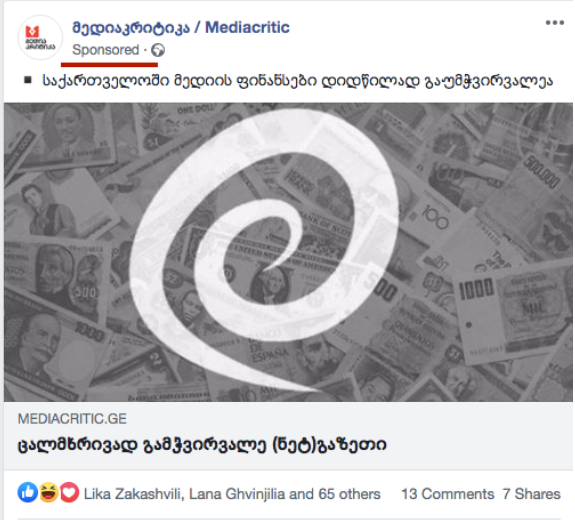 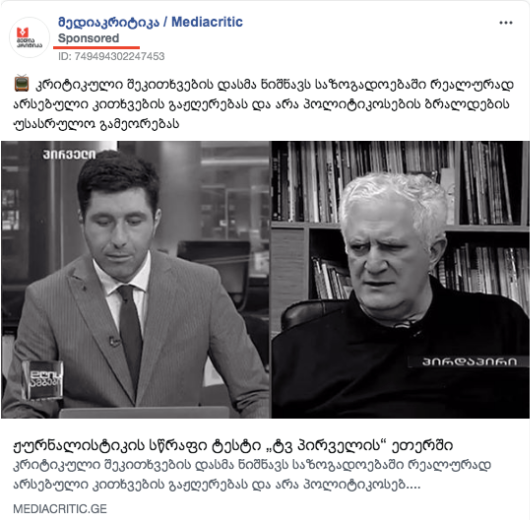 It is worth noting that according to OSCE/ODIHR assessment, Netgazeti was among those media outlets that provided the most balanced coverage of the 2018 presidential elections.

Which media outlets are not criticized by Media Critic?

The regulator’s Media Critic never criticizes media outlets featuring in the reports of local and international organizations for inciting hate speech and anti-Western sentiments as well as spreading disinformation; neither does the Media Critic assess the materials about the government-affiliated Post TV one of whose hosts is the author of the regulator’s media platform.

The monitoring has revealed no articles criticizing the main Georgian sources of Russian disinformation, among them: Media Union Obieqtivi, Sputnik, Asaval-Dasavali, Georgia and World and Sakinform. News Front Georgia, which regularly spreads disinformation related to the Lugar Lab, became the target of the regulator’s criticism, along with other online editions, in connection with the Georgian government’s decision. Disinformation cases originating in these media outlets can be searched on the websites of local fact-checking organizations, as well as at EUvsDisinfo. 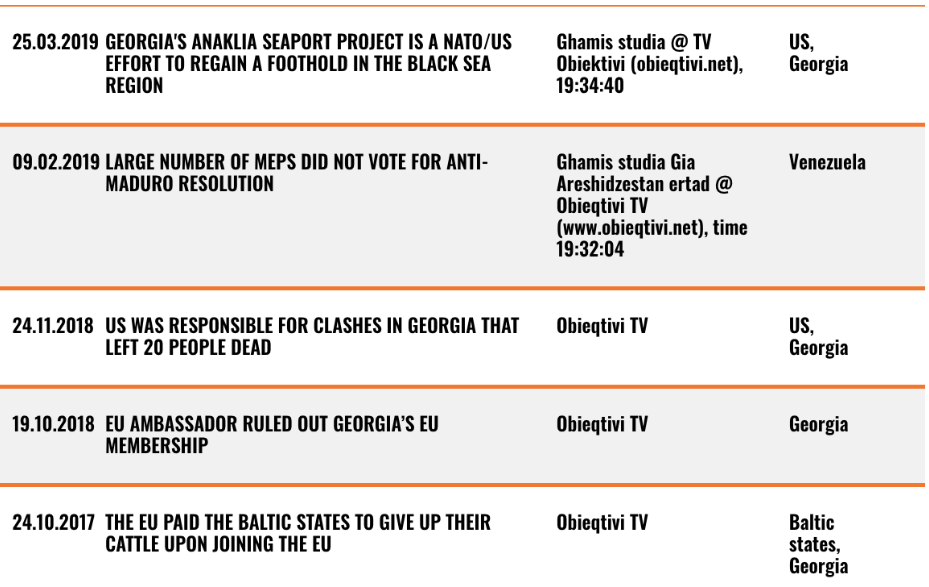 Besides the fact that Media Critic has not published even a single article about Obieqtivi TV – a television channel affiliated with the Alliance of Patriots party, which has been constantly featuring in recent hate speech reports due to its Turkophobic and Homophobic statements – the host of this TV channel and its executive producer, Zviad Avaliani, who said his farewell to viewers on June 5, emerges now as the author of articles published by Media Critic. According to Zviad Avaliani’s Facebook page, he now serves as Head of Department at Media Critic. Noteworthy that just Avaliani is the author of the article against Netgazeti.