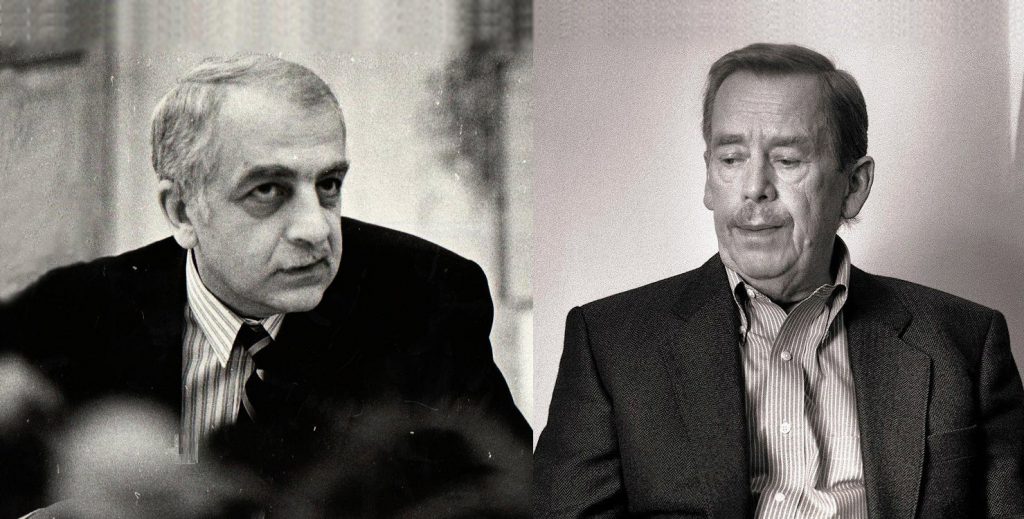 Georgian tabloid Asaval-Dasavali released in its June 26 – July 2 edition an article by journalist Giorgi Gigauri, in which he criticizes the plans to open a monument to President of the Czech Republic, Václav Havel and accuses him of betraying Georgia’s first President, Zviad Gamsakhurdia.

Giorgi Gigauri, Asaval-Dasavali: “Georgia’s legitimate President Zviad Gamsakhurdia, who was exiled from his homeland in 1992 and overthrown in bloody coup, was denied entry by this “humanist” Havel to the Czech Republic… Havel died in his warm bed like a dog, while Zviad Gamsakhurdia was killed by Havel’s patrons for his love towards homeland!”

The reports disseminated by Asaval-Dasavali are not backed up by historical sources, while in his autobiography Zviad Gamsakhurdia speaks about the support expressed by Václav Havel to the Georgian National Movement.

1. The reports as if Havel denied Gamsakhurdia entry to the Czech Republic are not backed up by historical sources.

Asaval-Dasavali’s assertions that in 1992 Václav Havel denied Zviad Gamsakhurdia entry to the Czech Republic lack evidence. The Myth Detector contacted the members of Georgian National Movement, including Gogi Khoshtaria, who served as Georgia’s Foreign Minister in 1990-1991, but none of them confirmed similar moments in the relations between Václav Havel and Zviad Gamsakhurdia. Georgian newspaper Iberia-Spektri, which was loyal to Zviad Gamsakhurdia’s government, also says nothing about such fact.

The available source covering the relations between Havel and Gamsakhurdia is the latter’s autobiography. Georgia’s first President recollects his meeting with Václav Havel in 1990 and speaks about the role Havel played in suspending the criminal case against Gamsakhurdia following the 1989 developments.

Zviad Gamsakhurdia: “The investigation into our “case” was still underway; the prosecutor’s office and KGB oppressed me, forced me to comply with a written undertaking not to leave the country. Václav Havel, who already served as the President of Czechoslovakia then, arrived in Moscow in 1990. He invited me to the meeting at the Czech Embassy to Moscow. When he learnt that the government did not allow me to leave the country [Georgia], he expressed protest at the Soviet Interior Ministry and demanded suspension of the “case” initiated against me in connection with the April 9 developments. The prosecutor’s office suspended the case and I left for Moscow.” On April 9, 1989, Soviet troops attacked peaceful protesters on the Rustaveli Avenue. Following the attack Zviad Gamsakhurdia was arrested as the organizer of protests and an investigation was launched against him. He was banned from leaving the country during the course of the investigation

In his autobiographical memories, Georgia’s first President also recollects the support expressed by Havel to Georgian National Movement and personally to Gamsakhurdia.

Zviad Gamsakhurdia: “I thanked the President [Havel] for saving me from house arrest. He answered that he did it because he had been in the same situation many times and he understands what it means. Václav Havel said that the April 9 developments in Georgia accelerated the destruction of the Empire and helped liberate not only the Soviet peoples, but also Eastern Europe, because the Kremlin did not dare to use force in similar situations anymore.”

3. In 2008 Václav Havel criticized Russia for its military intervention in Georgia.

In the 2008 interview with The Associated Press, Havel criticized Russia for invading Georgia and expressed support to Georgia. He also noted that the August 2008 war was a serious test for the West.

Various sources note the similarities between Zviad Gamsakhurdia and Václav Havel. In his book “Georgia Diary: A Chronicle of War and Political Chaos in the Post-Soviet Caucasus”, Thomas Goltz notes that “Zviad Gamsakhurdia had been celebrated as the next best thing to Andrei Sakharov and Václav Havel.” Gamsakhurdia had once been called the Václav Havel of the Caucasus. The both were involved in national movements against the Soviet Union; just therefore, they were arrested for multiple times. Following the Soviet Union’s collapse, both Havel and Gamsakhurdia were elected as the Presidents of their respective countries.