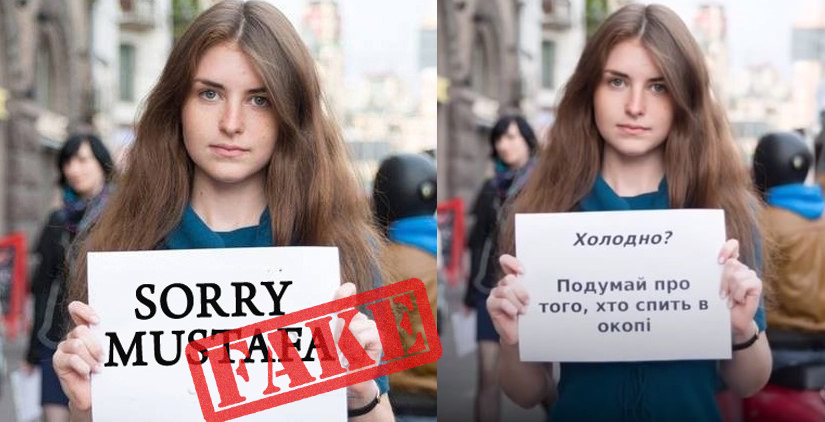 On February 7, 2018, an online edition Georgia and the World released an  article titled “Sorry, Mustafa,” according to which European women launched a flashmob #sorry to apologize to migrants for their depraved behavior. Geworld.ge quotes Brita Borg who, according to the online edition, has organized the flashmob. The article is accompanied by a photo of a woman holding a sign that says “Sorry Mustafa.”

The photo released by Georgia and the World is manipulative, because an original photo depicts a Ukrainian woman holding a sign that says “Cold? Think about those who are sleeping in the trenches” and not “Sorry, Mustafa!” The #sorry flashmob cannot be searched for in social networks. Brita Borg who has reportedly organized the flashmob was a Swedish singer who died in 2010. Stopfake.org also rechecked information about Brita Borg and ascertained that “Google searches reveal nothing about the flashmob or Brita Borg.” 3. The photo was actually taken in 2014 as part of the campaign related to Ukrainian soldiers.

The identity of a woman depicted in the image was verified by TV Rain via findface.ru, a website that lets users search for members of the Russian social networks by uploading a photograph. According to TV Rain, the photo was taken in Ukraine in 2014 and it depicts a Ukrainian woman who participated in awareness-raising campaign aimed at attracting attention to the condition of Ukrainian soldiers. In the original image, a woman is holding a sign that reads “Cold? Think about those who are sleeping in the trenches.” The campaign participants were collecting warm clothes for Ukrainian soldiers. 4. Flashmob #sorry has been invented by Russian media

Information about European women’s #sorry flashmob first appeared in Russian media and social networks in early February, 2018. The fake story containing photo manipulation was posted by a number of Russian news agencies, among them 360tv.ru, Новые Известия, panorama.pub,e-news.su and others. Online edition e-news.su has the following slogan: “Save Donbass People from Kiev Nazi Army.”