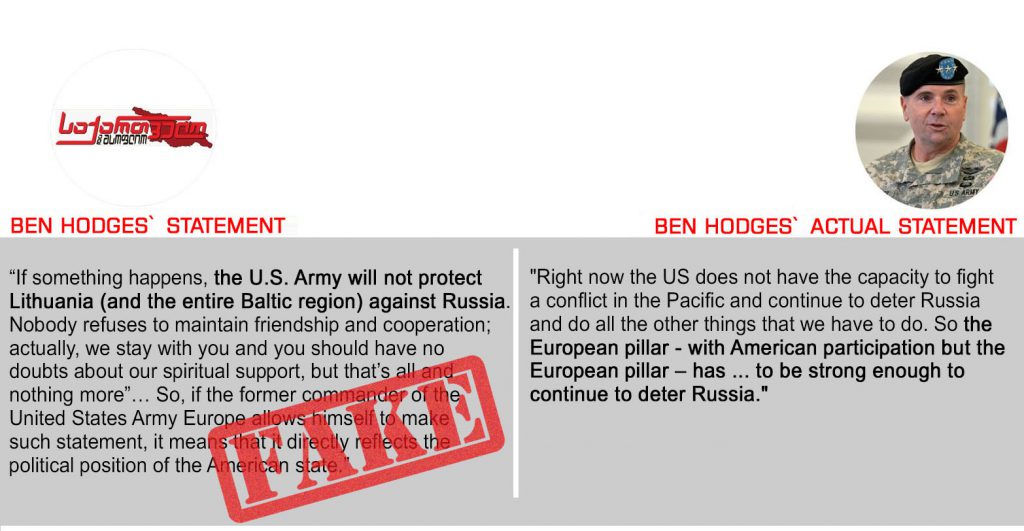 On January 23, 2019, Geworld.ge released an article headlined “NATO General’s Frankness and Fiasco of Baltic Illusions.” According to Geworld.ge, speaking at an informal Snow Meeting in Lithuania, Ben Hodges, former commander of the United States Army Europe, said that the U.S. Army will not protect Lithuania and other Baltic states against Russia’s attacks. Geworld.ge noted in its editorial comment that the opinion voiced by General Ben Hodges reflects the official position of the United States.

Geworld.ge: “General Ben Hodges: If something happens, the U.S. Army will not protect Lithuania (and the entire Baltic region) against Russia. Nobody refuses to maintain friendship and cooperation; actually, we stay with you and you should have no doubts about our spiritual support, but that’s all and nothing more”… So, if the former commander of the United States Army Europe allows himself to make such statement, it means that it directly reflects the political position of the American state.”

The claim as if Ben Hodges noted that the United States will not protect the Baltic countries against Russian aggression is a lie. In fact, Hodges said that right now the U.S. does not have the capacity to fight a conflict in the Pacific and continue to deter Russia, stressing the need for further strengthening of NATO’s European pillar.

On January 10, 2019, Latvian information agency LETA released the comments by Ben Hodges, where he forecasts that the United States will get into a conflict with China within the next 10 years. Against this background, Ben Hodges supposes that “the European pillar – with American participation but the European pillar – has … to be strong enough to continue to deter Russia.” He also noted that Russia seeks to seize full control of the Azov and Black Seas. Geworld.ge changed the content of this statement, which was actually related to the need of NATO’s strengthening, and portrayed it as if the United States will not protect the Baltic states against Russia.

Disinformation about the U.S. General’s remarks in Russian sources

Geworld.ge’s article about the U.S. General’s remarks is identical to disinformation spread by some Russian media outlets.

The disinformation that NATO will not protect the Baltic countries in case of Russia’s aggression has been spread by the following Russian media outlets: ТАСС.РУ, Expert.ru, Rubaltic.ru.

The materials released by Russian-language media outlets and Geworld.ge have almost similar headlines and provide incorrect interpretation of the U.S. General’s remarks.