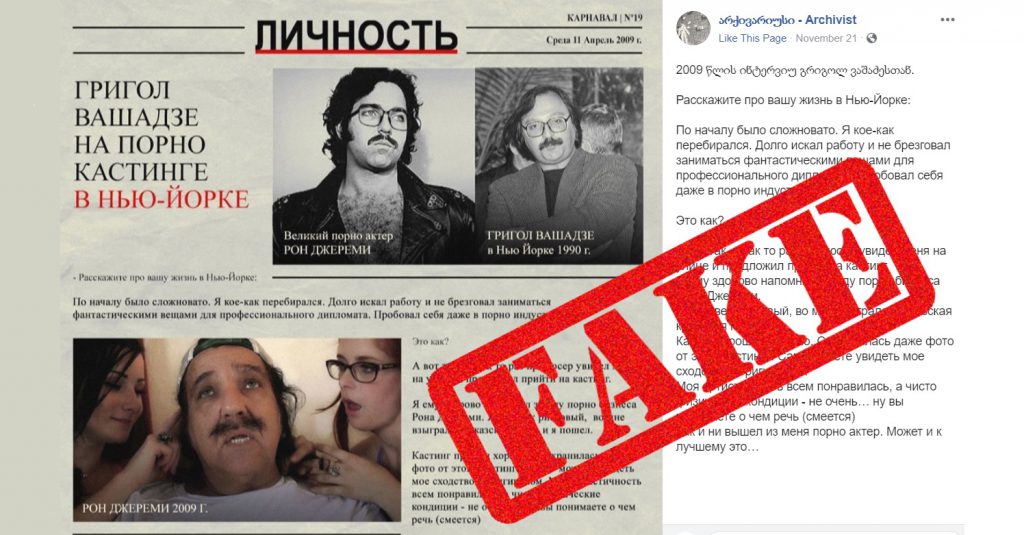 On November 21, 2018, Facebook page “არქივარიუსი – Archivist” published an interview from the 2009 year’s edition of the newspaper Карнавал, where “Archivist” claims that Grigol Vashadze speaks about his personal life and recalls that he was working in the porn-industry in New York. An interview published by Archivist is fake and photos are the manipulation. Such magazine / newspaper as “Карнавал” can’t be found on Internet.

1. Magazine with the similar design and titled as “Карнавал” can’t be found

Magazine / newspaper „Карнавал” with the similar graphic design as depicted on a photo can’t be found on internet. Article titled “Григол Вашадзе на порно индустрии” can’t be found either.

There is the Russian-language literary magazine ” Карнавал ” available online, but without any information about Grigol Vashadze or Ron Jeremy. Moreover, the site was created in 2014, when April 11, 2009 is noted as the date of the fake interview. The first photo portrays Ron Jeremy, but it’s a manipulation. In the original image taken by Avery Willard, Jeremy doesn’t wear glasses, while in the manipulated article he has the glasses similar to Grigol Vashadze, to emphasize physical resemblance between them.

The portrait of Grigol Vashadze included in a fake interview with the caption of “Grigol Vashadze in New York. 1990” is the subject of manipulations too. This photo was taken by the Russian-Ukrainian journalist and photographer Anastasia Fedorenko (Анастасия Федоренко) and portrays Grigol Vashadze with his wife Nino Ananiashvili. According to the photo metadata, the digitalization date of the photo is August 18, 2014.