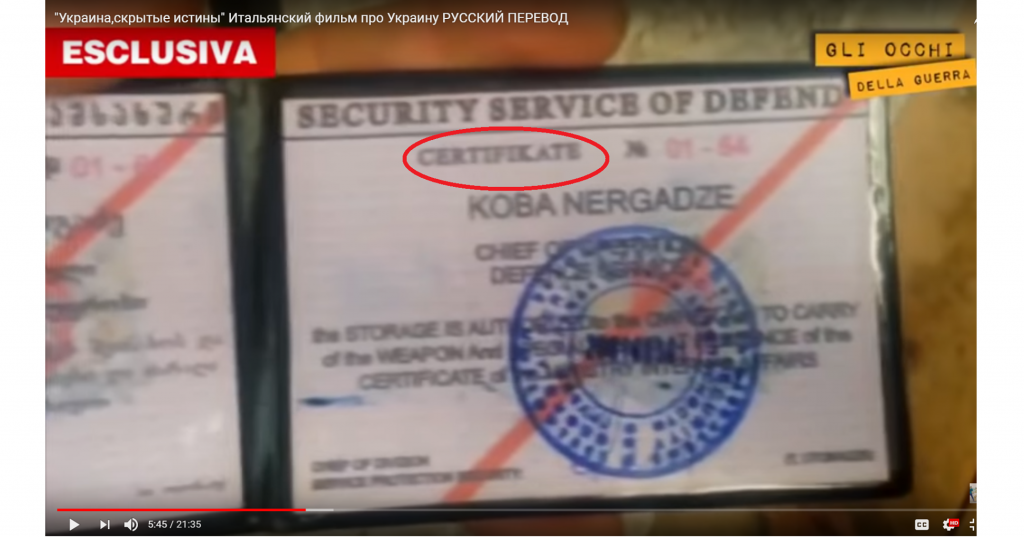 On November 20-21, Russian media outlets disseminated information about an investigative documentary “Ukraine: The Hidden Truth” aired by Italian TV channel Matrix. According to the film, snipers backed by opposition leaders and the European Union, rather than by pro-Russian Ukrainian government forces, opened fire on protesters rallying on the Maidan square of Kiev in February 2014.

The claims that snipers backed by opposition leaders and the European Union, rather than by pro-Russian Ukrainian government forces, opened fire on protesters rallying on the Maidan square in February 2014 are false. The evidence provided in the documentary made by an Italian journalist contains factual inaccuracies and manipulations.

Fake No. 1. Mamuka Mamulashvili was giving instructions to those “snipers”, who arrived in Kiev.

Gian Micalessin, military correspondent of Italian newspaper Il Giornale, is the author of the documentary. He talks with three Georgian respondents – Koba Nergadze, Zalogi Kvaratskhelia and Alexander Revazishvili, who claim that in February 2014, Mikheil Saakashvili’s military aide, Mamuka Mamulashvili paid them USD 1000 each and brought them to Kiev with fake documents for participation in the Maidan developments. The respondents also claim that upon Mamulashvili’s instructions, they opened fire on peaceful protesters.

Myth Detector contacted Mamuka Mamulashvili, leader of the Georgian Legion, who presently resides in Ukraine; he denied all accusations against him, saying that he had not crossed the Ukrainian border before April 2014, whereas the Maidan developments took place in February 2014. Mamulashvili noted that the date of his crossing the Ukrainian border could be verified at the relevant agencies of both Georgia and Ukraine.

Fake No. 2: The Estonian Foreign Minister talks with Catherine Ashton about the snipers hired by the opposition

According to the film, Estonian Foreign Minister Urmas Paet tells EU High Representative for Foreign Affairs and Security Policy, Catherine Ashton the story of snipers shooting the both sides as claimed by Ukrainian doctor, Olga.

According to Ukrainian StopFake, speaking at a news briefing on March 5, 2014, Urmas Paet denied reports as if he told Catherine Ashton that snipers were hired by the Maidan leaders. He also said that media outlets distorted his remarks, because, according to him, he only discussed with Catherine Ashton those versions of Maidan developments, which were disseminated at that moment.

According to analytical portal The Insider Russia, the documentary is fake because the stories told by “snipers” contain inaccuracies and manipulations. Koba Nergadze, one of the respondents, says in the film that he was a security office under Mikheil Saakashvili’s presidency. To prove this, the documentary shows a document in Georgian and English languages containing grammatical errors. The document includes an English wording Security Service of Defend that is incorrect grammatical construction in English. Moreover, the document has a name – Certifikate instead of Certificate. 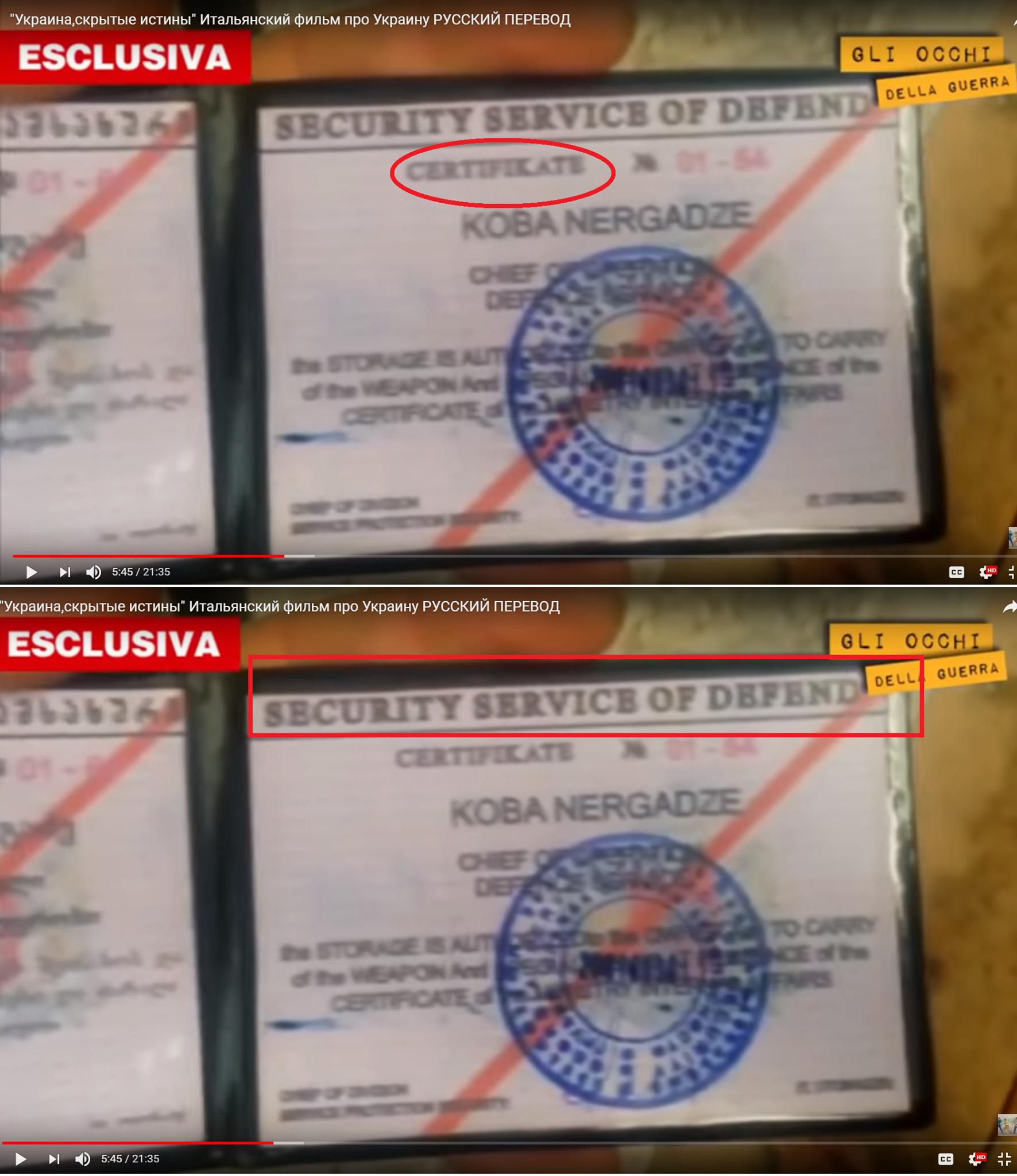 Fake No. 4. Mamuka Mamulashvili speaks with one of the snipers about the need “not to allow” early elections

Koba Nergadze, one of the “snipers,” says that in 2014, during the Maidan developments, one of the opposition leaders, Sergei Pashinski brought him weapons and explained that he would receive further instructions from Mamuka Mamulashvili. Nergadze continues that Mamuka Mamulashvili came to him later and explained that due to the complicated situation, it was necessary to open fire and sow chaos in order not to allow early presidential elections. Not allowing the early presidential elections would mean the maintenance of Yanukovych’s regime. So, it appears that according to Nergadze’s version, Mamuka Mamulashvili and three snipers acted on the Maidan to maintain Yanukovych’s regime, while the story tries to prove the opposite. As it seems, the author missed the discrepancy between Nergadze’s remarks and the film scenario. 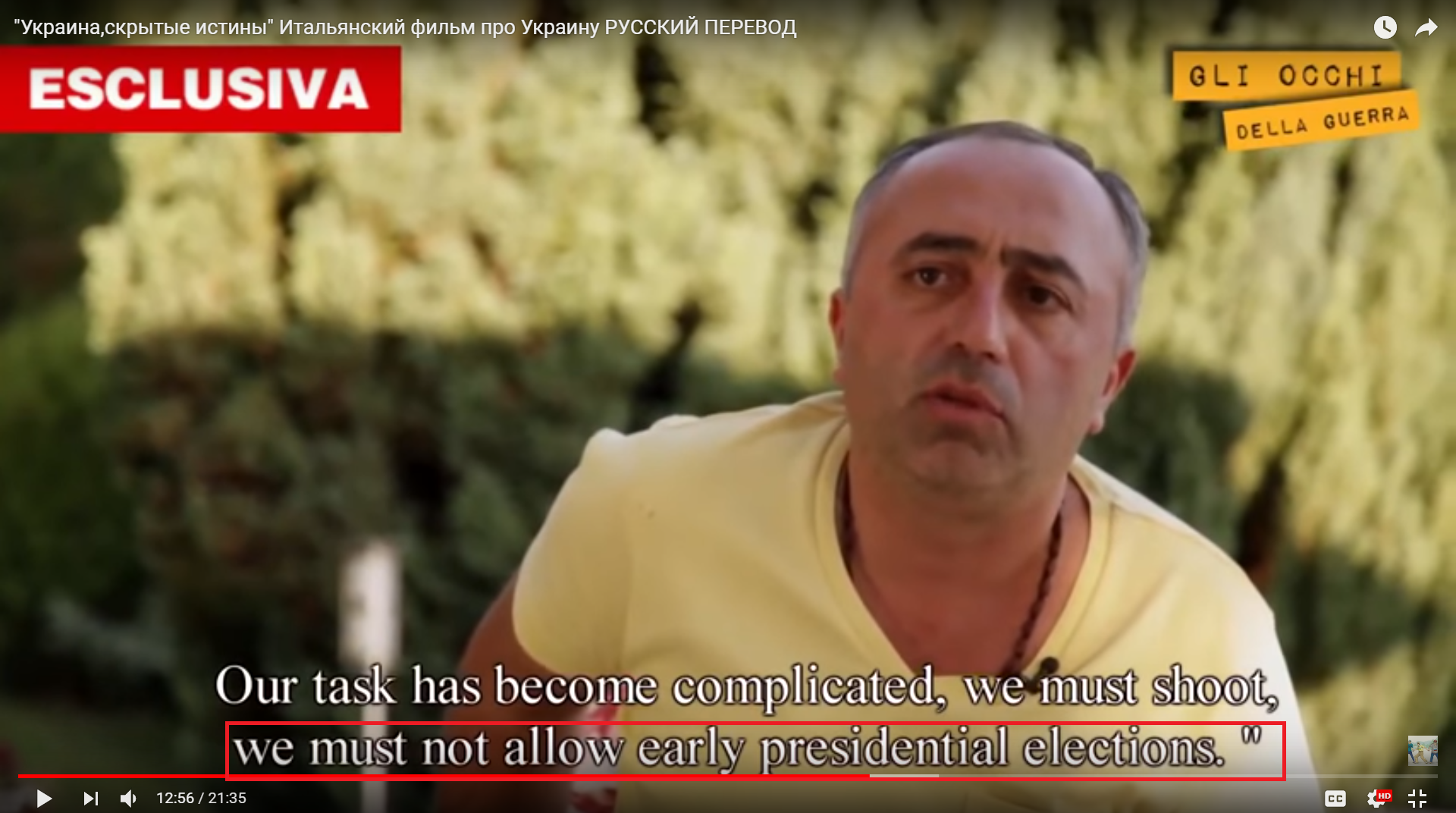 Fake No. 5. Koba Nergadze arrived in Ukraine to stage a revolution upon the instructions of ex-President Mikheil Saakashvili.

Koba Nergadze said that he arrived in Ukraine to stage a revolution similar to the Rose Revolution upon the instructions of Mikheil Saakashvili. He claims that there was no other solution, because it was the presidential order. The Maidan developments started on November 21, 2014, while the clash between protesters and armed police took place in February 2014. Mikheil Saakashvili’s second and final term in office expired on November 17, 2013. Thus, he had no powers to give orders to the subordinates in any government agency, for example the security service, as Koba Nergadze claims.

A documentary “The Findings” was aired on November 20-21 by Russian NTV TV, Channel One of the Russian state-owned TV, Zvezda TV of the Russian Defense Ministry and Царьград TV, as well as by media outlets РИА Новости Украина, Sputnik Эстония, and Regnum.ru.

Disinformation about the Maidan snipers is a narrative spread by Russian propaganda.

About Matrix TV and Gian Micalessin

The articles by Gian Micalessin, the author of the documentary “Ukraine: The Hidden Truth,” are posted on the following websites: Русская весна, inopressa.ru. In the 1970s, Gian Micalessin was a member of Italian far-right group Trieste Youth Front.

This article initially included the sentence  “Early presidential elections would mean the maintenance of Yanukovych’s regime.” ,which was a translation error. Due to our reader’s feedback, the error was corrected. Myth Detector is thankful for its readers for their interest and feedback.