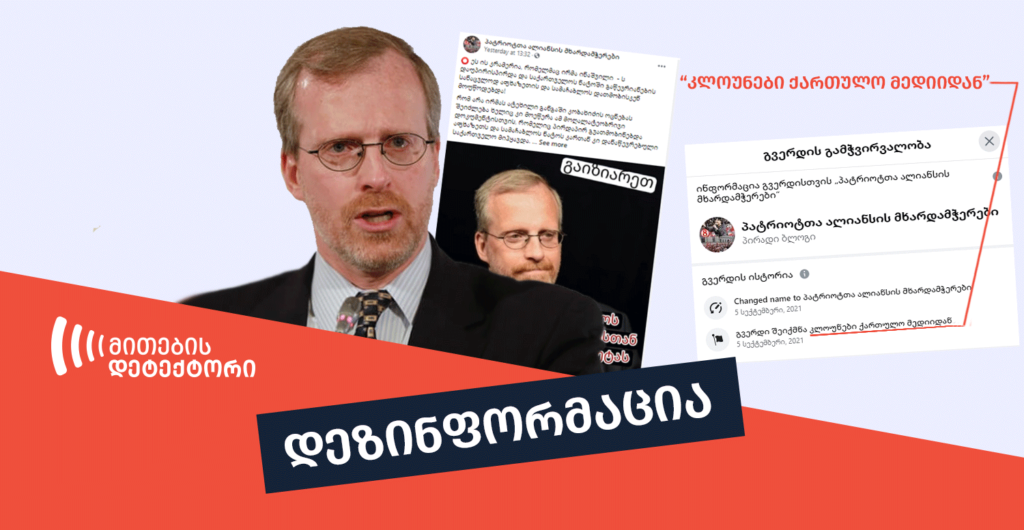 On September 5th, the Facebook page “Supporters of the Alliance of Patriots” published a post about David Kramer – the researcher at Florida International University and the former official of the US Department of State. The post claims that Kramer, who encouraged Georgia to join NATO in exchange for losing the occupied territories, demanded the Georgian government to cease diplomatic relations with Belarus. The post proclaimed that the statement of Kramer represents a blatant breach of Georgian sovereignty and interferes with the internal affairs of the country. 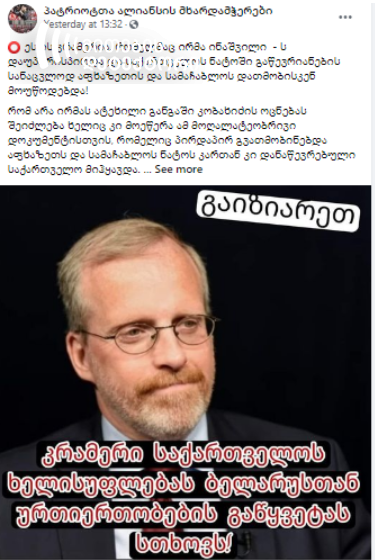 The accusation of “The Supporters of the Alliance of Patriots,” as if Kramer asked the Georgian government to cease relations with Belarus, is disinformation. In reality, David Kramer and Ian Kelly, the former US ambassador to Georgia, have made a joint statement regarding the newly-signed agreement between the Georgian State Security Service and the Belorussian КГБ and criticized the Georgian government for cooperating with a violent regime. The claim that Kramer encouraged Georgia to join NATO in exchange for losing the occupied territories is also false.

On August 1st, 2021, the agreement signed between the State Security Service of Georgia (SSG) and the KGB of Belarus on August 25, 2016, came into force. The agreement defines the forms of cooperation between the State Security Committee of Belarus and the SSG, including the exchange of information, the issuance of personal data, holding of joint events, etc. Following the release of the report, the Georgian government was criticized by the opposition, human rights activists and Western politicians for cooperating with the KGB in Belarus, as Belarus carries out political persecution of Lukashenko’s opponents and activists, and the agreement potentially threatens the Belarussian political asylum-seekers in Georgia with potential persecution. At the same time, as Lukashenka himself stated, he works closely with the Russian Security Service (ФСБ). 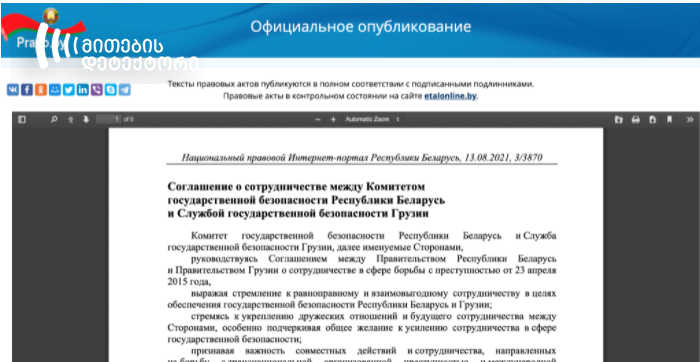 Following the issue, on August 20th, 2021, the American expert David Kramer and the former US ambassador to Georgia, Ian Kelly, have published a joint letter on Foreign Policy, which criticized the Georgian government for taking decisions damaging the democracy and Euro-Atlantic aspirations of the country, especially the abrogation of the ‘Charles Michel agreement’ and enforcing a deal with the Belorussian KGB. The letter also called upon Washington to impose specific sanctions if necessary:

Neither the aforementioned letter nor any other public statements issued by Kramer state that Georgia should terminate all types of relations with Belarus.

Relations between the government of Alexander Lukashenko and the Western world have been strained since the aftermath of the disputed August 2020 presidential elections. Over the past year, the United States, Canada, the United Kingdom, and the European Union have imposed personal sanctions on Belarus, Lukashenko, and government officials over election fraud, violence against opposition figures, activists, and peaceful demonstrators.

Disinformation as if Georgia will have to renounce its Russian-occupied territories in exchange for NATO membership has been disseminated by the pro-Kremlin media and actors for years. Nonetheless, a similar claim has never been voiced by Georgia’s Western partners and friends, including David Kramer. In fact, these specific manipulations are related to one of Georgia’s NATO membership strategy models, which implies Georgia’s entry into the North-Atlantic Alliance on the condition of non-invocation of Article 5 of the NATO Charter on the occupied territories. David Kramer has indeed made statements about Georgia’s integration into NATO through this model, but this does not mean that he calls on Georgia to cede Abkhazia and Samachablo in exchange for NATO membership.

Article 5 of NATO Charter concerns collective defence, meaning that “an armed attack against one or more of them in Europe or North America shall be considered an attack against them all and consequently they agree that, if such an armed attack occurs, each of them, in the exercise of the right of individual or collective self-defence will assist the Party or Parties so attacked by taking forthwith, individually and in concert with the other Parties, such action as it deems necessary, including the use of armed force, to restore and maintain the security of the North Atlantic area.” In case of rapid accession of Georgia into NATO, Article 5 of the NATO Charter may initially apply only to territories controlled by the Government of Georgia and include the occupied territories only after the restoration of the Georgian jurisdiction.

Manipulations regarding Article 5 of the NATO Charter have been addressed by “Myth Detector” previously as well. For more details, see the articles:

About “The Supporters of the Alliance of Patriots”

The Facebook page “The Supporters of the Alliance of Patriots” was created on September 5th, 2021. The page was initially named “Clowns from the Georgian Media,” however, the page changed the name the same day it was created. 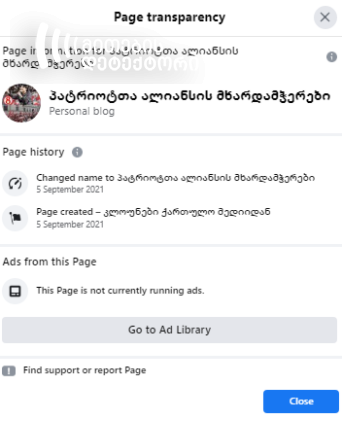 Within two days since its creation, the page published ten posts supporting Irma Inashvili and the Alliance of Patriots. The Facebook page predominantly shares statements of Irma Inashvili regarding the resumption of direct dialogue between Georgia and Russia. 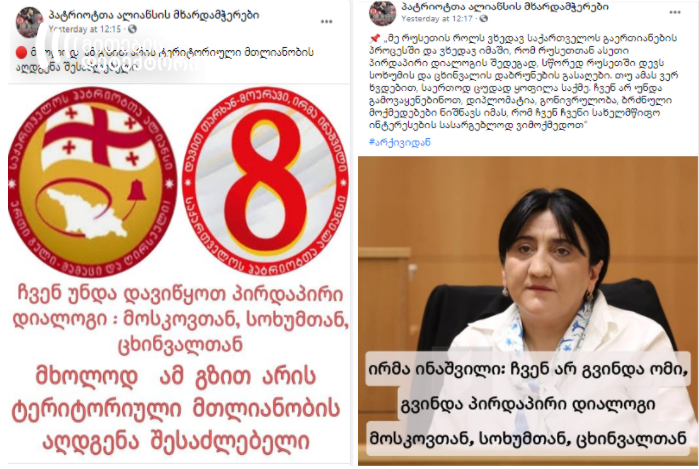 Irma Inashvili, the leader of the pro-Kremlin “Alliance of Patriots of Georgia” (AoP), challenged David Kramer for the first time in September 2019 at the Fifth International Conference organized by the Center for Economic Policy Research and the McCain Institute. On September 10th, 2019, Irma Inashvili decided to enter the conference venue with the camera crew of ‘Obieqtivi’ without registration and asked to make a statement. The moderator of the conference, David Kramer, asked Inashvili to leave the building, after which a verbal confrontation took place between Kramer and the leader of the Patriots Alliance.

On September 11th, 2019, Irma Inashvili proclaimed that the AoP was preparing the so-called “Kramer List” to be submitted to the Georgian Parliament, which would ban the affiliates of Saakashvili and Bokeria from entering the territory of Georgia. On September 13th, the AoP sued David Kramer and the US diplomat Matthew Bryza at the prosecutor’s office for “insulting their honour and dignity.” On September 15th, the AoP held a demonstration in front of the US embassy in Tbilisi, condemning the actions of Kramer and Bryza at the Tbilisi International Conference.