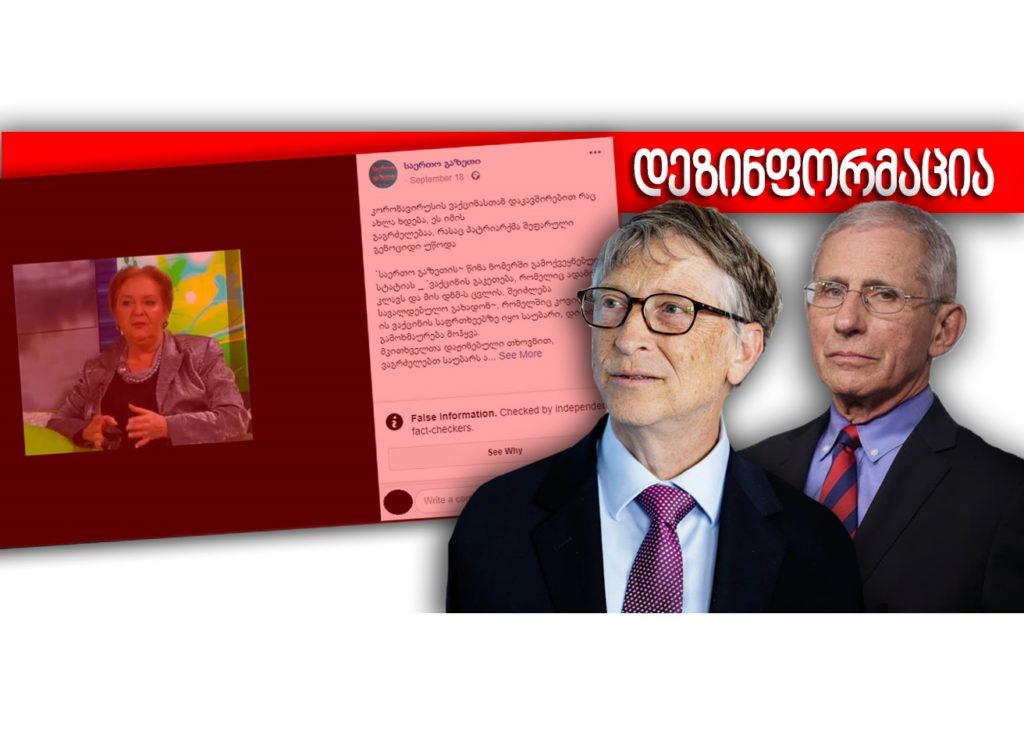 On September 18, Facebook page “საერთო გაზეთი” (Common Newspaper), which also has a print version, published an interview with Tina Topuria, a homeopath, where she talks about the COVID-19 pandemic and vaccination. Tina Topuria mentions vaccine manufacturers, Bill Gates, UNICEF, and Gavi, the Vaccine Alliance, claiming that all of them are driven by business interests, supplying untested and dangerous vaccines to various countries.

As of 10am, September 25, the post has over 1,000 shares. Part of the interview with Tina Topuria was also shared on საერთო გაზეთი’s Facebook page on September 10. 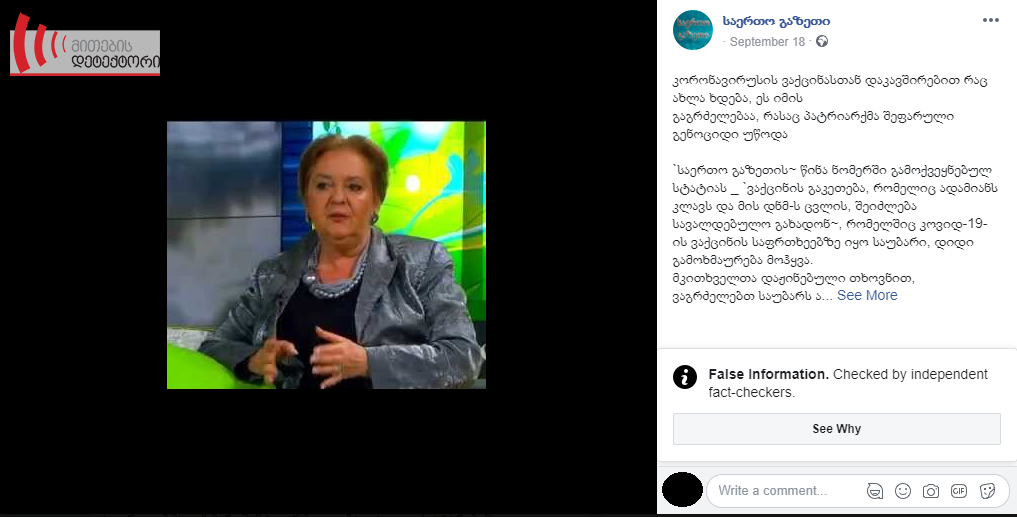 Tina Topuria mainly repeats her earlier disinformation statements made on Obieqtivi TV for multiple times. Myth Detector offers you the disinformation revealed in Topuria’s interview with საერთო გაზეთი, as well as her messages voiced without any evidence.

Lie N1: Vaccine is dangerous, because it has been created through genetic modification.

A number of candidate vaccines for COVID-19 use a genetic modification of the virus. It’s a relatively new process that scientists say may be safer and cheaper than conventional vaccines, since it significantly speeds up the process of vaccine development; it is less expensive and vaccines created through this method can easily be stored in warm climates, even at room temperature, whereas traditional vaccines require refrigeration. It is important to test vaccine safety through relevant research and there is no problem in creating a vaccine through genetic modification.

Animal testing is one of the phases defined by the World Health Organization (WHO) to approve the vaccine. Speaking at a news briefing in the White House in March 2020, Anthony Fauci, the director of the U.S. National Institute of Allergy and Infectious Diseases, said that animal testing is the best way to make sure that the vaccine is safe. He also noted that vaccine safety does not mean only absence of side effects, but it is necessary to test whether a specific vaccine enhances the infection. “You can get a good feel for that in animal models,” Dr. Fauci added.

Vaccine testing accordingly follows the international guidelines of clinical testing, a three phase process. Only Russia and China have approved vaccines without waiting for the results of Phase 3 trials. Researchers are testing 42 vaccines in clinical trials on humans, and at least 93 preclinical vaccines are under active investigation in animals.

Lie N3: Georgia is among the developing countries and vaccination is supervised by Gavi, where USD 8.8 million has been raised, but they still make us pay money

The Gavi Board approved 92 low- and middle-income countries and economies, which will be able to access vaccines through the COVAX Advance Market Commitment (AMC), which will also cover at least part of the cost. Georgia, however, is not on the list. The list of 92 AMC-eligible economies includes all economies with Gross National Income (GNI) per capitaunder US$ 4,000. Georgia’s GNI is slightly more – US$ 4,740. Besides these 92 countries, other 80 potentially self-financing countries also expressed interest in the Gavi COVAX. Amiran Gamkrelidze, director of the Georgian National Center for Disease Control and Public Health, said that Georgia sent an official application to Gavi regarding the purchase of about 700,000 vaccines.

The vaccine is undergoing clinical trials involving human volunteers. And any claims that the vaccine is being tested in the developing, “second-rate” countries, are far from reality. For example, the vaccine developed by British-Swedish pharmaceutical company AstraZeneca is now undergoing clinical trials in South Africa, India, Brazil, the United States and Great Britain. Further, a web portal 1daysooner.org has been created to serve as a hub between scientists and volunteers. It is made up of more than 37,200 volunteers from 162 countries.

Lie N5: Bill Gates makes no secret that he has created a vaccine that will genetically modify humans

Bill Gates has not said anything like this. In fact, the vaccine has been created through genetic modification. This means that, in contrast to the more widespread “conventional” vaccines which use a whole pathogen or fragment, a DNA vaccine involves the injection of a small part of the virus’s genetic code (DNA or RNA) to stimulate immune response in a patient without an infection. This procedure and, generally, vaccines cannot cause genetic modification in humans. It is a myth frequently spread by anti-vaxxers.

Lie N6: Under Juvenile Law, a child may be separated from parents if the latter refuse vaccines

Various actors are frequently speculating with juvenile justice. In fact, the main goal of juvenile justice is to focus more on rehabilitation than punishment when crimes are committed by minors. Such system aims at taking minor offenders’ interests into account and developing an individual approach towards them. As for the issue of seizing a child from parents, it is linked to the Code on the Rights of the Child and a social worker. However, separation of a child from a family is an extreme measure and it may take place when a child is a victim of violence and when a warning or less strict measures yield no results.

A parent has the right to refuse vaccines and such decision does not lead to separation of a child from a family.

Lie N7: The more antibodies in human body, the higher probability of negative consequences among people infected with COVID-19. Mass seasonal flu vaccination was carried out in Italy and Spain, where elderly people are at higher risk for complications.

Scientists do not prove that antibodies developed from the regular flu vaccine have any negative effects on people who are infected with COVID-19. As for the cases of Italy and Spain, it is not true that mass vaccination was carried out there and elderly people are at higher risk for complications. In fact, the following three vaccines are recommended for the population aged 65+ in Italy and Spain: the flu vaccine, pneumococcal vaccine and tetanus-diptheria-pertussis vaccine (Tdap). The government simply calls on the population to get these vaccines and their involvement in the program is not mandatory. According to the statistical data for 2019-2020, vaccination of the elderly over 65 has reached 54.6%and 54.3% in Italy and Spain, respectively.

It is also a lie that the elderly are most vulnerable to seasonal flu vaccines. On the contrary, vaccines are the best defenses against many serious infectious diseases. According to the information published by the World Health Organization in 2008, elderly individuals given influenza vaccine in the USA had approximately 20% less chance of suffering cardiovascular and cerebrovascular disease and 50% lower risk of mortality from all causes compared to their unvaccinated counterparts. Myth Detector has already verified Tina Topuria’s disinformation on this issue in its earlier article.

Lie N8: Bill Gates and Anthony Fauci will never agree on loss instead of profit. According to the plan developed by Bill Gates, 7 billion people should definitely be vaccinated

The claim that Bill Gates and Anthony Fauci expect serious profits from vaccines is a conspiracy theory that had been spread earlier too. In addition, Bill Gates’ plan that 7 billion people should definitely be vaccinated does not exist at all. He actually said that it is “urgent” to create the vaccine and it will require “an incredible collaboration” to make it available to 7 billion people.

Manipulation N1: Taking some medicines and vitamins during pregnancy increases autism risks in an unborn child

Such claims have no evidence, because Topuria does not name specific medicines or vitamins prescribed for pregnant women. Although some studies found that taking certain medicines, for example antidepressants during pregnancy increases the risk of children developing autism, there is not enough evidence to link them with each other. Moreover, Topuria discusses the issue in the context of vaccination that is manipulative. The facts about vaccination not causing autism have been gathered and confirmed for multiple times.

Manipulation N2: Complications during the first phase trials conducted by AstraZeneca were not considered serious, whereas the trials following the third phase complications were resumed after the company’s requirement for being exempt from liability was met

Topuria’s remarks related to the pharmaceutical company AstraZeneca are a half-truth; however, the context has been changed. The company said in July 2020 that it could not assume responsibility if in several years the vaccine shows side effects. AstraZeneca also said that for most countries it is acceptable to take that risk on their shoulders. However the decision to resume third phase trials is not linked to this statement: on September 6, the company placed clinical trials on hold after one volunteer developed a neurological illness. Clinical trials have resumed following confirmation by the UK Medicines Health Regulatory Authority (MHRA) that it was safe to do so. AstraZeneca coronavirus vaccine trial remains on hold in the U.S.

AstraZeneca’s Phase 3 Covid-19 vaccine trials were carried out successfully and only two cases of complications were reported. One of them took place in July and the trials were put on hold back then. The investigation, however, established that the patient experienced neurological symptoms consistent with a rare but serious spinal inflammatory disorder and it had nothing to do with Covid-19 vaccine.

Facebook page “საერთო გაზეთი” was created on July 30, 2011. The page notes that the newspaper is released on Wednesdays. Presently, their website does not operate.

According to the old website, the newspaper has been released since March 2008 and Vakhtang Kharchilava serves as its editor.