Shortly before the October 2nd local elections, Myth Detector identified 13 Facebook accounts with 11 posing as regional media outlets, one – as a page aimed to popularize a specific region and another – operating as a public and cultural page. The pages posing as regional media indicate in their descriptions that they are media outlets; however, they are mainly supportive of a specific political party or a separate politician. Four of them (Samegrelo Times • სამეგრელო თაიმს, იმერეთის ხმა • Voice Of Imereti, რუსთავი•news and Info Imereti) were created several months or weeks before the elections. Some pages are discrediting various political forces instead of supporting them.

The following Facebook accounts are involved in the campaign:

Facebook page თიანეთის მაცნე [Tianeti Herald] indicating ‘journalist’ in its description was created on December 3rd, 2017, and was initially named Shramaz Ertkhmosana. The page first changed its name on December 26th, 2017, taking the name ‘Supporters of Tamaz Mechiauri,’ and then turned into ‘Tianeti Herald’ on January 4th, 2018.

Tamaz Mechiauri was an MP in 2012-2016 from the ruling Georgian Dream party. He quit the party in 2016 due to incongruence and established a party ‘For United Georgia.’ At that time, when the page was operating in the name of Tamaz Mechiauri (2017-2018), the latter served as the Mayor of Tianeti Municipality (2017-2020). In 2018-2020, the page published a number of posts discrediting Tamaz Mechiauri.

The page has sponsored two posts with one related to the arrival of the Minister of Culture in Tianeti to attend a ceremony of opening the Culture House, accompanied with the tags supporting Levan Tsiklauri and Georgian Dream, and the other expressing support, on the one hand, to the ruling party candidate, and targeting opponents, on the other. 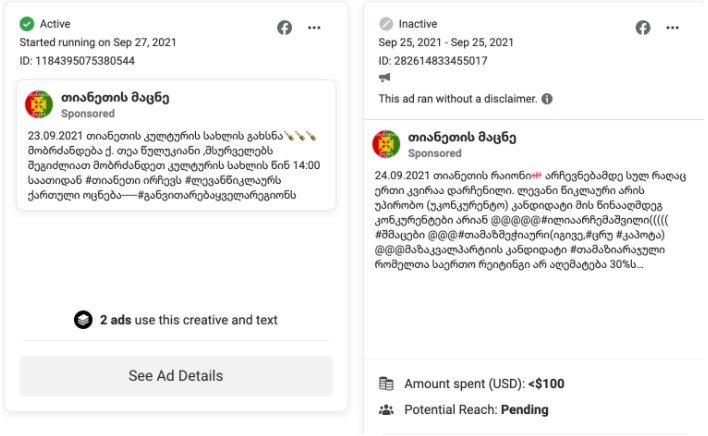 Facebook page Guria Times • გურია თაიმსი indicates in the description that its goal is to provide impartial information to the public and ensure rapid access to alternative sources. The page actively shares the stories targeting incumbent Ozurgeti Mayor Konstantine Sharashenidze, as well as the posts supporting the Georgian Dream. The page was created on August 27th, 2015 and its initial name was ‘Georgian Wall Street.’ On May 14th, 2019, the page changed its name to ShareBook • შეარბუქი and on July 30th, 2021, it was renamed to ‘Guria Times.’ 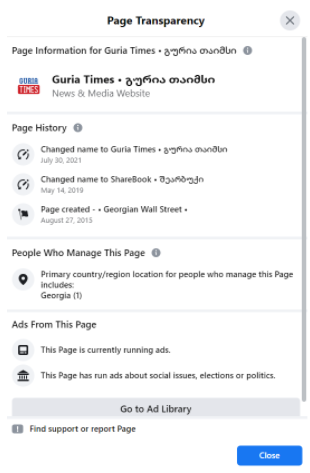 The page has sponsored a number of posts, with a large portion aimed at discrediting the incumbent Ozurgeti Mayor and supporting the Georgian Dream candidate. Like in 2017, Konstantine Sharashenidze again runs as an independent mayoral candidate for the 2021 elections. ‘Georgian Dream’ has named Avtandil Talakvadze, brother of former Parliament Speaker Archil Talakvadze, as its Ozurgeti mayoral candidate.

Noteworthy, from August 4th, 2020, to September 25th, 2021, Guria Times spent USD 495 on Facebook ads. Most of them were placed in a pre-election period to discredit Sharashenidze and support Avtandil Talakvadze. Earlier, Facebook disabled the ads account of the page because some of its posts had violated Facebook’s advertising policies.

Facebook page Samegrelo Times • სამეგრელო თაიმს was created on August 13th, 2021. The page indicates in its description that it disseminates news in Samegrelo. Almost all posts published on the page are related to electoral campaign activities.

The page actively spreads the posts discrediting Georgian Dream’s opponents, including the information about this or that person quitting former PM Giorgi Gakharia’s party and criticism against Giorgi Shengelia, a member of Gakharia’s party. 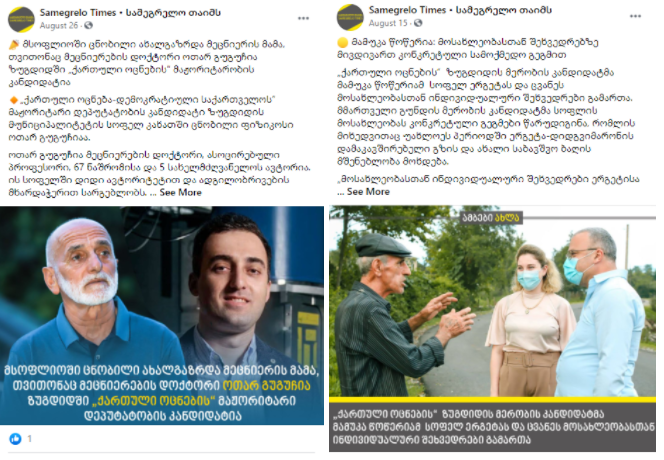 As for Georgian Dream’s opponents, the page spreads information only about their members quitting their respective parties.

Facebook page STV სამეგრელო, which, according to its description, is a news agency, was created on July 31st, 2016 and named Zugdidi. Later, the page changed its name on multiple occasions and was finally named STV.GE 2020 on July 17th. During the pre-election period, the page is actively covering campaign activities of Georgian Dream’s mayoral candidate, Mamuka Tsotseria, simultaneously publishing critical and negative information about the National Movement and For Georgia parties and sharing Imedi TV’s stories.

Besides the pages supportive of Georgian Dream, the pages posing as regional media have emerged on social media, publishing various posts in support of former PM Giorgi Gakharia and his For Georgia party. A page Voice of Imereti was created on August 20th, 2021. A day later, on August 21st, it changed its name to იმერეთის ხმა • Voice Of Imereti. The page, according to its description, poses as a media outlet; however, it actively shares the posts published on the official Facebook page of Sandro Sakhvadze, For Georgia’s Tkibuli mayoral candidate.

One more Facebook page “ჟრუანტელი” (Shivering), which frequently shares the posts of Voice of Imereti, the posts supportive of Gakharia, as well as the posts from the official Facebook page of Sandro Sakhvadze, For Georgia’s Tkibuli mayoral candidate, does not pose as a regional media and notes that it is a public and cultural page, adding that it posts exclusive materials. The page was created on December 28th, 2016 with the name “Jeunesse-საქართველოში” (Jeunesse in Georgia). On February 2nd, 2017, it changed its name to “Herbalife-სწორი კვება და ჯანსაღი ცხოვრება” (Herbalife – Correct Nutrition and Healthy Life). Later, on September 15th, 2017, it again changed its name to “როცა მთები გეძახის” (When Mountains are Calling You); on October 8th, 2019, it became “როცა ჟრუანტელი გაგივლის” (When You are Shivering) before being finally named “ჟრუანტელი” (Shivering) on November 8th, 2019.

Facebook page სამეგრელო • Samegrelo was created on September 24th, 2020 and according to its description, it aims to popularize the region. “Get acquainted with Samegrelo and its most beautiful nature, travel to Samegrelo through our page,” the page notes in its description. During the pre-election period, the page is actively spreading the posts supporting Giorgi Gakharia, his party as well as former Zugdidi Mayor and now For Georgia’s mayoral candidate, Gega Shengelia.

Facebook page Chiatura News, which indicates in its description that it spreads only impartial information about ongoing developments in Chiatura, was created on March 12th, 2014, and was initially called ‘Giorgi Kasradze’ before changing its name to ‘Chiatura News’ on March 29th, 2014. During the pre-election period, the page spreads posts supportive of Giorgi Kasradze, Chiatura Sakrebulo (local council) chairmanship candidate from the Alliance of Patriots party. Prior to being named a candidate for the 2021 local elections, Giorgi Kasradze served as a host of ‘Obieqtivi TV,’ a channel affiliated with the ‘Alliance of Patriots’ party. The posts supportive of Kasradze were actively published on the page during the 2020 pre-election period. Earlier, the page was actively sharing the posts from Kasradze’s Facebook profile.

ჭიათურის საათი (Chiatura Clock) is yet another Facebook page, posing as a TV program and spreading the posts supportive of Giorgi Kasradze. The page was created on January 18th, 2015, and has until now sponsored Giorgi Kasradze and Chiatura Sakrebulo membership candidates from the Alliance of Patriots, Tariel Mikatsadze and Giorgi Neparidze. The same practice was revealed during the 2020 elections. From August 4th, 2020, to September 26th, 2021, Giorgi Kasradze paid a total of USD 353 on Facebook ads.

Facebook page ხაშურის მუნიციპალიტეტი • Khashuri Municipality, which indicates khashurinews.ge in its description, was created on February 27th, 2011. It shares the posts supporting Tinatin Bolokadze, who is number one on Girchi – More Freedom’s Sakrebulo proportional list, as well as the posts targeting Georgian Dream and Khashuri independent mayoral candidate Valeri Gelashvili. The latter has withdrawn from the race in favor of the ruling party.

Info Imereti, posing as a regional news agency, was created on August 19th, 2021, a month and a half before the elections. The website Infoimereti.ge, from where the news articles are shared on the Facebook page, was registered on June 29th, 2021. The page actively covers the election campaign of opposition parties in the region, particularly in Kutaisi, simultaneously publishing negative and sarcastic posts about Georgian Dream’s campaign.

Facebook page რუსთავი•news was created on July 2nd, 2021. The page actively publishes critical posts against Georgian Dream MP and currently its Rustavi mayoral candidate, Nino Latsabidze, as well as other members of the ruling party.