Fabricated Quotes in the Name of Western Politicians About Russia 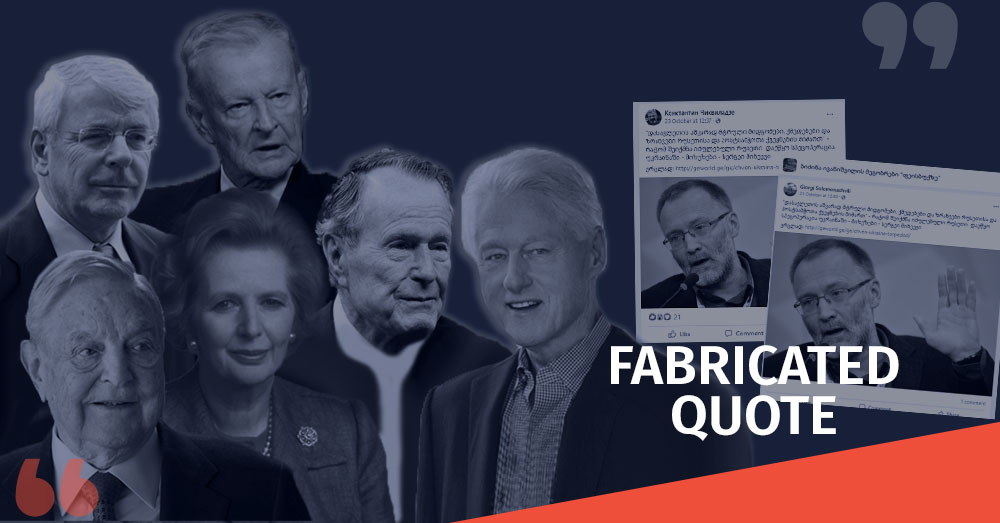 On October 23rd, the pro-Kremlin online media outlet “Georgia and World” published an article, featuring a number of alleged quotes by British and American politicians and public figures. As “Georgia and World” notes, the article is based on the statements of the Russian political scientist Sergey Mikheev, made on the air of “Radio Vesti.”

The article was also distributed in the Facebook group “Bidzina Ivanishvili’s friends on Facebook” and was published on the personal page of user Konstantin Chikviladze. 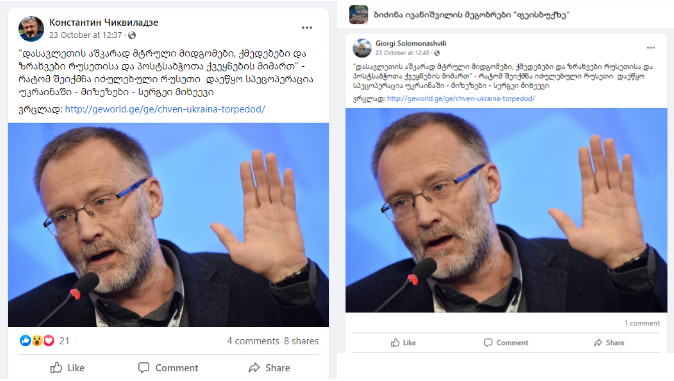 Six quotes disseminated by “Georgia and World” attributed to Bill Clinton, Margaret Thatcher, John Major, Zbigniew Brzezinski, George Soros and George Bush are fabricated. The quotes make it appear as if the West was driven by hostile motives towards Russia and other post-Soviet countries. Russian political scientist Sergei Mikheev used the quotes to justify Russia’s invasion of Ukraine.

Russian political scientist and Kremlin propagandist Sergey Mikheev voiced the popular phrases on the air of “Radio Vesti.” This segment of the program became especially viral in July, after the Russian director, actor and propagandist Nikita Mikhalkov used it in his original program Besogon TV. According to Mikhalkov, the goal of Western countries is to obtain Russia’s natural resources, using Ukraine only as a tool to achieve this goal, despite which, some Russian authorities still believed in the artificial smiles of Western leaders. To illustrate the real attitude of these leaders really towards Russia and Ukraine, Mikhalkov shows an excerpt from Mikheev’s program.

As of October 26th, Mikhalkov’s show has 1.3 million views on the YouTube channel alone. The program was verified by the fact-checkers, who identified a number of fabricated quotes in it. 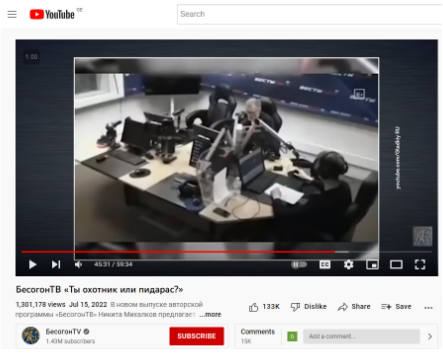 The article by “Georgia and World” contains alleged quotes from 6 public figures. According to the author of the article, Mikheev cited these quotes while talking about the “obviously hostile approaches, actions and intentions” of the West, which forced Russia to launch a special military operation in Ukraine.

The first quote was attributed to Bill Clinton, the 42nd president of the United States. According to the article, speaking about the state of the country in 1997, Clinton mentioned that in order to bring Boris Yeltsin to the head of the Russian government, the United States spent several billion dollars; however, by removing Russia as a competitor and getting the opportunity to export various natural resources from the country at a negligible price, the United States saw 5000% profit. Mikheev specifies that the said phrase was uttered by Clinton on February 7th.

In February 1997 (February 4th, not February 7th), during his annual presidential address, Bill Clinton did not talk about bringing Boris Yeltsin to power in Russia. Neither did he mention the funds invested by the US in Russia. During the speech, President Clinton mentioned Russia twice, and in both cases in a positive context: Clinton noted that the US needs to build a stable partnership with NATO and democratic Russia, and that the United States, together with Russia, has significantly reduced its nuclear arsenal.

The following two quotes were ascribed to the Prime Ministers of Great Britain, Margaret Thatcher and John Major. According to Mikheev, Thatcher said that the life of 15 million people who would serve the wells and mines is economically justified on the territory of Russia.

The authenticity of the mentioned quote was verified by the outlet “Настоящее Время” [Real Time] back in 2018. According to the publication, the quote first appeared in 1997 in the book by Russian publicist Andrei Parshev, where the author of the phrase was not named. The representative of the “Margaret Thatcher Foundation” also denied the authenticity of the mentioned quote. Notably, the fabricated quote attributed to Thatcher was also voiced by the spokeswoman of the Ministry of Foreign Affairs of Russia, Maria Zakharova, in an almost identical form.

Sergei Mikheev attributes the following phrase to John Major: “After the defeat in the Cold War, Russia’s task is to provide the successful countries with resources, but for this, they need only 50-60 million people.”

According to Delfi, the earliest version of the quote can be found in issue 31 of the Russian newspaper “Знание-власть” (Knowledge is Power), published in 1998. This newspaper was published during 1997-2014 and was characterized by pro-Soviet and anti-Western sentiments. Given that the paper does not specify when or where Major uttered the alleged quote, nor is it found in any reliable open sources, the quote is most likely fabricated.

Sergei Mikheev ascribes the next quote to Zbigniew Brzezinski, US President Jimmy Carter’s adviser on national security. According to the quote, the fewer people there are in the territory of the former Soviet Union, the easier it will be for the West to absorb it. As for the Slavs (especially the Russians, Belarusians and Ukrainians), they are unruly people, so they need to be exterminated. In addition, Mikheev noted that Brzezinski referred to Hitler as a stupid boy who acted openly, adding that they [Americans] would not leave any trace.

In a slightly different form, the alleged quote by Zbigniew Brzezinski circulated among Russian-language sources before as well. It aimed to spread anti-Semitic conspiracies. According to Delfi, Brzezinski never made a similar statement.

Another quote that Mikheev voiced in the program is attributed to philanthropist George Soros. The exact quote is as follows: “We need Ukraine as a torpedo in the war with Russia. The fate of the citizens of this country does not concern us at all.”

The quote was verified by the Ukrainian fact-checking platform “Vox Ukraine” and found that neither Soros’ interviews nor his statements contain a similar quote.

The second half of the quote, where Soros notes that he is not concerned about the fate of Ukrainians, was fact-checked by “Myth Detector” in the past as well. Instead of Soros, the quote, in fact, belongs to a Kremlin propagandist, Aleksandr Zapolkskis. For more information, see:

The last quote found in the article “Georgia and World” is attributed to the 41st President of the US, George Bush Sr. According to the quote, Bush prefers chaos and civil war in Russia, and not the tendencies of its formation into a united, strong and centralized state. It should be noted that this phrase does not appear in Nikita Mikhalkov’s program.

A phrase similar to the one mentioned above cannot be found in open sources. In addition, its content contradicts various reports describing Bush’s attitude towards Russia.

Nicholas Burns, President Bush’s adviser on matters related to the Soviet Union, recalls that the Bush administration perceived the chaos resulting from the collapse of the Soviet Union as a threat, because in the process the country’s rich nuclear arsenal and nuclear materials could be found in the hands of individuals or even criminal networks.

Also, Burns considers it an important achievement of Bush to establish a relationship based on trust with both Gorbachev and Yeltsin, which was proven by the fact that the United States did not exploit the tensions created in the Soviet Union in the last few months of the Cold War.

In 2018, after Bush’s death, Mikhail Gorbachev also noted his special contribution to ending the Cold War.

Sergei Mikheev, who is referred to as a political scientist in the Russian media, is the Director General of the “Caspian Cooperation Institute”. In 2020, Mikheev was featured in the investigation by Dossier, an investigative journalism platform founded by Russian opposition politician Mikhail Khodorkovsky, which published an investigation into possible Russian interference in the 2020 Georgian parliamentary elections.

According to the investigation, prior to the elections, with the funding received from Russia, the “Alliance of Patriots of Georgia” hired Sergey Mikheev and the company POLITSECRETS for the promotion of the party and signed a multi-million contract with them. Mikheev’s supervisors and people related to General Chernov were Valery Maximov, an employee of the Russian Federal Security Service (ФСБ), and Valery Chernyshev, an officer of the Main Division of the Russian General Staff (ГРУ).

Currently, Mikheev has his own radio program “Iron Logic”, in which he reviews the news of world politics. He also appears frequently in Russian propaganda programs, including “Evening with Solovyov.”