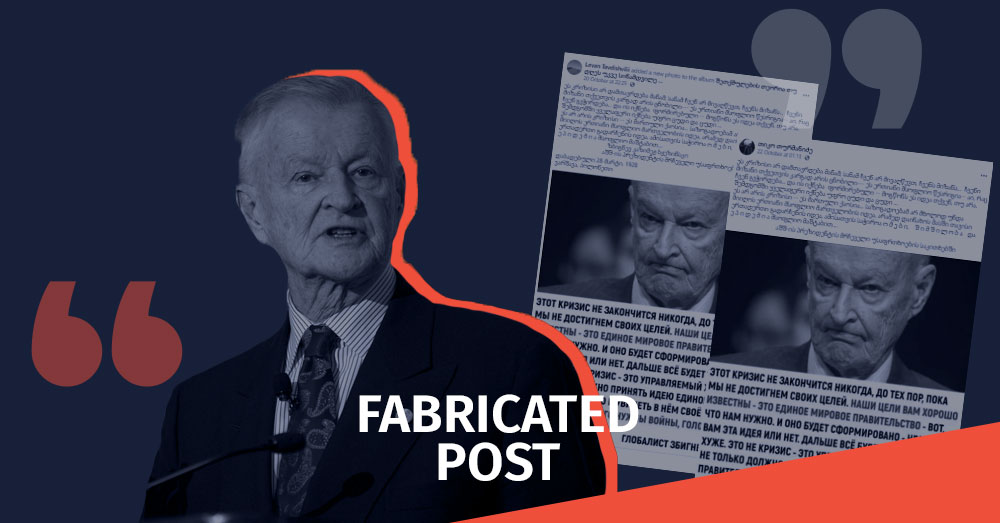 On October 20th, 2021, Facebook user Levan Tavidashvili published a quote from Zbigniew Brzezinski, a diplomat and the former adviser to the US President. The quote alleged that crises, wars, famines, epidemics would not end until the establishment of new world order. In the quote, Brzezinski also says that despite the people’s will, the “unified world order” is inevitable, and until then, humanity will live in a “managed chaos” that will get progressively worse. Levan Tavidashvili’s post is accompanied by a photo of Brzezinski with a Russian translation of the quote.

As of October 27th, the post has accumulated 251 shares. On October 22nd, an identical post has also been published by another Facebook user Tiko Turmanidze. None of the posts includes the source of the alleged quote of Brzezinski. 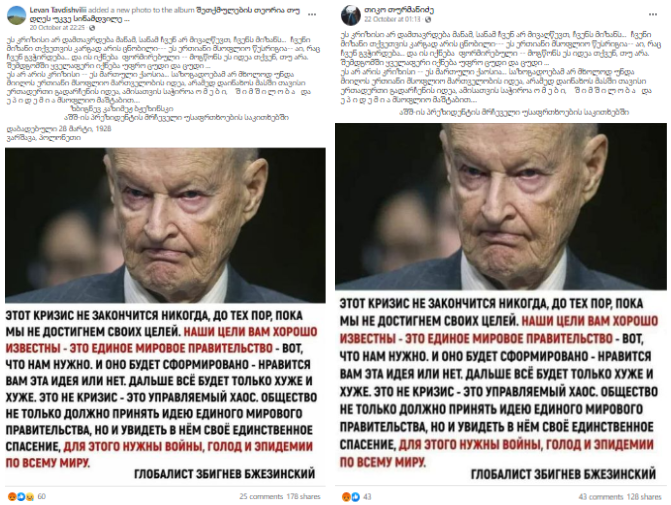 Without citing a proper source, the alleged quote of Zbigniew Brzezinski’s has been circulating on Russian-language social networks and blogs since 2012, although neither the full version nor a single fragment of the quote can be found in any credible open-source, including Brzezinski’s archives. Hence, there is no evidence that words identical or substantively similar to the prevailing quote were actually uttered or written by the American diplomat.

Neither the alleged quote of Brzezinski nor its English translation can be found using different search engines. The quote about the “unified world order”, “managed chaos,” epidemics and wars cannot be found in Brzezinski’s digitized archive in the Congress library, which includes transcripts of the former diplomat’s public speeches, letters and interviews.

According to the Yandex search engines, the quote is widely spread on the Russian-language Internet, being found on different social networks, websites and blogs. The quote was first published by iov75, a user of the Russian platform livejournal.com, on September 1st, 2012. The quote from the blog is dated June 4th, 2009 and offers the following introduction: “This crisis will not end in August, September, October, November, 2010, 2012, or 2015…” Noteworthy, the 2012 blog contains another fabricated, conspiratorial quote in the name of Brzezinski, claiming that the “new world order is directed against Russia and it will be created on its ruins.” 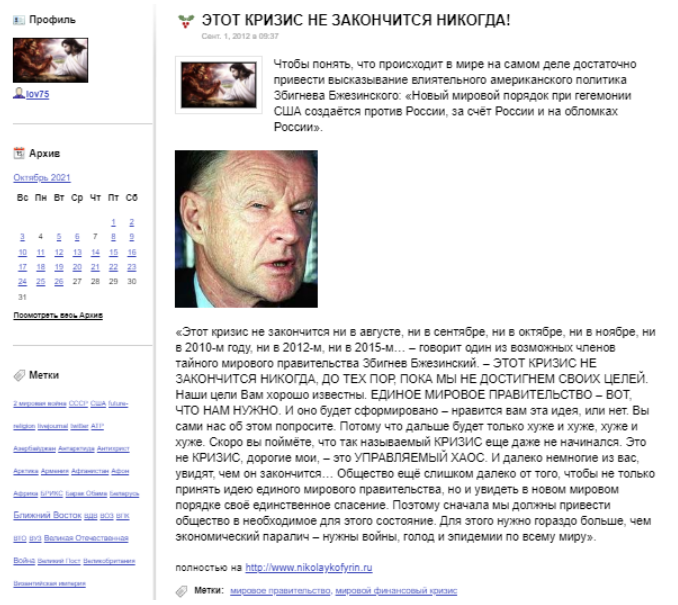 After 2012, the users of other Russian online platforms also dated the quote by June 4th, 2009, although the exact source of the quote was never indicated. 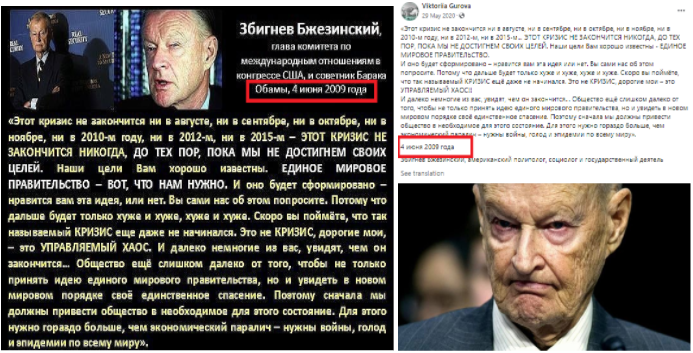 Open sources feature only one interview with Brzezinski, which the former diplomat gave to NBC’s “The Rachel Maddow Show” on June 4th, 2009. The full transcript of the program is available on the NBC NEWS website, although it does not contain a similar quote. During the show, Brzezinski talked about the recognition of the US role in overthrowing the Iranian government in 1953 and tackled ongoing processes in the Middle East. He never mentioned the words “crisis” or “world order.” Another public speech by Brzezinski is close to the date mentioned in Russian sources: on June 5th, 2009, Brzezinski spoke at a panel discussion with the RAND Corporation about US-Iranian policy, although this quote cannot be found in the conference transcript either.

In 2020 and 2021, the above-mentioned quote of Brzezinski was shared by Twitter and the Russian social network ВКонтакте users in the context of the Coronavirus pandemic, arguing that the global crisis caused by the pandemic was still being planned by globalist elites back in 2009.

Noteworthy, fabricated quotes of Zbigniew Brzezinski’s based on Russian sources have been disseminated by the Georgian pro-Kremlin media outlets in the past as well. For more information, see the materials prepared by “Myth Detector”: