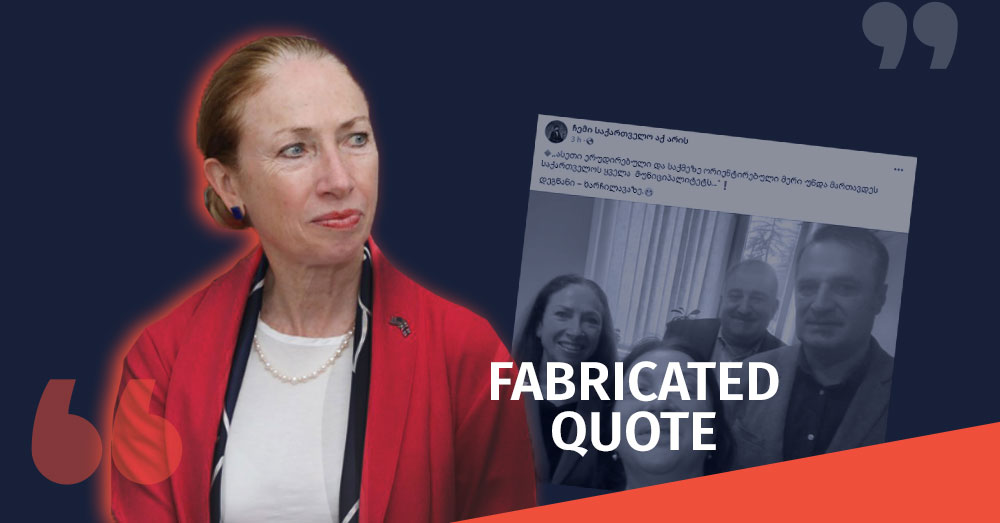 On November 11th, 2022, the Facebook account “Chemi Sakartvelo Ak Aris” [My Georgia is Here] published the following quote by the US Ambassador Kelly Degnan about the Mayor of Tsalkenjikha, Gia Kharchilava: “All municipalities of Georgia should be governed by an erudite and work-oriented mayors like him…” The post is accompanied by a photo featuring Kelly Degnan, the Mayor and Tamar Belkania, the vice-mayor of Tsalkenjikha.

Notably, similar posts were published by five Facebook users, including Ani Peikrishvili, an affiliate of the ruling Georgian Dream party, and Nikoloz Mzhavandze, the host of a pro-Kremlin TV channel “Sezoni TV.” 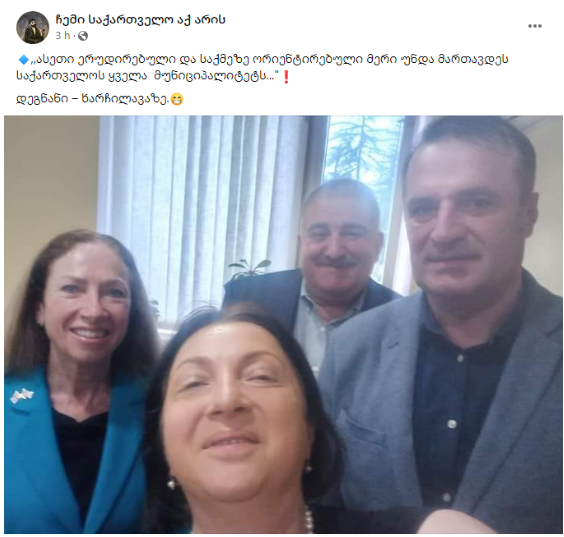 The quote attributed to Kelly Degnan is fabricated. An identical or similar comment made by the US Ambassador about Gia Kharchilava cannot be found in open sources.

No open sources include any information that Kelly Degnan made a similar or identical statement about the mayor of Tsalenjikha, Gia Kharchilava.

As for the photo attached to the disseminated posts, it was taken on July 19th during Degnan’s visit to Tsalenjikha. Tamar Belkania, the vice-mayor of the city, published the photo on her personal Facebook profile on July 19th. 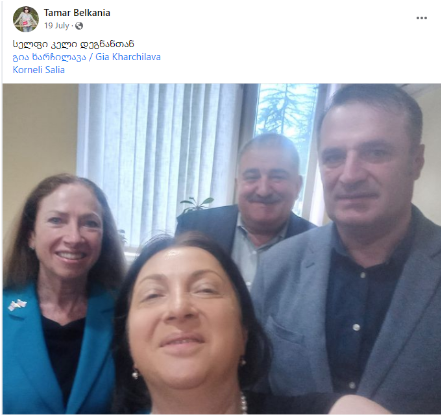 Kelly Degnan visited Tsalenjikha within the framework of his visit to Samegrelo-Zemo Svaneti. On July 19th, she met with the mayor and the members of the assembly in the Tsalenjikha City Hall. Within the framework of the visit, the ambassador received symbolic gifts. Degnan also visited the initiatives that are implemented in the municipality with US funding, including attending a media literacy seminar during her visit to the IT Academy. As part of her visit to Samegrelo, Degnan visited the American corner and the court of Zugdidi.

Commenting on her visit to Tsalenjikha and the meeting with the mayor, Degnan noted in to the media that together with the mayor and the chairman of the city council, she reviewed various issues, including the municipality’s future plans and educational opportunities:

Kelly Degnan, US Ambassador to Georgia: “I met the mayor of Tsalenjikha and the chairman of the city assembly, we had an interesting discussion. We talked about various issues, priorities of Tsalenjikha, including education. Also on the opportunities that are designed for young people, on the skills of teachers. We talked about creating an environment where we can work together to improve future opportunities. We must create such opportunities not only for young people, but also for the rest of the population.”

The account lists the Facebook page Mwerali.com and Nobelee as workplaces. According to the page description, it is a platform for beginner writers and their readers.

The page was created in 2013 and is currently managed from Germany and Georgia. The page has had different names at different times, including “Real Madrid Georgian Fans” and “TV Series.” 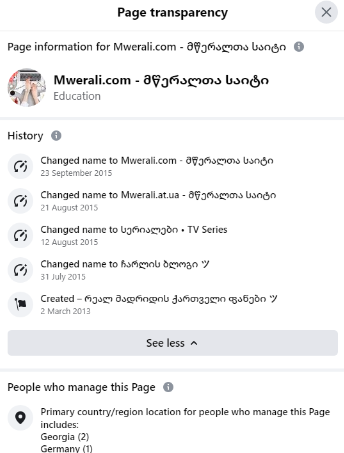 According to Nobelee’s description, it is a commercial product/service, the page has not featured any new content since 2017.