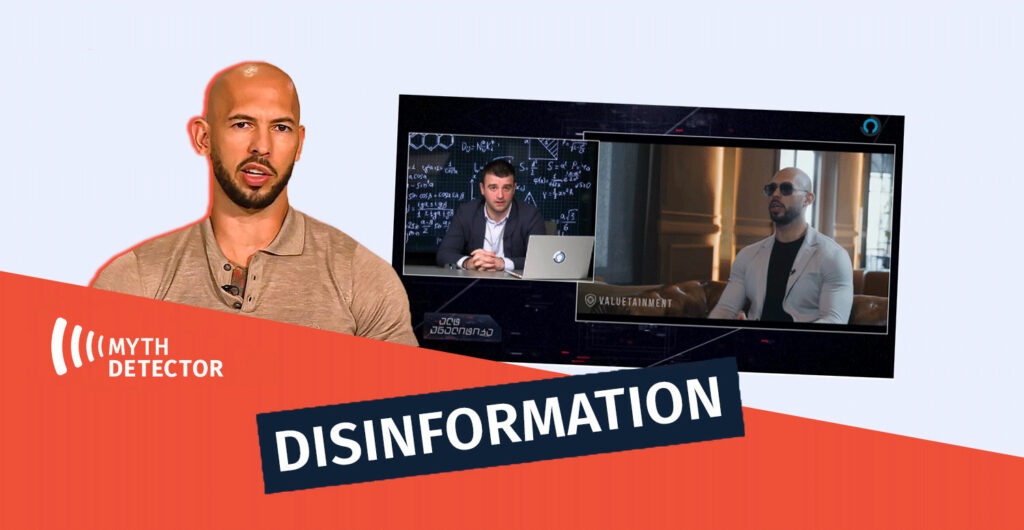 On January 12th, 2023, Giorgi Kardava, one of the hosts of the “Alt-Analytics” program of the pro-Kremlin “Alt-Info” TV and the chairman of the “Conservative Movement” party, claimed that influencer Andrew Tate was “arrested due to excessive masculinity” in the West. Kardava also noted that before being arrested, Tate was first blocked on social networks for his anti-liberal views, his fight against feminism, and his masculinity.

Giorgi Kardava, Conservative Movement: “Just because he says he’s anti-liberal; that he fights feminism, he’s masculine, he says the man should be the head of the family, and the institution of the family is important, the patriarchy is important; Because of that he’s very popular, and he’s been arrested by the liberals, he’s been blocked on every social media platform and was finally arrested.” 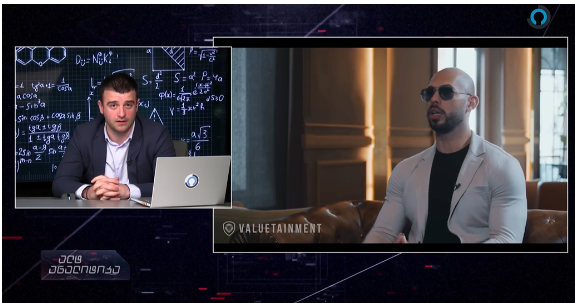 The hosts of the pro-Kremlin program manipulate with Andrew Tate’s masculinity to claim that he is allegedly persecuted for his views on the West. Speaking of which, they don’t mention the real reason for Tate’s arrest at all.

Andrew Tate was arrested in Romania on December 30th, 2022. He is charged with rape, human trafficking and forming a criminal group. Prosecutors stated that Tate, along with his brother Tristan and two other suspects, is accused of forming a criminal organization. According to the prosecutor’s office, the criminal group provided housing to women, and later exploited them and forced them to create materials containing pornographic content.

According to the Romanian Organized Crime and Terrorism Investigation Agency (DIICOT), they have identified 6 victims of human trafficking who were exploited by the criminal group formed by Tate.

As for social media bans, Tate’s accounts on Facebook, Instagram, YouTube and TikTok were suspended in August 2022 for violation of their community standards, which mainly entail the active use of hate speech and the dissemination of misogynistic statements.

36-year-old Andrew Tate is a former kickboxer. After ending his sports career, he participated in the British reality show Big Brother in 2016. Later on, a video was released showing Tate beating a woman with a belt, after which he was removed from the show.

Tate has been voicing sexist, misogynistic and violent comments for years now. For instance, in one of the interviews, Tate said that women are the property of men. He also noted that women who are victims of rape should ‘bear some responsibility if they put themselves in a position to be raped.” In his videos, Tate said openly how he would sexually harass a woman with a machete if she accused him of infidelity. He also said that he dates 18-19-year-old girls because they are inexperienced in relationships and can easily manipulate them.