European Convention on Human Rights does not prohibit Pride 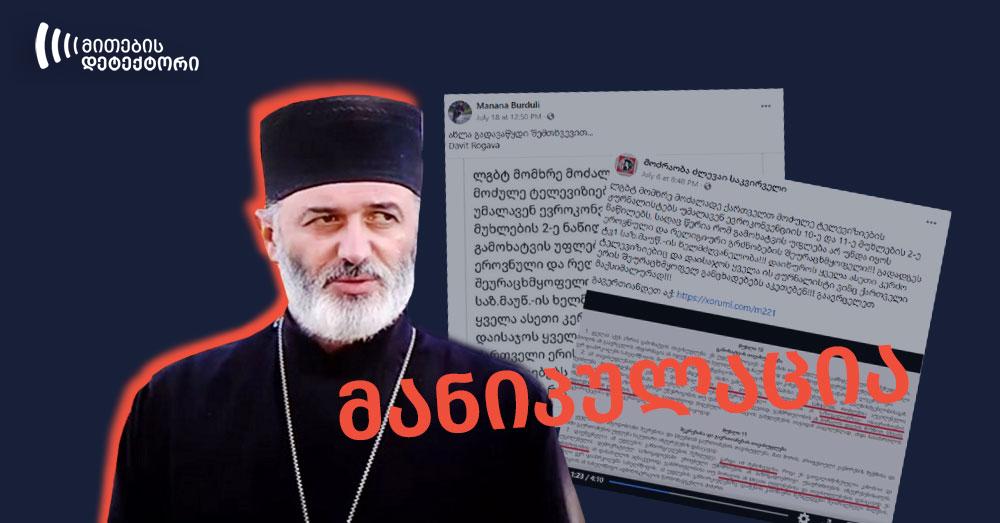 On July 18th, Facebook user Manana Burduli published a post claiming that Paragraph 2 of Articles 10 and 11 of the European Convention on Human Rights state that the freedom of expression should not be assaulting national and religious feelings. The author of the post demanded the resignation of the director of the Georgian Public Broadcaster, forced shut down of the private TV Channels and the punishment of the journalists.

The text published by Burduli was initially used in the video posted by the Facebook page “Modzraoba Dzlevai Sakvirveli.” The video points out Articles 10 and 11 of the European Convention and also includes a part of the Public Broadcaster’s interview, where the head of the Georgian Patriarchate’s Public Relations Office, Andria Jagmaidze, talks about the violent demonstration held on July 5th and shifts the responsibility to Tbilisi Pride. Jagmaidze claims that freedom of expression is not absolute.

As of July 22nd, 2021, the post of Burduli accumulated more than 1800 shares. The post identifies Davit Rogava as the primary source.

The interpretation that Articles 10 and 11 of the European Convention on Human Rights can prohibit pro-LGBTQ+ demonstrations and repress the local media is groundless. According to Article 11 of the Convention, the restriction of the freedom of expression should be predetermined by the law and justified by a legitimate reason necessary for a democratic society. The restriction should be based on laws that are compatible with the principles of equality, pluralism and tolerance. Article 11, as well as the ECHR judgement of the case “Identoba and others v. Georgia,” denote the need to raise awareness on the fundamental rights of different sexual minorities and the protection of the right of peaceful assembly.

Article 10 of the European Convention on Human Rights concerns the freedom of expression. The first part of the convention stresses that everyone has the right to freedom of expression. This right shall include the freedom to hold opinions and to receive and impart information and ideas without interference by public authority and regardless of frontiers. The second part, on the other hand, The exercise of these freedoms, since it carries with it duties and responsibilities, may be subject to such formalities, conditions, restrictions or penalties as are prescribed by law and are necessary in a democratic society, in the interests of national security, territorial integrity or public safety, for the prevention of disorder or crime, for the protection of health or morals, for the protection of the reputation or rights of others, for preventing the disclosure of information received in confidence, or for maintaining the authority and impartiality of the judiciary.”

Guide on Article 10 of the European Convention on Human Rights underscores that any given intervention to the right of expression should be “prescribed by law,” “pursue one of the legitimate aims” within the meaning of Article 10 § 2, and be “necessary in a democratic society.”

Interference with freedom of expression will breach the Convention if it fails to satisfy the criteria set out in the second paragraph of Article 10. It must therefore be determined whether it was “prescribed by law”. It is first and foremost up to the national authorities, and notably the courts, to interpret domestic law. Unless the interpretation is arbitrary or manifestly unreasonable, the Court’s role is confined to ascertaining whether the effects of that interpretation are compatible with the Convention.

The Court has thus developed in its case-law the autonomous concept of whether an interference is “proportionate to the legitimate aim pursued”, which is determined having regard to all the circumstances of the case using criteria established in the Court’s case-law and with the assistance of various principles and interpretation tools. The Court gives the utmost importance to the aspect of “censorship” and stresses that the judgement should not take the form of censorship.

Thus, in assessing the necessity of State interference in a democratic society, the Court uses the traditional principles developed in its case-law, which require it to determine whether there existed a pressing social need for the interference, whether it was proportionate to the legitimate aim pursued and whether the reasons given by the national authorities to justify it were relevant and sufficient.

The ECHR judgement for the case “Identoba and others v. Georgia” concerned the violence stemming from the private individuals towards the peaceful demonstrators and the lack of protection from the state police. The Court noted that the applicants’ complaints under Articles 10 and 11 of the Convention are based on the allegations that the attacks by private individuals on their physical integrity, coupled with the passivity of the police in the face of the violence, disrupted their peaceful march. In such circumstances, Article 11 is to be regarded as a lex specialis , and it is unnecessary to take the complaint under Article 10 into consideration separately. On the other hand, notwithstanding its autonomous role and particular sphere of application, Article 11 must, in the present case, also be considered, if need be, in the light of principles developed under Article 10.

Furthermore, given that the facts of the present case fall within the ambit of Article 11 of the Convention, and the applicants’ claim that the breach of their right to freedom of peaceful assembly had discriminatory overtones, the Court considered that Article 14 is similarly applicable in the present case, and its examination under the former provision must be conducted in conjunction with the latter.

The Court reiterated its findings that the attack on the applicants during the march of 17 May 2012 to mark the International Day against Homophobia was instigated by those with a hostile attitude towards the LGBT community in Georgia. Furthermore, that violence, which consisted mostly of hate speech and serious threats, but also some sporadic physical abuse in illustration of the reality of the threats, rendered the fear, anxiety and insecurity experienced by all thirteen applicants severe enough to reach the relevant threshold under Article 3 read in conjunction with Article 14 of the Convention.

The court further clarified that the organizers of the march specifically warned the police about the likelihood of abuse, the law-enforcement authorities were under a compelling positive obligation to protect the demonstrators, including the applicants, which they failed to do. Lastly, the authorities fell short of their procedural obligation to investigate what went wrong during the incident of 17 May 2012, with particular emphasis on unmasking the bias motive and identifying those responsible for committing the homophobic violence. In the absence of such a meaningful investigation, it would be difficult for the respondent State to implement measures aimed at improving the policing of similar peaceful demonstrations in the future, thus undermining public confidence in the State’s anti-discrimination policy.

The narratives regarding Article 10 of the European Convention have been misinterpreted by various actors before. For more, see our articles: