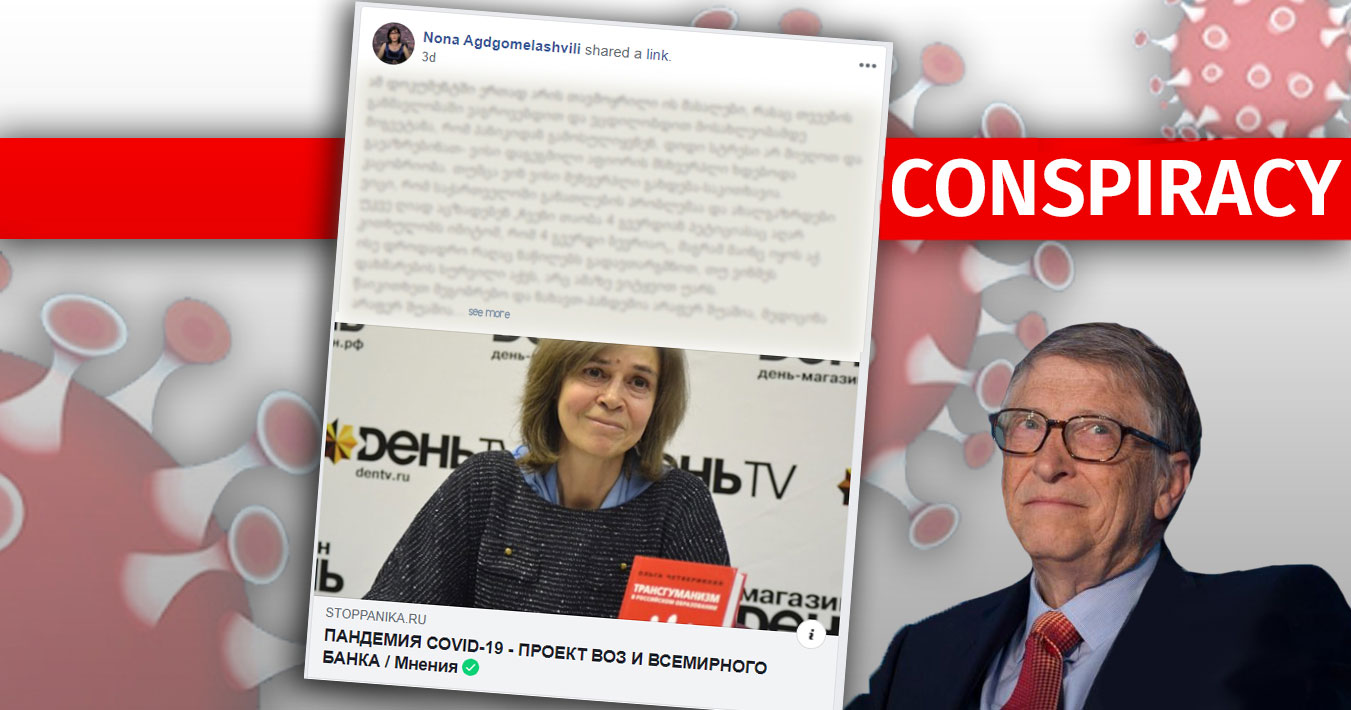 On October 11, Facebook user Nona Agdgomelashvili published a post to a public group “ერთად დავამარცხოთ კორონავირუსი/COVID-19” (Let’s defeat COVID-19 together), where she describes the coronavirus-related developments as a pre-planned hoax. She notes that the measures imposed to fight COVID-19, among others wearing face masks, social distancing, testing, self-isolation, quarantine and online education, serve two goals: 1. To reduce population and 2. To bring financial gains to pharmaceutical companies that will also lead to depopulation. The post refers to the Russian website stoppanika.ru as its source. As of October 15, the post has 139 shares, 88 comments and 168 reactions.

The claims as if the pandemic and the measures imposed to fight COVID-19 aim at depopulation as well as enrichment of pharmaceutical companies are conspiracy theories. The claim about depopulation comes from the misinterpreted remarks made Bill Gates, while a conspiracy theory as if the goal of vaccination is to enrich pharmaceutical companies is one of the main arguments voiced by anti-vaccine groups.

The claim as if the goal of vaccination is to depopulate the world is a conspiracy theory that originated from the misinterpreted remarks made by Bill Gates.

The conspiracy theory as if depopulation is planned through COVID-19 vaccines is widely circulating on social media and various online editions. This conspiracy theory is mainly linked to Bill Gates and his public address in 2010. Bill Gates gave a speech “Innovating to zero” at Ted Talks, in which he spoke about reduction of CO2 emissions and noted that vaccination may play a significant role in terms of controlling the population growth.

Bill Gates: “The world today has 6.8 billion people. That’s headed up to about nine billion. Now, if we do a really great job on new vaccines, health care, reproductive health services, we could lower that [population growth rate] by, perhaps, 10 or 15 percent.”

The out-of-context quote by Bill Gates is being spread with a misleading interpretation, as if Gates is trying to lower human ability to reproduce and consequently, to reduce human population.

In fact, the founder of Microsoft speaks about slowing population growth, rather than reduction of the population. This was also confirmed by the famous fact-checking platforms PolitFact and Snopes that have already checked fake stories on the issue. Gates notes that vaccines are crucial for reduction of child mortality in the developing countries, which, on its part, will slow population growth, according to Bill Gates. He supposes that when more children survive, parents will choose to have fewer children. Women will have a number of children they can support, send them to school and take care about their health, which is a precondition for overcoming poverty and improving living standards. As for the carbon dioxide emissions, according to Bill Gates, reducing the world population growth will also reduce CO2 emissions. Accordingly, vaccines are not directed against the world population. Myth Detector wrote about the same conspiracy theory in its earlier article:

Where does the myth about Bill Gates and vaccines come from?

According to Snopes, the Bill and Melinda Gates Foundation (BMGF) is one of the largest private foundations, with offices all over the world, including India, where the organization is working to reduce poverty and improve access to healthcare. The Gates Foundation is also financing the global health organization PATH (Program for Appropriate Technology in Health) that provided more than 20,000 girls between the ages of 10-14 with free HPV vaccines in several poor regions of India in 2009. India’s government halted the effort in April 2010, however, when local news reports claimed seven of the girls involved in the trial had died after receiving their vaccines. Although investigators concluded that the deaths were not related to the vaccines (for instance, one of the deaths related to a girl who drowned in a quarry, and another was linked to a snake bite), rumors related to Bill Gates are still circulating intensively. For example, according to the reports spread in 2017, the Gates Foundation and PATH were expelled from India. The Indian government, however, denied the reports as false. Both organizations continue their activities in the country.

Responding to recent rumors linking the U.S. billionaire with chips, vaccines and COVID-19 pandemic, Bill Gates said on phone call: “It’s almost hard to deny this stuff because it’s so stupid or strange that even to repeat it gives it credibility.”

A conspiracy theory as if the goal of vaccination is to enrich pharmaceutical companies is one of the main arguments voiced by anti-vaccine groups.

The claim as if Bill Gates and Anthony Fauci, director of the National Institute of Allergy and Infectious Diseases, gained profits from vaccines is a conspiracy theory that was spread earlier too. It is noteworthy that according to Snopes, QAnon and anti-vaccine groups were promoting an opinion even prior to the COVID-19 pandemic that vaccination had been dictated by financial interests of large pharmaceutical companies. The QAnon group was spreading conspiracy theories and claiming that U.S. President Donald Trump was pursuing a secret war against elite, satanic pedophiles in the government, business and media. The conspiracy theories spread by this group differ from each other and frequently, even contradict each other.

According to BBC, anti-vaccine groups promote an opinion that the pandemic has been invented and its goal is to vaccinate world population. For example, one popular Italian video has a caption claiming that the pandemic has been “invented.” The narrator of the clip, an Italian researcher with a degree in pharmacology claims the end goal is to get everyone vaccinated to “bring money and corruption into the already full pockets of some.” The video has been viewed more than 700,000 times on Facebook. BBC notes that there is no evidence whatsoever to support his theory that the pandemic is a hoax. It is true that whichever pharmaceutical company develops a vaccine could potentially profit from the success, but the idea that this potential profit would be a motive to invent a pandemic is far-fetched.

The Associated Press reported in April 2020 that “a coronavirus vaccine is still months or years away, but groups that peddle misinformation about immunizations are already taking aim, potentially eroding confidence in what could be humanity’s best chance to defeat the virus.”