ECHR: Counterdemonstration Cannot Restrict the Exercise of the Right to Demonstrate 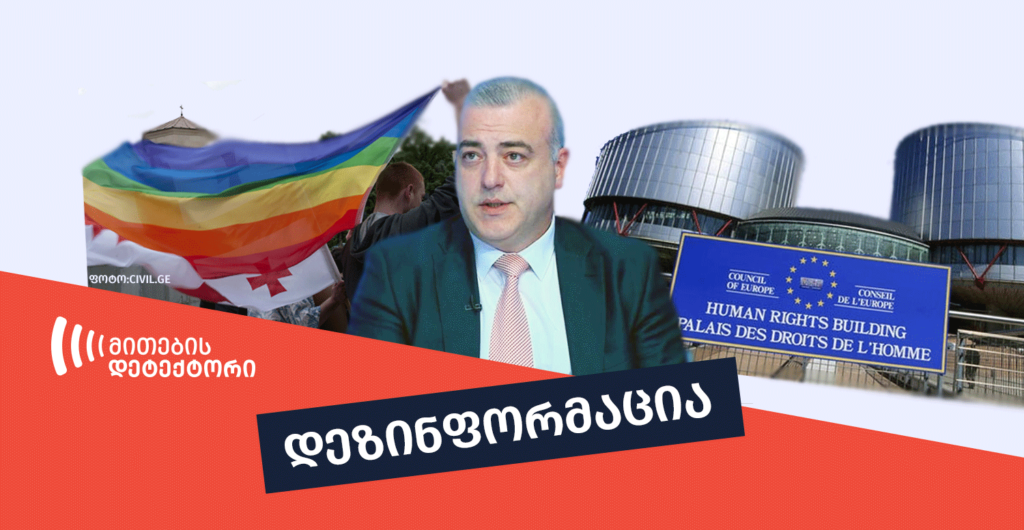 On June 21, head of the “Development Laboratory of Georgia” Irakli Gogava spoke on “Obiektivi” TV about Pride March planned by Tbilisi Pride and said that according to European Convention on Human Rights, if the freedom of assembly goes against the morals of the society at its core, the government has the right to restrict it.

Irakli Gogava’s interpretation is false. Article 11 of the European Convention on Human Rights touches upon the freedom of assembly, which explains in a respective section that the right of peaceful assembly extends to the sexual minorities and the state has a positive obligation to ensure this right is exercised. Strasbourg Court’s ruling on the “Identoba and others v Georgia” case in 2015 was precisely based on this.

According to Article 11 of the European Convention on Human Rights, everyone has a right to freedom of peaceful assembly. These rights cannot be restricted unless it’s lawful and necessary to protect national security or public safety, to prevent disorder and crime, to protect health or morals and reputation or rights of other people.

According to the guide on Article 11 published by the Council of Europe, right to peaceful assembly comprise negative, as well as positive obligations of the state. Positive obligations imply ensuring enjoyment of the right for people of unpopular views or belonging to minorities. According to the explanation, the European Court of Human Rights concluded on the cases of events organized in support of sexual minorities that the state has a positive obligation to enable the event to takes place and to restrict homophobic verbal assaults and physical pressures from the members of counterdemonstrations.

According to the explanation, the European Court of Human Rights believes that refusing LGBT individuals their right to assemble due to possible aggression targeting the assembly from individuals who repudiate homosexuality violates Article 11 of the convention. The court ruled this on the 2019 case of Zhdanov and others v. Russia. The court concluded that it’s the Russian government’s obligation to enforce respective measures so interested individuals could hold meetings without having to fear physical violence. According to the court, despite the fact that the government could’ve taken numerous measures to ensure the latter, it chose to eradicate the cause of tension and restrict the freedom of assembly. The court also ruled that the state refusing the right to assembly was a violation of Article 14 of the convention because of sexual orientation-based discrimination.

According to the guide, the maintenance and development of minority cultures cannot be considered a threat to democratic society whether it builds tension or not.
In the guide, one of the examples given is the case of “Identoba and others v. Georgia”.

European Court of Human Rights made a ruling on the case “Identoba and others v. Georgia” in 2015. The case was about violence from private persons and insufficient protection from police during the peaceful demonstration on May 17, 2012. The dispute was based on Article 11 violation.

The court concluded that disruption of a peaceful march marking the fight against homophobia on May 17, 2012, was a breach of Article 11 since convention protects public forms of expression including peaceful assembly and freedom of expression to raise awareness about the rights of sexual minorities and in support of the said minorities. The court also concluded that the state couldn’t ensure the protection of marchers from discrimination-motivated violence:

“Given the attitudes in parts of Georgian society towards the sexual minorities, the authorities knew or should have known of the risk of tensions associated with the applicant organization’s street march to mark the International Day Against Homophobia. They were thus under an obligation to use any means possible, for instance by making public statements in advance of the demonstration to advocate, without any ambiguity, a tolerant, conciliatory stance as well as to warn potential law-breakers of the nature of possible sanctions”

As a result, the court granted victim status to applicants and mandated the state to pay monetary compensation to them.

They also should ensure that law enforcement authorities protect participants in peaceful demonstrations in support of LGBT rights and prevent unlawful disruption of enjoyment of their right to freedom of assembly. The recommendation also notes that the state authorities should publicly condemn any unlawful interferences with the rights of expression and peaceful assembly, especially when it concerns LGBT human rights.

Therefore, Irakli Gogava’s interpretation claiming that Pride is an exception to Article 11 of the European Convention on Human Rights and the state has a right to restrict it is false. As it’s explained in the guide on Article 11, as well as in the recommendations of the Council of Europe and ruling of Strasbourg Court, the right of peaceful assembly defined in Article 11 extends to minorities, including sexual minorities even when society has a mixed attitude towards it and the state has a positive obligation to ensure these groups enjoy their right of assembly.