Does Vaccination Cause Heart Inflammation? 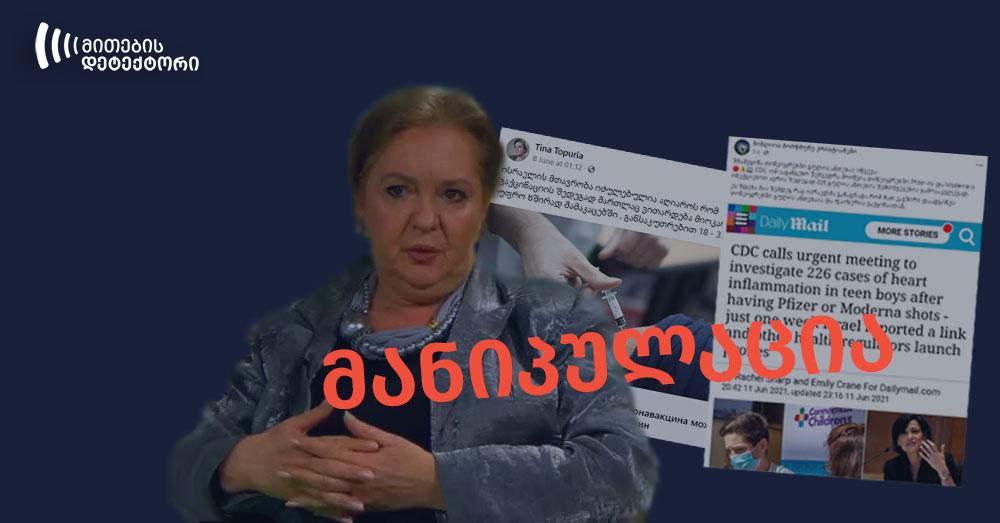 Information about COVID vaccination causing heart inflammation in young people has been disseminated on a social network. In the post published by “ბიბლიის მორწმუნე ქრისტიანები” (Bible Believing Christians) on June 13, it’s said that vaccine causes myocarditis in teenagers. Whereas, according to anti-vaxxer homeopath Tina Topuria’s June 8 post, Israel has admitted that vaccine causes the development of myocarditis. 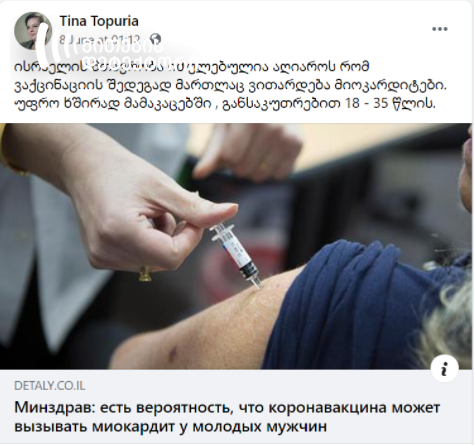 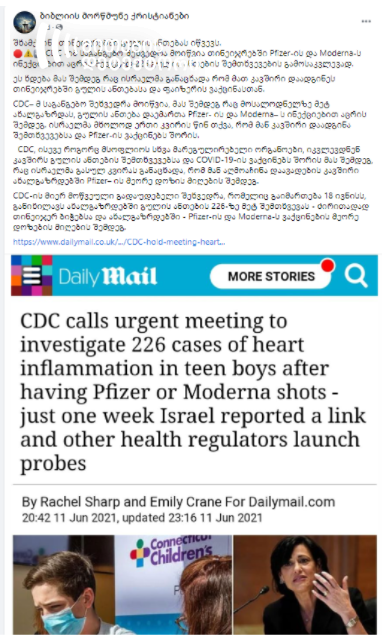 The post disseminated by “Bible Believing Christians” says that “poisonous vaccine causes heart inflammation in teenagers” and to illustrate the point, it provides dailymail’s article about the U.S. Center for Disease Control’s (CDC) June 18 “emergency meeting” on heart inflammations in young boys developed after the vaccination. CDC announced the meeting on June 10, the meeting was set to discuss and examine 226 cases of heart inflammation. The aforesaid cases were reported after the vaccination and the research on the cause of it has started. CDC’s official spokesperson Tom Shimabukuro stated that these are preliminary reports and some might not turn out to be myocarditis or pericarditis after the examination. It’s worth mentioning that over 145 million people in the U.S have been fully vaccinated, while possible cases of two types of heart inflammations out of three types- myocarditis, and pericarditis has been detected only in 226 people and it’s yet to be determined if there’s a direct correlation between vaccination and heart inflammation.

In May, CDC stated that according to the data from the Vaccine Adverse Event Reporting System (VAERS) higher than expected number of myocarditis was observed in youth, however, data from another database -Vaccine Safety Datalink (VSD) did not indicate anything alarming and showed that the rate didn’t differ from expectations. It’s worth mentioning that any citizen can add their case report to VAERS and it’s stated on the webpage itself, the reports on adverse events cannot be evidence of a vaccine causing the complications. Whereas the VSD database is managed by 9 healthcare organizations together with CDC and only uploads checked data.

As Tina Topuria claims, the Israeli government has admitted that myocarditis develops after the vaccination.

In reality, the Israeli Health Ministry made a statement on June 1 saying that some cases of heart inflammation detected in young males can be linked to the COVID vaccine. In the Ministry’s statement, it’s noted that a probable link between the second dose of the Pfizer vaccine and myocarditis was observed in males aged 16-30. In response to the statement from the Israeli Health Ministry, company Pfizer notes that no causal link has been established between vaccine and heart inflammation and since Pfizer meets regularly with the Vaccine Safety Department of the Israeli Ministry of Health to review all possible adverse events, therefore the company was informed about the aforesaid observations made by Israel. According to the Israeli Health Ministry, the risk of the virus is far greater than the possible adverse events of the vaccination and thus, on June 6, Israel launched nationwide vaccination in adolescents age 12-15.

More than 5 million got vaccinated in Israel between December 2020 and May 2021, 275 cases of myocarditis were detected and 95% of those cases were classified as mild, whereas most patients spent no more than 4 days in the clinics. It’s noteworthy that the incidence of myocarditis is approximately 1.5 million cases worldwide per year, this number is based on the estimation of 10 to 20 cases per 100,000 persons because myocarditis is frequently undiagnosed and therefore, proceeds without being calculated into statistics.

As for the European regulatory authority, per European Medicines Agency (EMA), a small number of myocarditis and pericarditis cases were reported following the vaccination, whereas the research on any type of correlation between the latter and vaccination is still underway. In the statement, EMA also notes that the incidence of myocarditis and pericarditis in the European Economic Area (EEA) ranges from 1 to 10 in 100,000 people per year, and in the majority of cases, the health condition recovers without additional medical intervention or on their own.