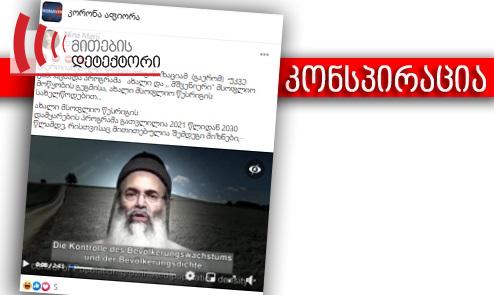 Update: In the originally published article “Myth Detector” claimed that the rabbi Amnon Yitzhak is an animated character. While the character is indeed animated in the Шок-инфo’s video, rabbi Amnon Yitzhak is a real person, who often spreads conspiracies regarding the new world order, United Nations, the pope, coronavirus and others. In February 2021, because of spreading conspiracy theories, Facebook removed groups affiliated with Amnon Yitzhak.

On October 1, 2020, Facebook user Nina Marji spread a video with Russian voiceover translation in a public group „კორონა აფიორა“ (Coronavirus Fraud), where an animated character speaks about the UN-developed program on a new world order.

According to the video, the United Nations has developed a program on establishing the new world order in 2021-2030. The video claims that the UN has outlined its goals to eventually rule the world and these goals envisage an end to families and state sovereignty, implanting microchips in humans, spreading 5G technology, spreading global digital currency, creating world army and so on. Georgian-language translation of the video is accompanying the posts published by Georgian users. 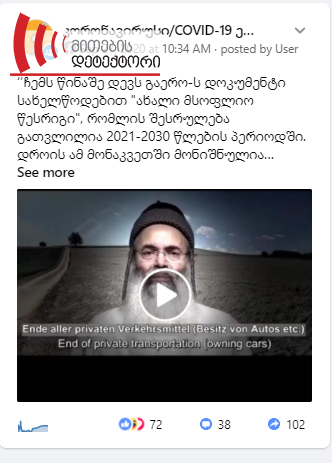 On September 27, the video as well as its Georgian-language translation was spread in a public group “კორონავირუსი/COVID-19 ერთად დავამარცხოთ” (Let us defeat coronavirus/COVID-19 together).  According to CrowdTangle, the content discovery platform, the post had 102 shares; however, currently, it cannot be searched in the group. Besides public groups, the video with identical translation was spread in a form of individual posts. Nino Bregadze is one of Facebook users who posted the video with Georgian translation on September 28. The same user spread a Russian conspiracy theory on the World Bank Strategy for 2025 on Facebook a couple of days ago.

The claims of Georgian users and Russian-language video about the existence of the UN program on establishing the new world order in 2021-2030 have no evidence and represent a conspiracy theory. The document with the same name or content cannot be searched through open sources.

The post as well as the video claims that the UN has adopted the document on establishing the new world order, which outlines the goals for 2021-2030. The conspiracy theory about UN’s alleged plan for 2021-2030 was first spread by Facebook user Vernon Adkinson on May 10, 2020. Shortly after the post went viral, its content was verified by USA Today, a factchecking platform. Daniela Gross, a spokesperson for the U.N. Secretary-General, told USA Today that the claim is entirely fabricated, adding that the UN has not adopted such document.

Apparently, American, as well as Russian and Georgian conspiracy theories are manipulating with two UN documents –  “Agenda 21” and “Agenda 30.” The UN adopted both documents in connection with sustainable development goals and both are available online. Agenda 21 was adopted by the United Nations Conference on Environment & Development in Rio de Janerio, Brazil in 1992. The document focuses on global social and economic challenges.

Agenda 30 is the resolution adopted by the UN in 2015, outlining sustainable development goals and targets for the next 15 years. These goals are:

The Russian-language video accompanying Georgian users’ posts was published on YouTube channel Шок-инфo on September 25. According to the video description, a famous Jewish rabbi, Amnon Yitzhak, is allegedly reading the UN documents on “the new world order.” The video allegedly featuring the Jewish rabbi who uncovers the UN plans has gone viral on Russian social media. Noteworthy that the video is featuring an animated character. 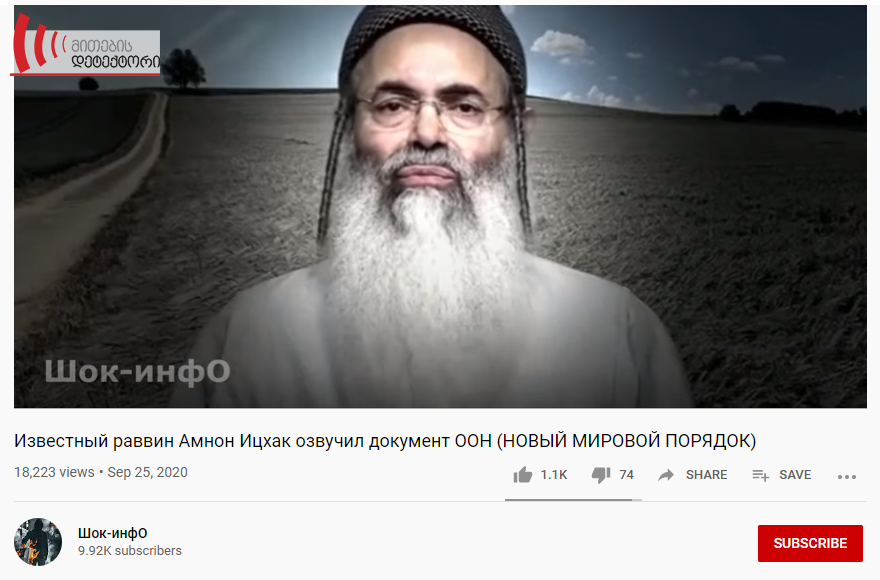