Does the EU Questionnaire Oblige Georgia to Legalize Same-sex Marriage? 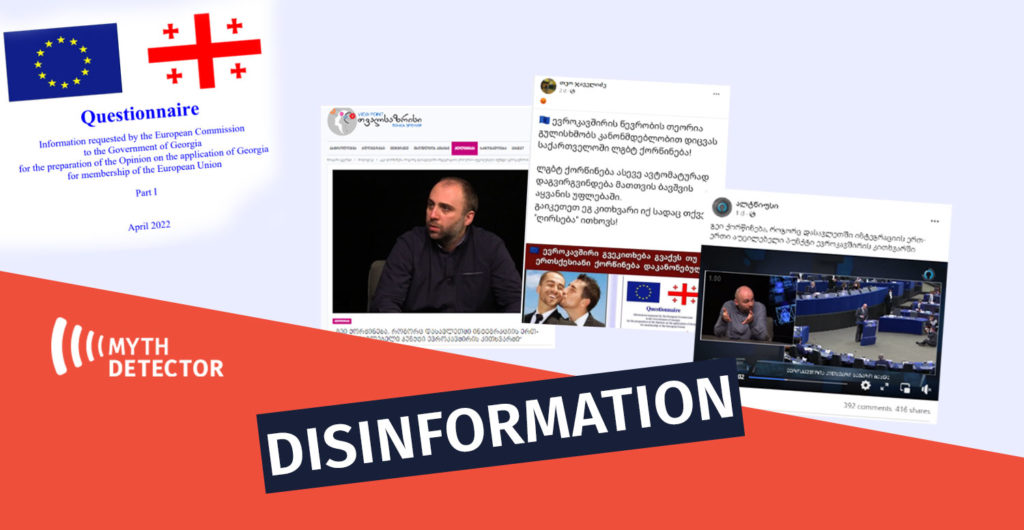 Update: A statement from the EU Delegation to Georgia was added to the article.

On April 16th, the Facebook page “Altnews” published an excerpt from pro-Kremlin Alt-Info’s program “Alternative Vision” with the following caption: “Gay marriage as one of the preconditions of the EU integration in the EU questionnaire.” In the video, Shota Martinenko, one of the leaders of the “Conservative Movement,” talks about the EU questionnaire handed over to Georgia and says that in order to join the EU, Georgia would have to legalize “gay marriage,” which was confirmed by the EU questionnaire. Martinenko further stressed that the decision to admit a specific state to the EU depends only on the points listed in the questionnaire and the answers given to them.

The video has been cut out from the April 15th program of “Alternative Vision”. Information about the EU questionnaire with an identical description was also published by the online outlet “Tvalsazrisi”.

Similar information was voiced by various individual Facebook accounts as well. Facebook users (1, 2) wrote that the questionnaire presents a list of conditions required by the European Union to admit a certain candidate.

The claims regarding the aspect of family rights listed in the EU questionnaire are misleading and false. In fact: 1) Nowhere in the EU questionnaire provided to Georgia is it written that legalizing same-sex marriage is a necessary condition for the country to join the EU; 2) The decision to join the EU is not made solely on the basis of the questionnaire, since the process includes expert visits, their reports and consultations with various stakeholders.  In a comment to Myth Detector, the EU Delegation to Georgia stated that same-sex marriage or other types of partnerships is not an “EU standard” but a decision made by its member states autonomously.

EU Commissioner Olivér Várhelyi handed over the questionnaire on EU membership to the Georgian Foreign Minister on April 11th in Luxembourg. On April 15th, the Ministry of Foreign Affairs has made the questionnaire public. 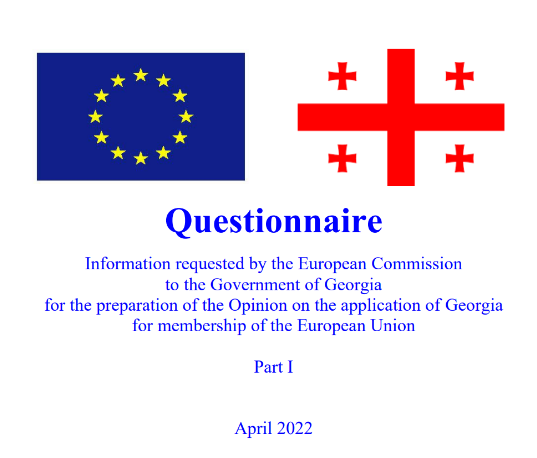 The questionnaire consists of a total of 369 questions. The question about marriage equality is listed as number 198 under Section E “Right to marry and right to found a family.”

Neither this nor any other part of the questionnaire states that legalizing the right to marriage for same-sex couples is a prerequisite for a country to join the EU. This question has the sole purpose of obtaining information on local legislation on marriage.

While commenting on the questionnaire, the EU Delegation also noted that the purpose of the questionnaire is to help the European Commission properly assess the situation in the applicant country within a wide array of areas. The delegation stressed that in many cases the questions are directly related to requirements or standards that are set in the EU and are compulsory for obtaining EU membership, but not always.

“Question No. 198 concerns the right to marry and found a family in general, where it is specifically asked whether partnerships are also open to same-sex couples in the applicant country. It should be noted in this context that same-sex marriage or other types of partnership is not a norm throughout the EU, nor an “EU standard”, but a decision for its Member States to take autonomously, as it falls under their national competencies.” – Notes the EU Delegation to Georgia.

The fact that same-sex marriage is not a mandatory requirement for EU membership is also evidenced by the fact that such a union is not legal in several EU member states.

According to Shota Martinenko, the membership of a particular state in the EU is determined only by the answers given to the EU membership questionnaire, which is untrue.

According to the definition by the European Union, while the questionnaire plays a major part in the process, it is not the only determining factor.

In parallel with the questionnaire, the Commission sends a number of observer missions of experts from the Member States to the applicant country. In addition, the Commission receives reports from independent experts on the country and meets with civil society organizations, international organizations and other stakeholders for consultations and evaluates the information received. At the same time, any interested party can send specific information to the commission.

Disinformation around the fact that Georgia would have to legalize same-sex marriage if becoming a member of the EU, has been prevalent for years now. For more on the topic, see the articles by “Myth Detector:”