On June 14th, the Russian-speaking Facebook user ‘Olga Putilina’ published a photo and an alleged quote of the former US Secretary of State Hillary Clinton. According to the post, Clinton believes negotiations between Ukraine and Russia are impossible until Russia’s defeat and that “the US must hand over part of its nuclear arsenal to Ukraine because it’s an all-or-nothing war in Ukraine. Later on, the same photo was published by another Russian-speaking Facebook user with the following description: “As it turned out, [Hillary Clinton] explained to the whole world that Russia is at war not with Ukraine, but with the US.” 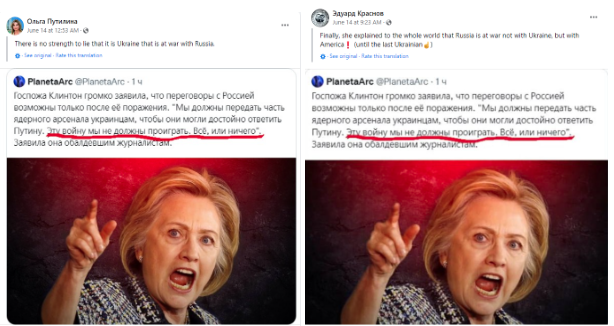 The quote in the name of Hillary Clinton is fabricated. The information that the former Secretary of State called on the US to give part of its nuclear arsenal to Ukraine cannot be found in any open source. As for Clinton’s position on holding negotiations with Russia, she said in an interview with Radio France on June 11 that she agreed with the Ukrainians’ position that premature talks were futile until the defeat of Putin and withdrawal of all Russian troops from the Ukrainian territory.

No open-source contains the information about Hillary Clinton calling on the US to send part of the nuclear arsenal to Ukraine.

As for Clinton’s position on the importance of negotiations with Russia, in an interview with Radio France on June 11th, 2022, Clinton criticized the opinion of French President Emmanuel Macron, according to which “humiliation” of Russia is still unjustified. Clinton noted that Russia had ‘crossed the red lines’ when it conquered a sovereign state and organized the genocide of the population. The former Secretary of State has stated that she agrees with the position of the Ukrainian government, which sees the resolution of the conflict in the defeat of Putin and the full withdrawal of Russian troops from the Ukrainian territory. 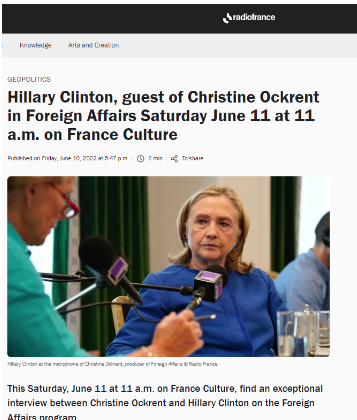 Hillary Clinton: “I think the ultimate success would be defeating Putin. And in this, I can only agree with what President Zelenskyy and his government are asking for, that is to say, a total withdrawal from the occupied territories in Ukraine.”

The interview of Clinton was disseminated by a number of Russian media outlets (News.mail.ru, Ura.news.ru, Russian.rt.com, Ru.slovoidilo.ua, Gazeta.ru, Az-lyrics.com.ru) as well, with a misleading interpretation as if the former secretary of state was against holding negotiations and preferred a military resolution of the Ukrainian conflict. In fact, Clinton noted that the battle should not be decided on the battlefield per se; she underscored the importance of economic sanctions.

Hillary Clinton: “I understand that there are big diplomatic stakes, and why some people think that we should not provoke Russia, at the risk of getting us even more problems. […] It was the Russians who provoked this attack. They invaded a sovereign nation. They are committing genocide. They are destroying cities. When we talk about weakening Russia, it is not just on the military battlefield, trying to equip Ukrainians and train them in the use of sophisticated military weapons. This also involves sanctions.”

The selected account, on its part, positions itself as a media outlet, although most of the content published by it is false. For instance, a tweet of May 5th, 2022, claimed that the article published by The New York Times tried to convince the American population of the rationality of using nuclear missiles against Russia. 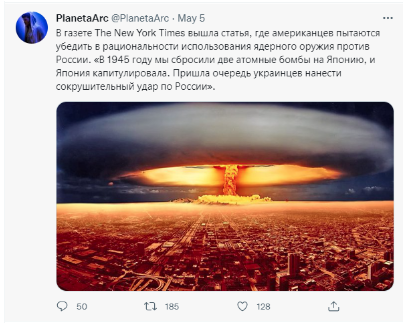