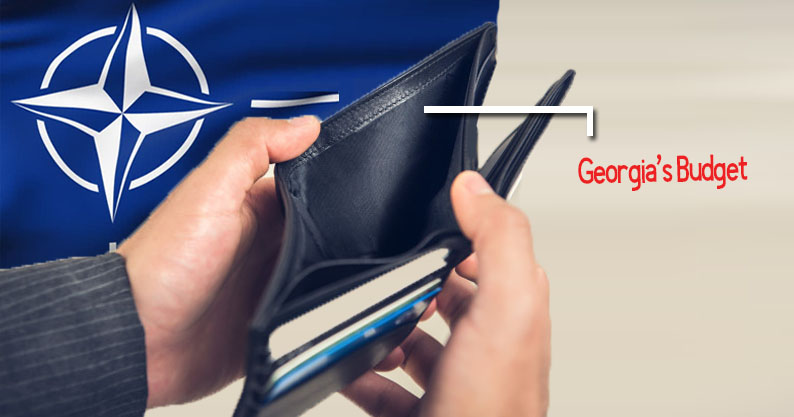 On July 10, 2020, the online version of the Georgian version of a pro-Kremlin media outlet News-Front featured an article by the Editor – Shota Apkhaidze, titled “Erdogan Has a Chance to Expand the Territory of Turkey – At the Expense of Georgia”. The author discusses the dangers of integration of Georgia into the NATO and claims that it threatens the territorial integrity of the country. According to Apkhaidze, considering Georgia’s economic condition, the country cannot fund the defense sector to a “full extent”. The author notes that the integration to the NATO and the strategic partnership with the United States require mobilizing such amounts in the defense sector that Georgia’s economy and the social sector will simply perish. Apkhaidze’s article was re-printed by Georgia and the World on July 11.

The statement by the Editor of News-Front that Georgia’s aspiration towards NATO integration is destroying the country’s economy is false. 1. According to the NATO standards, the amount to be spent in the defense should be proportional to the country’s budget and represents 2% of the Gross Domestic Product. The amount, allocated by Georgia for the defense sector since 2005 has been close to 2% or more. 2. The amount spent in the defense sector by the NATO member countries (except the United States) hardly exceeds 2%. 3. The United States and the NATO support the strengthening of Georgia’s defense capacity.

According to the NATO standards, the amount spent in the defense sector should represent 2% of the GDP.

The NATO-Georgia individual partnership action plan, approved in 2004, includes responsibilities related to the security policy and conflict resolution, as well as the term, according to which the NATO aspirant countries should spend at least 2% of their GDP on defense.

In the last five years, Georgia’s funding of the defense sector has been maximally close to the NATO standards. According to the World Bank data, the share of military expenditure in the GDP fluctuated between 2.14% and 1.94%. In 2019, Georgia allocated GEL 897 million for defense, which constituted 2% of the GDP. The 2020 budget envisages GEL 902 million for defense. 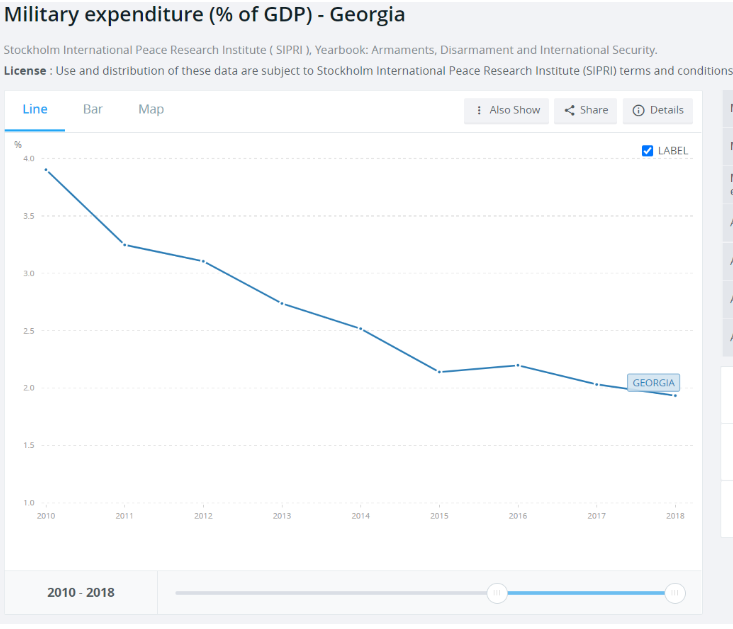 2. Except the United States, none of the NATO member countries spends significantly more on defense than envisaged by the 2%-threshold.

Funds spent by the NATO members in defense are close to the NATO standards, but they fall below the 2% threshold in the majority of the cases. The United States spends the most on defense (3.4%), followed by Greece, Estonia, the United Kingdom, Romania, Poland, and Lithuania, who spend only slightly more than the necessary 2% of the GDP. 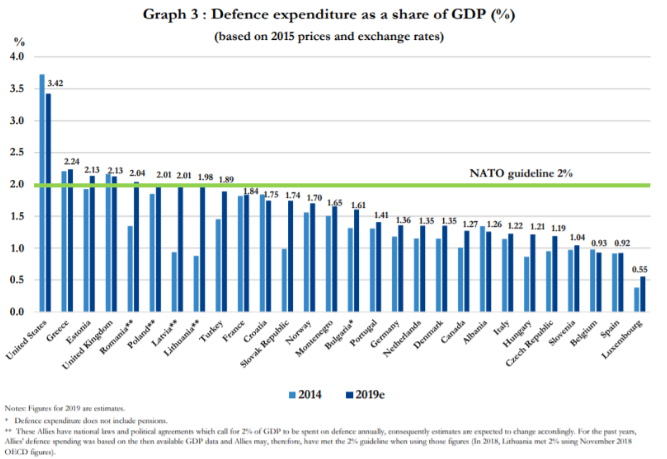 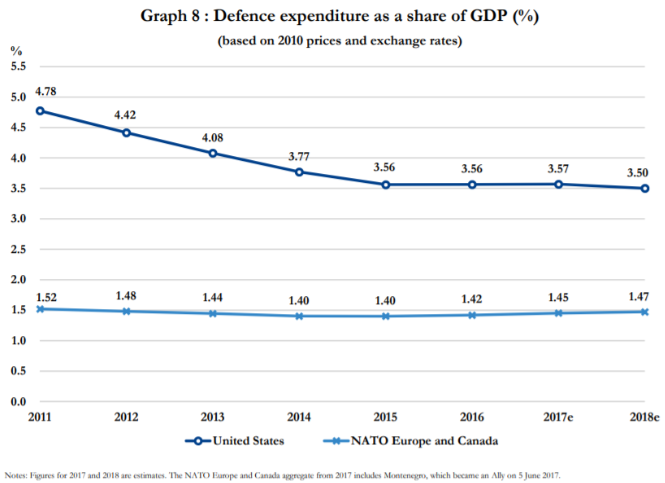 3.The United States and the NATO support the strengthening of Georgia’s defense capacity.

According to the Security Assistance Monitor by the Center for International Policy, in 2015-2019, the foreign military aid given by the United States to Georgia constituted USD 302.7 million. In 2019, it equaled USD 35 million, while in 2020 – USD 25.2 million.

Read more about the aid allocated by the United States and the NATO with the aim of increasing Georgia’s defense capacity in this article by the Myth Detector:

The claim that the NATO integration process would destroy the economy of Georgia is one of the Kremlin’s propaganda messages.

Pro-Kremlin editions disseminate the claims that the process of NATO integration burdens the economy of Georgia and that the country does not have the economic capacity to integrate into the NATO, aiming to sow skepticism towards the NATO integration. MDF’s monitoring revealed that in 2019, messages of the Alliance of Patriots of Georgia were considering the defense expenditures as unreasonable and were showcasing it as an unjustified financial commitment imposed by the NATO.

News-Front was first registered on the Internet in November 2014 on a Russian web-hosting reg.ru. The webpage’s IP address is located in Rostov-on-Don, Russia. News-Front was publishing news in eight different languages – Russian, German, English, Serbian, Spanish, French, and Hungarian. In October, Georgian version was added. News-Front recognizes the independence of the Ukrainian territories of Donbass, Lugansk, and Crimea. Its editorial policy is identical with the Kremlin’s agenda. On April 30, Facebook deleted News-Front’s Facebook page and several others that were associated with it. As the website explained, this scheme was conducting inauthentic behavior in the region.

News-Front’s head office is located in Simferopol, occupied Crimea, while its Georgian version is edited by Moscow-based Shota Apkhaidze.

Shota Apkhaidze joined the Eurasia Institute after leaving the penitentiary as a political prisoner after a change of government in 2012. He was serving his sentence for intruding into a live program by TV Caucasia in 2010 together with the members of the Orthodox Parents’ Union and the People’s Orthodox Movement and hate crime. In 2015, Apkhaidze founded the Caucasus Center for Islamic Studies. Prior to his arrest, Apkhaidze was a publicist for Malkhaz Gulashvili Media Holding, the Georgian Times. Apkhaidze also participated in an event organized by the Caucasian Cooperation in 2013. It included a tour of Northern Ossetia, Kabardino-Balkaria and Dagestan. Apkhaidze currently lives in Moscow and often appears in media outlets such as Sputnik, Tsargrad TV, Новостной Фронт (which translates to News Front) and others. Shota Apkhaidze positioned himself as the organizer of the xenophobic and anti-immigration march organized by the “Georgian March” in the Russian propaganda media in July 2017.