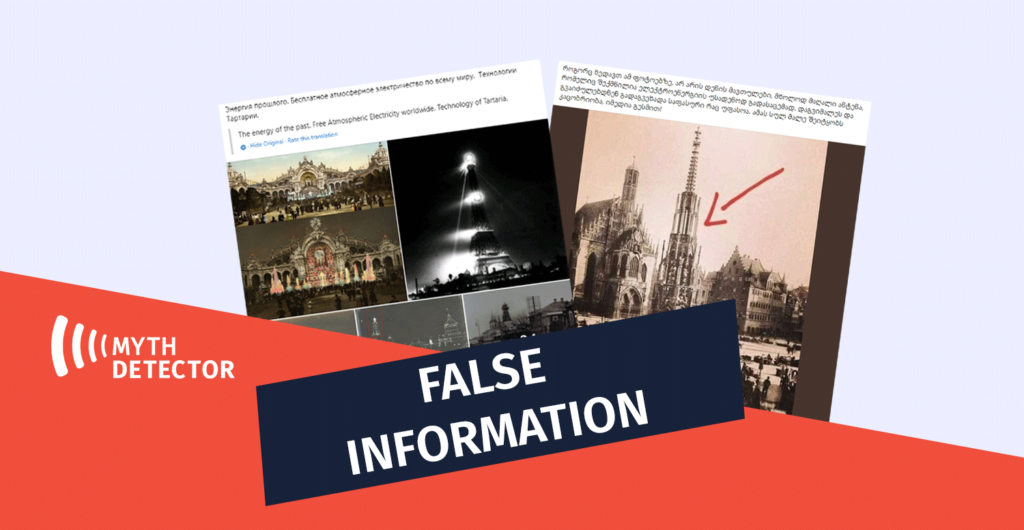 On 8 November 2022, a Georgian Facebook user posted a vintage image of a European town square. According to the author, there are no power wired in the image, and instead the photo shows an antenna designed to deliver electricity wirelessly. The author claims that people are being made to pay for what is actually free. 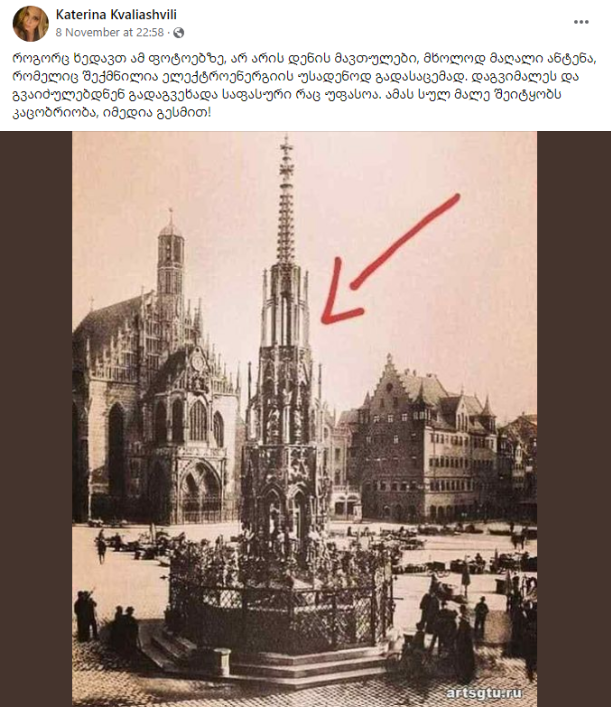 Throughout 2022, two videos claiming to show wireless trams were shared across Russian social media (1, 2, 3, 4, 5, 6). The authors claimed the videos showed that free electricity was everywhere. Similar claims about free atmospheric energy were also spread across Russian Facebook accounts in 2021 (1, 2). 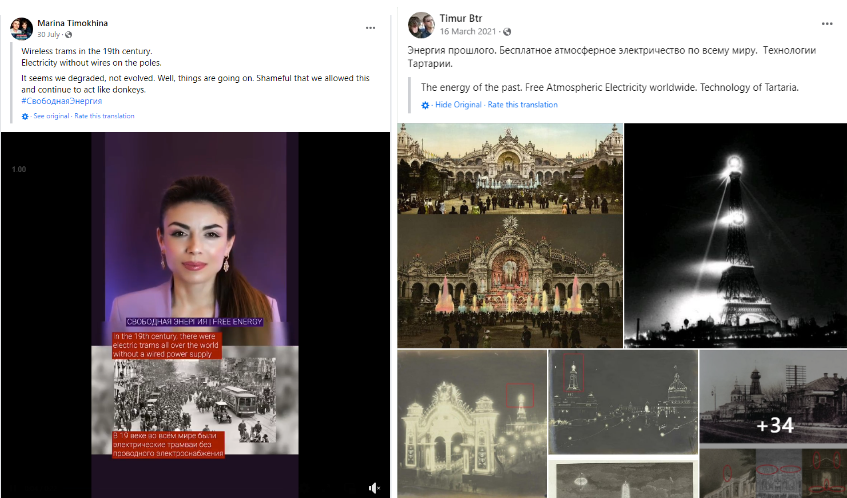 The mentioned posts disseminate misinformation. The images and videos shown in all of these posts date from 19th century and the early 1900s. In the case of the Georgian Facebook post, the image attached depicts a fountain in Germany. There is no relation between many of the pictures and electricity.

The picture posted by the Georgian Facebook user shows the Schöner Brunnen, a 14th-century German fountain found on Nuremberg’s main market square next to the town hall. The fountain has the shape of a Gothic spire, similar to that found on churches. 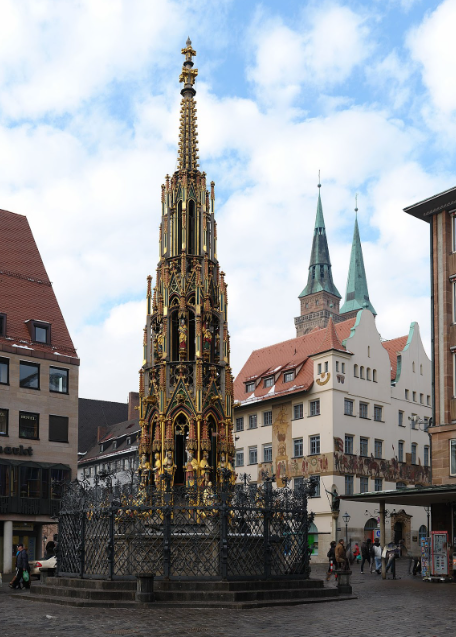 There is no relation between the fountain and electricity. The photo was taken at some point between 1900 and 1905, before electrical transmission lines and grids were commonplace. Furthermore, as can be seen in the picture above, electricity lines are still not necessarily visible throughout the main square due to the invention of underground utilities. Dense downtown areas are more likely to have underground transmission as opposed to overhead wires because of the lack of space available and for aesthetic reasons. For either method, overhead or underground, however, transmission lines are a necessary component to receive electricity. They carry high-voltage electricity over long distances, and connect electricity generators with electricity consumers.

In the case of 19th-century trams, electricity was sometimes delivered via the rails, rather than through power cables overhead, hence the lack of overhead wires as shown in the videos. Similar to the lack of wiring in dense cities, some tram companies chose to run without overhead wires for an aesthetic reason. Instead, they used subterranean power delivery, which involved burying electric cables directly beneath the trackbed via a hidden “third rail,” allowing for electricity to be transferred to the train but keep pedestrians safe. As with the transmission lines for household electricity, this still required electricity to be generated elsewhere and does not mean that the trams were running on “free” or “atmospheric” electricity. However, this option did not work for every locale and was often more expensive; hence why many companies chose to use overhead wiring as still seen today.

In the second video, which originally came from a YouTube clip of a longer video discussing free energy made by a group known for spreading conspiracy theories related to the climate, the narrator starts by discussing wireless trams as evidence of the existence of free energy before 1880. He then lists a number of scientists who envisioned a futuristic form of travel using devices similar to flying saucers, including Nikola Tesla, who designed an engine for a flying machine; Otis T. Carr, who patented a flying saucer and asserted he was working on a full-size version that could fly to the Moon; and Alexander Weygars, who envisioned a San Francisco where everyone travelled via circular aircraft similar to flying saucers and patented a design for his “Discopter” in 1944. While these designs were patented, most were not built and had serious design flaws. The video also discusses the concepts of scientists from the Middle Ages to the mid-19th century, including Renee Descartes and Isaac Newton, who studied aether, which was supposedly the fifth element that fills the region of the universe beyond the terrestrial sphere. It was thought that this element could provide free energy if there was a way to harness it. The video then focuses on the work of the Russian scientist Dmitri Mendeleev who attempted to classify aether as a chemical element and claimed that it was the chemical basis for all planets and galaxies. The video ends by claiming that the science and technologies related to aether and free energy were suddenly withdrawn from use at the beginning of the 20th century and that the aether theory was purposefully destroyed in science. In reality, a study by A.A. Michelson and Edward W. Morley in the late 19th century proved that such an element does not exist.