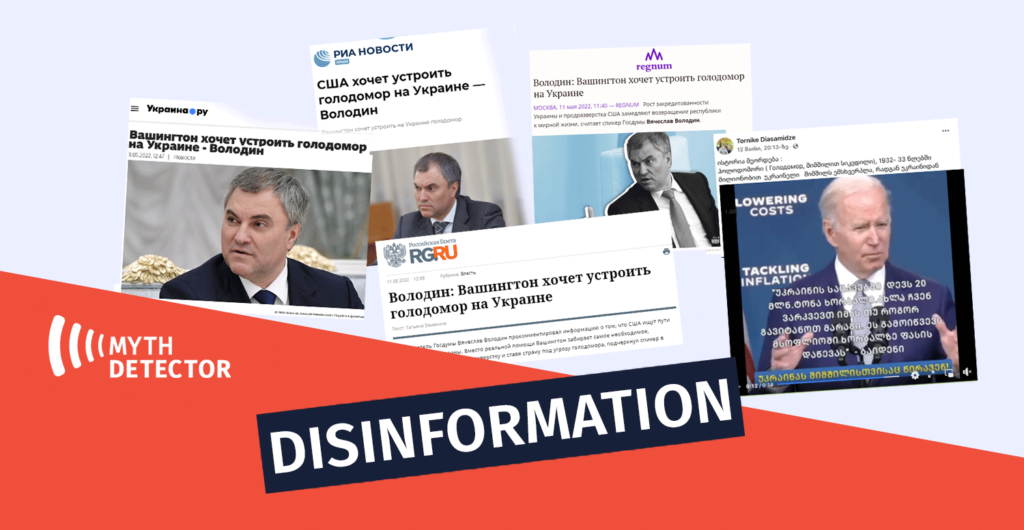 On May 11th, Russian-language media outlets (rg.ru, Ukriana.ru, regnum.ru, crimea.ria.ru) published an article stating that the U.S. wants to orchestrate Holodomor in Ukraine. The information is based on the comment of the Speaker of the Russian Parliament – Vyacheslav Volodin. Volodin responded to Joe Biden’s May 10th speech, in which the U.S. President noted that grain from Ukraine’s stocks should be taken to export in order to reduce grain prices globally. According to Volodin, the real reason behind the initiative on grain export is the desire of the U.S. wants to extract the USD 40 billion debt entailed under the Lend-Lease Act. The articles state that Ukraine needs the reserves of grain itself and the exports will create an imminent danger of starvation.

Identical information was disseminated by Georgian Facebook pages (Conservative Movement Batumi, Fantina Georgian) and individual accounts (Tornike Diasamidze, Malkhaz Khabazi, Read Joke). An excerpt from Joe Biden’s speech is also being shared on Facebook, in which he talks about the export of grain from Ukraine: “Ukraine has 20 million tons of grain in storages right now. We are now trying to figure out how to get it out of the country and to market, which should reduce the prices around the world.” 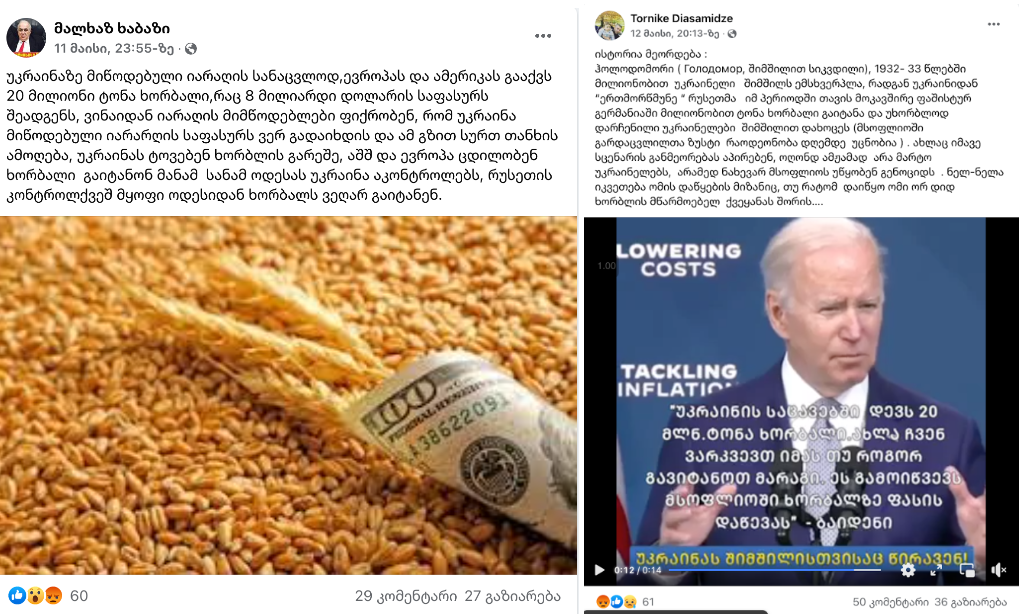 The claim that the U.S. is trying to make Ukraine fulfil the Lend-Lease obligations by making it export grain is disinformation. In fact, nowhere in the Lend-Lease Act is it stated that arms will be supplied to Ukraine in exchange for any condition or obligation. The excerpt from Joe Biden’s speech is disseminated manipulatively. In fact, the U.S. President noted that if the grain in Ukrainian warehouses could not be exported, many countries that receive grain from Ukraine would face starvation.

The video disseminated on social media is from Joe Biden’s May 10th speech, in which he mainly talks about inflation problems and the need to export grain from Ukraine. Biden notes that Putin’s war has led to rising food prices, as Ukraine and Russia, two of the world’s major grain suppliers are completely paralyzed. Biden notes that inflation is caused by two reasons – the pandemic and the war in Ukraine. Both factors are of a global scale.

In addition, in his May 11th speech on food prices, Joe Biden spoke in more detail about the importance of exporting grain from Ukraine. He noted that if the grain is not exported from Ukraine, certain African countries that are dependent on Ukraine will actually face the threat of famine.

Joe Biden: “For example, Ukraine says they have 20 million tons of grain in their silos right now — 20 million tons. And guess what? If those tons don’t get to market, an awful lot of people in Africa are going to starve to death because they are the sole — sole supplier of a number of African countries. Somalia — I won’t go through them all.”

Notably, according to the Ministry of Agrarian Policy and Food of Ukraine, the Russians themselves steal the grain from Ukraine and then export it. Ukraine’s Deputy Agriculture Minister Taras Vysotsky said on the Ukrainian television that the Russians had exported at least 441,000 tonnes of grain from four occupied regions: Zaporozhe, Kherson, Donetsk and Luhansk.

The chairman of the Russian Duma blames the United States for orchestrating the Holodomor. Mykhailo Podolyak, the advisor to the Head of the Office of the President of Ukraine, also responded to this topic, noting that Ukraine sells only the part of the grain that it has in surplus.

On May 16, The High Representative of the Union for Foreign Affairs and Security Policy, Josep Borrell also denoted the need to export grain from Ukraine. According to Borrell, the European Union will create a number of “green corridors” for the export of Ukrainian grain throughout Europe.

Josep Borrell: “The storage capacity of Ukraine is full, because they cannot export this grain and they need to empty this storage capacity in order to be able to receive the next crop. So, we are working on how to help them to take this grain out by train, via these Solidarity Lanes.”

The war in Ukraine threatens the most important supply of grain for the least developed countries of the world. According to the Comtrade (UN) database, countries in Africa and the Middle East are heavily dependent on wheat imports from Russia and Ukraine. Benin and Somalia received the entirety of their wheat imports from Ukraine and/or Russia. According to the data, Egypt’s dependence was 82 per cent.

On May 9th, U.S. President Joe Biden approved the Lend-Lease Act, which states that to counteract the ongoing or impending invasion of Russia, the United States can supply arms to Ukraine or Eastern European countries for fiscal years 2022-2023 without restrictions or bureaucracy.

Under the Lend-Lease Act, stockpiles of weapons were not sold or given as a gift, but are shipped on the basis that they will eventually be returned to the United States. Notably, in this case, the U.S. government did not make any specific terms and guarantees for the return of money or weapons.

The Lend-Lease Act during WWII

The Lend-Lease Act was first approved by the United States in 1941, and signed by President Franklin Roosevelt. The Act allowed President Roosevelt to provide assistance to countries involved in the fight against Nazi Germany without complicated bureaucratic barriers. The U.S. military-technical assistance to the Allies Forces totalled USD 50.1 billion. The assistance provided to the Soviet Union amounted to USD 11.36 billion.

81 years after the historical event, in order to counter the Russian aggression, U.S. President Joe Biden signed the Act once again. The Lend-Lease Act notes that the bill is not subject to certain requirements and provisions that typically apply to such lend-lease agreements.

Notably, after World War II, the Soviet Union had to pay for only a small part of the military equipment received under the Lend-Lease program. Combat equipment and equipment destroyed during the hostilities were not subject to payment at all. The Soviet Union began repaying its debt only in 1972, 27 years after the end of the War. Payments were discontinued the same year and only continued in 1990 and were fully completed by 2006.

In order to examine the details of the Lend-Lease Act, “Myth Detector” talked to Tornike Turmanidze, a professor at Tbilisi State University. Turmanidze noted that the export of grain from Ukraine has nothing to do with Lend-Lease obligations. In fact, Russia itself is stealing wheat from Ukraine and trying to cover for it. He stressed that this was a common tactic for Russia.

Tornike Turmanidze: “In fact, they do it to cover up their crimes. The fact is that the Russians themselves have stolen Ukrainian wheat and are now trying to sell it in Syria and other countries in the Middle East. They have blocked the actual sea area through which Ukraine could export its grain. The port of Mariupol is not functioning, the port of Odesa is blocked, the grain has been stolen from the occupied territories, and Russians are now trying to sell it.”

Tornike Turmanidze drew a parallel between the Lend-Lease Act signed by Joe Biden and the Lend-Lease Act signed by Roosevelt during World War II, noting that, similar to WWII, the cost of military equipment and equipment destroyed during the hostilities will not be paid by Ukraine. Whether Ukraine will have to repay any obligations will be determined by agreement between the two sides after the end of the war.

Tornike Turmanidze: “Neither the terms nor the specific conditions are written in the act. “When the war is over, the two sides will sit down and agree on some details, which, given the World War II practice, can be a very small part and some symbolic payoff.”

Turmanidze noted that Russia uses the propaganda methods typical of the Soviet regime and tries to convince the public that the US is doing everything for personal gain.

Tornike Turmanidze: “Russian propaganda, much like the Soviet propaganda at that time, liked portraying the United States as, so to speak, evil capitalists who want to profit from everything. This is absolutely false, and so they invent these non-existent details, as if the United States is helping Ukraine not to help repel the invasion of Russia but because they have some material interests. This is a common method. Soviet propaganda did this, and so does the Russian one. “