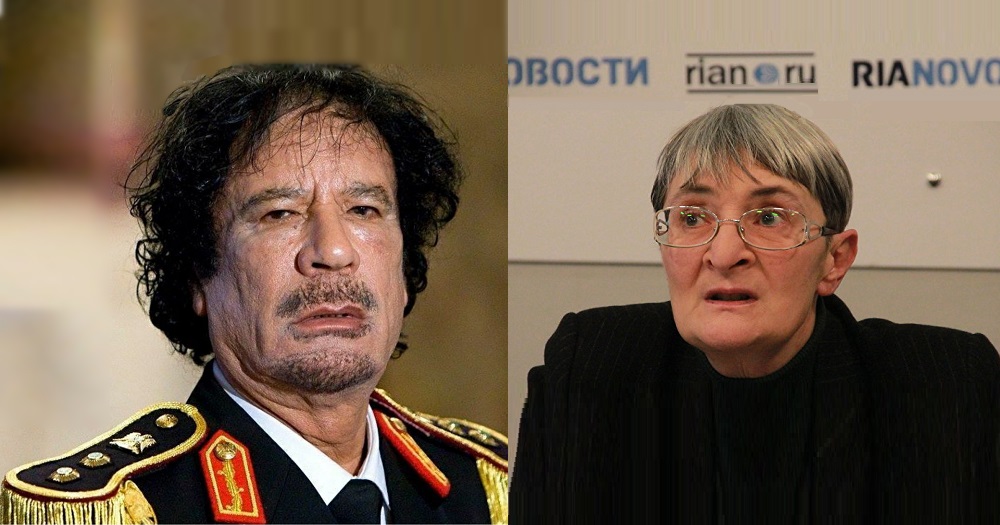 On July 4, 2017, on air of TV Obiektivi, the Head of the Global Research Centre, Nana Devdariani stated that Muammar Gaddafi’s social-equality-based state was destroyed by the West.

Nana Devdariani, Global Research Centre: “The same was happening concerning Muammar Gaddafi – they totally destroyed and razed the social-equality-based state to the ground. Factually, we can say that it does not exist anymore, can’t we?”

The governance of Muammar Gaddafi (1969 – 2011) has been assessed as dictatorship and instead of social state, the state power was distributed to a narrow group and the critical opinion towards his policies was strictly punishable. Gaddafi was behind several terrorist acts, with the passenger plane bombing over Lockerbie being the most famous one – 270 died in this attack.

Fact 1. Soon after coming to Power, Gaddafi started to distribute the state power.

Soon after coming to the power, Gaddafi started to appoint his family members and close friends to the leading political positions which was followed by a rise of corruption in the state agencies. The situation was further aggravated by the fact that the place of the foreign companies in the oil business was occupied by the Gaddafi surroundings. Therefore, instead of the regime that Gaddafi was promising to establish to his population, he created an ultra-hierarchical pyramid in Libya, headed by Gaddafi, his family members and close circle with an unrestricted power and backed by the severe methods of the security apparatus.

In 1969, after several failed coup attempts, Gaddafi, possessed with the fear of losing the power, made political dissidence and critical expressions towards the acting regime punishable. In the end, Gaddafi’s theory on state rule led to a complete intolerance to the different and alternative opinion and left the population of Libya without constitutionality, civil society and authentic political engagement capacity.

According to Reuters, there was a local repressive organization in one of the provinces, Khoms, which, in the process of exercising its power, used such methods as: use of electric shock against the suspects, detention of the arrested in inhumane conditions, whipping with electrical cables etc. The dead ones were buried secretly. This all was done for the sole purpose of causing fear and unopposed obedience among those who wanted a revolution.

Gaddafi’s justice system included a collective punishment, meaning the punishment of the criminal’s family members and close relatives together with the criminal. Individuals, who, in Gaddafi’s opinion, disseminated information harming the reputation of the state, were also punished by death penalty.

In 1970, Gaddafi deported an Italian community left in Libya. In addition, he considered the case of Zionism and Israel as a fight between Arab nationalism and imperialism, due to which he deported a Jew community as well in the same year.

Fact 4. “Fictional” engagement of the public in the decision-making process

The Libyan population was attending the meetings of the congress, which did not possess any real power, authority or budget. Those presented there knew that anyone who attempted to criticize the existing regime would be jailed.

Fact 5. Gaddafi and his trusted individuals were behind several terrorist acts and terrorist groups

Gaddafi actively used a part of the funds received from the expulsion of the European companies and establishing a full control over the oil for escalating conflicts both on regional and wider scale. He engaged the Libyan Armed Forces in the bloody civil wars of Egypt, Sudan and Chad. According to the data of the Federal Bureau of Investigation, as well as the Central Intelligence Agency of the United States mention, the following terrorist acts and terrorist groups are associated with Gaddafi’s name:

Arab Spring and the End of Gaddafi’s Dictatorship

Despite the severe political environment and repressions, the protest wave of Arab Spring still broke in Libya and encompassed the entire country starting from Benghazi. Gaddafi tried to suppress the wave of rebels and, apart from the local police, he used specifically hired foreigners for this purpose, who were allowed to fire at the demonstrators. In addition, Gaddafi actively used helicopters to bomb the protesters. Gaddafi called his supporters via media to fight against the members of the protest manifestations, who, according to him, were traitors of the country, foreigners and drug addicts. In parallel with the loss of lives, the will to see the Gaddafi dictatorship end was rising among the population of Libya. Already by the end of February 2011, the reels were controlling most of the country and formed an administrative body –National Transitional Council. NATO, as well as 30 other countries expressed support towards this council and recognized it as a legitimate Libyan Government. The fall of Tripoli and the seizure of control over it by the Council at the end of August 2011 was already counted as the main victory of the rebels. Western countries were actively supporting the National Transitional Council, as the expressers of the will of the Libyan people to live in a country free from the dictatorial regime. In June 2011, the International Criminal Court found Gaddafi, his son and the son-in-law guilty of crimes against humanity.