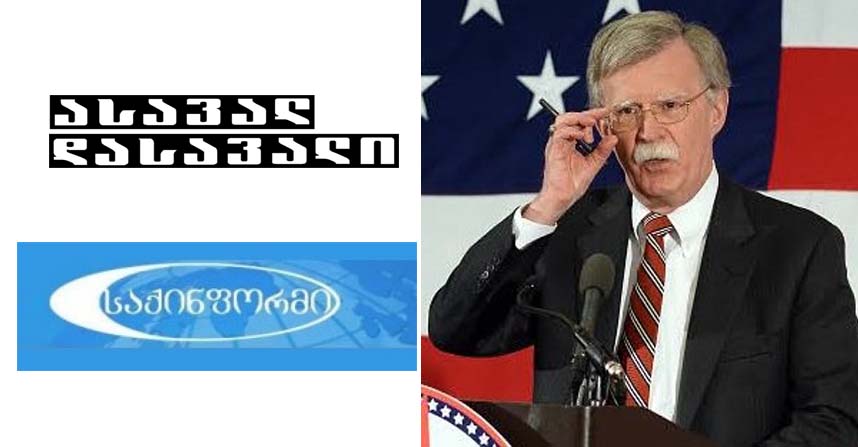 October 29 – November 4 edition of Asaval-Dasavali newspaper featured an interview of Hamlet Chipashvili, a political scientist, who claimed that the sanctions imposed on Russia due to its participation in the Ukrainian conflict do not concern Georgia. The identical message was voiced on October 29 in an online-edition Saqinform, too. The  interview with the Editor of Saqinform, Arno Khidirbegashvili, apart from touching upon the issue of sanctions, incites skepticism towards the official position of the United States.

Interpretations of John Bolton’s visit in Asaval-Dasavali and Saqinform are disinformative. Bolton, the National Security Advisor to the President Donald Trump, stated during his visit in Tbilisi that sanctions have been imposed on Russia for occupying Georgia’s integral Abkhazia and Tskhinvali region, while also reiterating the United States’ support towards Georgia’s aspiration to become a NATO member.

Sanctions. During a conference in Tbilisi on October 26, Bolton stated, that “the United States has already introduced various sanctions against Russia. Part of the sanctions were imposed following the 2008 Russo-Georgian War, when the Georgian territories – South Ossetia and Abkhazia were occupied.”

It is noteworthy that the package, of sanctions, introduced against Russia in 2017, labels the occupation of Abkhazia and the so-called South Ossetia by Russia as a violation of international law. The legal bill on sanctions mentions that Georgia, together with other countries, will receive aid from the United States in order to counter the Russian aggression and the damage caused by the latter.

NATO integration. John Bolton reiterated the United States’ support to the aspiration of Georgia to integrate in NATO and noted that the policy of the United States towards Georgia’s integration in NATO is unchanged. He also added that there are multiple directions, in which the American-Georgian cooperation can be deepened.

Disinformation connected to John Bolton’s visit in Georgia has been spreading actively. Apart from Asaval-Dasavali and Saqinform, on October 31, a suspicious web-portal, ReportBlogs disseminated  disinformation, that the National Security Advisor of the United States, during his visit in Georgia, expressed his concern over the military defense equipment purchased by Georgia and threatened the country with discontinuing partnership. The web portal was only registered nine days prior to the publication of the article.