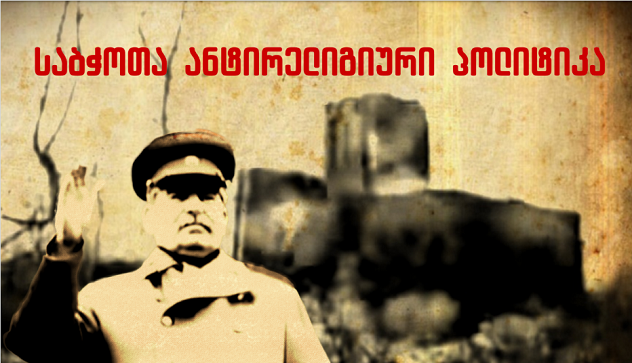 There was active discussion on social media in Georgia surrounding a recent article published by Sputnik Georgia. The piece covered and reported about a movie directed by a priest in the Dighomi district of Tbilisi, Father Ioane Chigogidze. The movie is titled “Who Won the War”. According to the film, Stalin built around 20,000 churches after the end of the Second World War. The film also states that Stalin opened religious educational institutions (seminaries and academies).

The information disseminated in the film “Who Won the War” is false!

Below, Myth Detector presents facts about the Soviet Union’s anti-religion campaign, including information about purges against the clergy, and data on the number of churches that were closed or destroyed under Stalin.

Soviet policy directed against religious institutions and the clergy aimed at declaring the Church as unlawful. The government prohibited church service and led a campaign against the clergy, who refused to subscribe to the new rules. At village town-hall meetings, decisions were taken to demolish religious buildings or re-utilize church spaces. At the same time, the Communists carried out a public prosecution of religion that was intended to demonize the church among the villagers. On January 5, 1927, the “Union of Godless Fighters” was founded in order to destroy religion. The group organized lectures, events, plays and meetings, all aimed to diminish the role of religion. A special unit of the group carried out special operations in public spaces and public transport, disseminating literature and talking to the public, feeding them atheist propaganda.

1. Churches that were closed down/destroyed under the Soviet Union in 1921-1953

Over the course of one year in 1923, with the initiative of Joseph Stalin, around 1,212 churches and monasteries were demolished in Georgia. Between 1921-1953, around 1,305 religious buildings were shut down or utilized for other purposes. Throughout this period, around 3,407 members of clergy were purged (the figure represents the difference in numbers of clergy between 1921-1953, and might not represent the exact number of purged members of the church). The information given in this table is based on the archives of the Ministry of Interior of Georgia and the 2012 edition of “A History of Georgian Church.”

Utilizing 15 tons of church-bells as scrap in following order:

Stalin’s anti-religion policy resulted into death of thousands of Georgian clergy. Members of clergy were deported or executed by the government. One of the victims of Communist repressive policy was Archimandrite Pimen Dashniani for Tsageri and Kvemo Svaneti region. Archimandrite Dashniani was executed for baptizing children. Below you can find an exempt from his file: 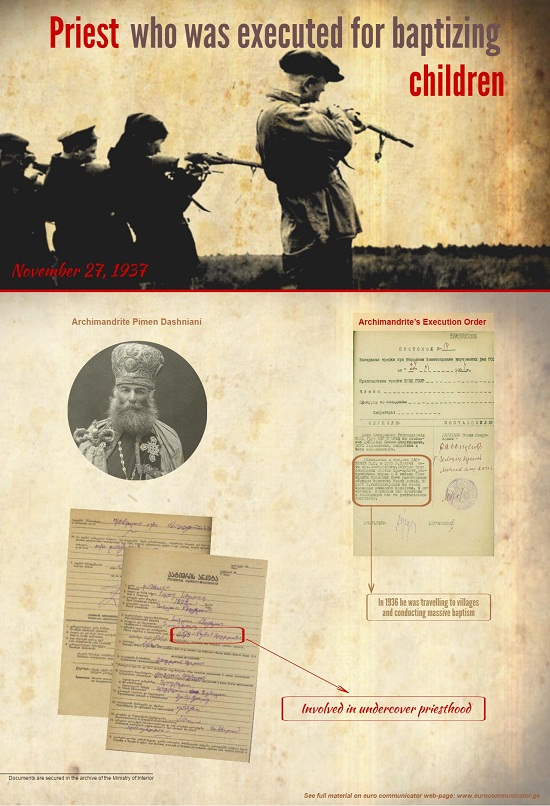 Serving in White Army or over counter-revolutionary force, participating in a gang, and demonstrations against Soviet Government – noticed in “proboltyorstvo” (“chatter” in Russian).

In accusal, the prosecution argued that Archimandrite Dashniani was violating public order by baptizing 120 children in one month. Dashniani was found guilty and executed in 1937 for “massive baptism”.

According to the Ministry of Interior files, around 832 people were executed for taking part in 1924 uprising, out of which 44 were members of clergy.

Stalin’s repressive anti-religion campaign was alleviated following the year of 1941. Number of churches were reopened. However, political redirection has its reasons. According to the publication – “13 Myths about Stalin”, Nazi Germany in some cases reopened churches on the captured territory between 1941-1942. Germans reopened around 9400 churches in Ukraine and Belarus. Reopening of the religious spaces by the Nazi Germany played a decisive role for Stalin to ease the anti-religion campaign. Council for Church Affairs was established and was chaired by General Karpov of Security Committee. Karpov coronated and assigned clergy to the eparchies. The policy aimed at controlling and commanding the Church.

Despite the change into policy, after the WWII, Georgia has not seen massive campaign that restored religious institutions or churches. In March of 1945, about 29 churches were opened in Georgia that registered 5 bishops, 41 priests, 2 clerics and 3 psalm-readers.

Therefore, the statement that Stalin built around 22,000 churches after 1945 – is false.