Disinformation Spread in the Name of the EU Ambassador 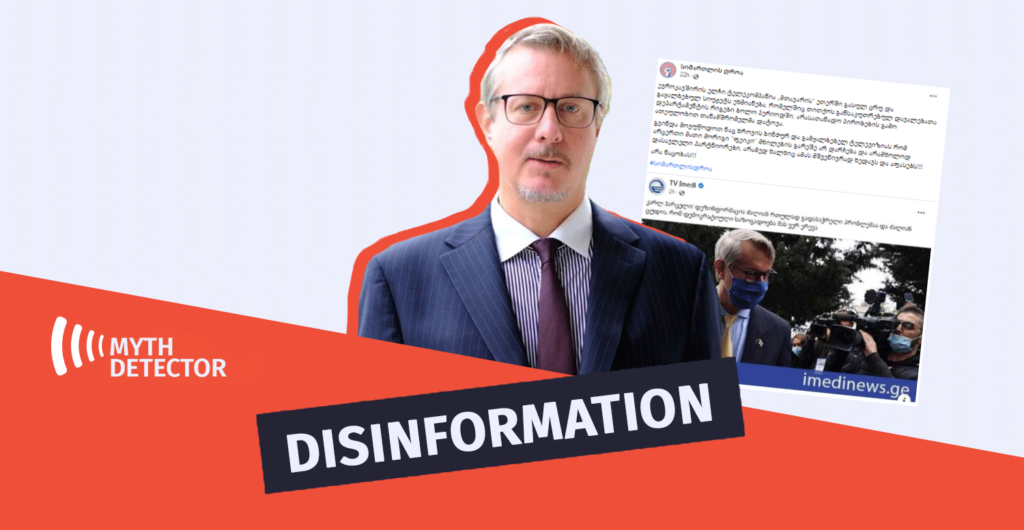 On November 15th, 2021, “Simartlis Droa” [Time for Truth], a Facebook page that has been suspected of discrediting the opposition on a regular basis, published a post claiming that the EU Ambassador Carl Hartzell had responded to a disinformation story aired on “Mtavari Arkhi.” According to the post, the false stories spread by the “Mtavari Arkhi” and the “United National Movement” are now even being exposed by the Western partners. The post is accompanied by a screenshot of “Imedi TV” with the inscription: “Disinformation is a very difficult problem to solve, and it is very unfortunate that the democratic society cannot deal with it.” 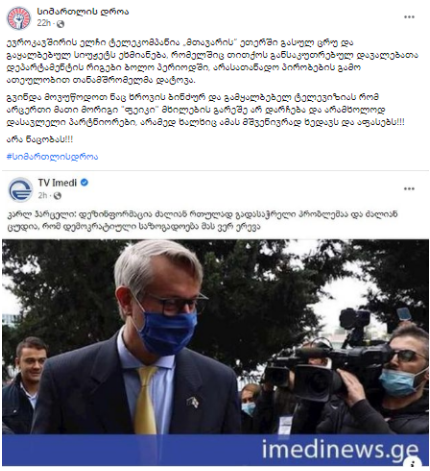 The claim that the EU Ambassador exposed the disinformation spread by “Mtavari Arkhi” is false. In fact, Karl Hartzell’s comment was not about the story of Mtavari Arkhi but was said as part of a media literacy event organized by the Georgian National Communications Commission.

Carl Hartzell’s statement about disinformation can be found in the news article published on the website of Imedi TV on November 15th, 2021. The statement refers to the project “The Challenge of Disinformation: Developing Critical Thinking in Schools” organized by the Communications Commission. According to Imedi TV, members of the Communications Commission and Carl Hartzell met with schoolteachers in Pankisi to discuss the importance of media literacy. The following words of the Ambassador are quoted in the story of Imedi:

“I am very happy to return to Pankisi and meet the teachers I first met in 2019. I am here because of an EU-funded project that deals with disinformation. As we know, this is a very difficult problem to solve, and it is very unfortunate that the democratic society cannot deal with it. We share with people the best European experience on how to raise media literacy in society, develop critical thinking and properly analyze what is read, heard or seen on television.”

According to the official page of the GNCC, the project “The Challenge of Disinformation: Developing Critical Thinking in Schools” was launched with the support of the EU three months ago. Hence, the statement made by the Ambassador referred to the general challenges of disinformation and not the individual story of “Mtavari Arkhi.”

The Facebook page “Simartlis Droa” was created on December 18th, 2012 and is managed by three people. The page predominantly published posts supportive of the incumbent Georgian Dream party and discrediting the opposition. 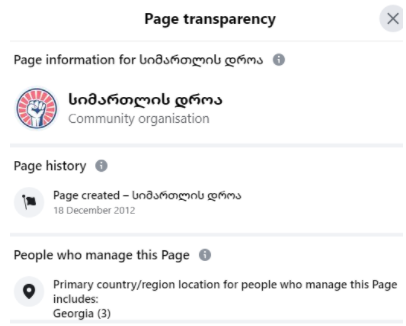 On October 30th, 2021, the day of the second round of the local self-government elections, the page disseminated disinformation about the research organization “ANOVA” contracted by Mtavari Arkhi to conduct exit polls. Read more in the article: Facebook Page Discrediting a Research Organization Contracted with ‘Mtavari Arkhi’

In addition, pro-governmental fake accounts identified by the Myth Detector were actively sharing the disinformation by “Simartlis Droa” about opposition figures, including Mikheil Saakashvili. Read more in “Myth Detector” articles: