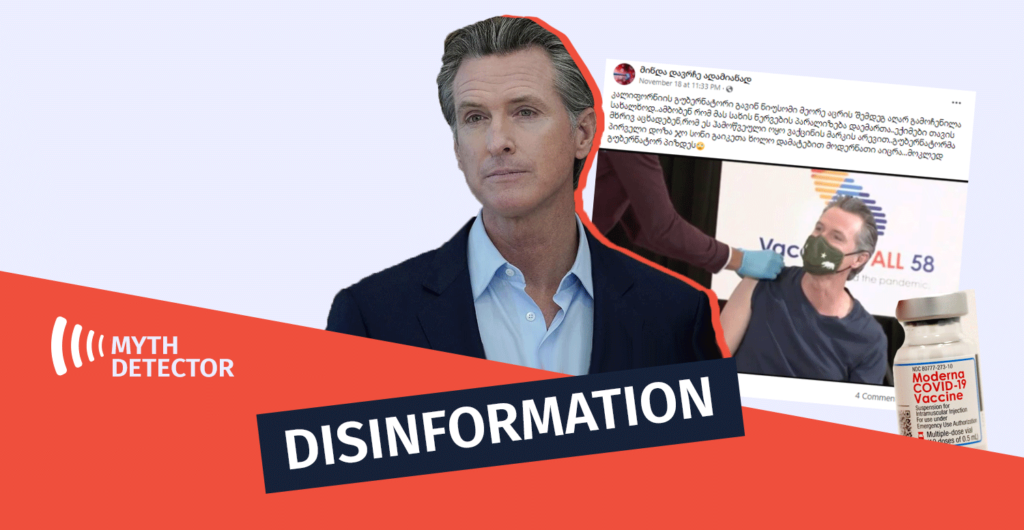 On November 18th, the Facebook user “Minda Davrche Adamianad” [I want to remain human] published a post depicting Gavin Newsom, the Governor of California, getting vaccinated against Covid-19. The post alleges that Newsom has not appeared in public since receiving the vaccine, as his facial nerves became paralyzed after receiving the jab. The post asserts that the doctors named mixing different types of vaccines as the potential cause, since the Governor first received Johnson&Johnson vaccine and was later inoculated with Moderna.

Information that the Governor of California suffered facial nerve paralysis is False. Gavin Newsom received a booster dose of the Moderna vaccine on October 27th and later cancelled his trip to the COP26 conference due to personal reasons. There is no evidence to support the claim that the Governor suffered from Guillain Barre syndrome, as after the vaccination, he appeared in a number of public events.

Gavin Newsom, The Governor of California, received the Johnson & Johnson vaccine shot on April 1st, 2021 and a few months later, on October 27th,  received a booster dose of the Moderna vaccine. A few days after receiving the booster dose, the Governor cancelled the trip to the COP26 conference in Glasgow for “family obligations”. This coincidence inspired rumors that the Governor was unable to attend the conference because he suffered from the Guillain Barre syndrome caused by the booster dose. By using CrowdTangle analytics, the fact-checking website factcheck.org identified that the social media posts spreading the claims drew more than 25,000 interactions on Facebook. The information that the Governor suffered from the symptoms associated with Guillain Barre syndrome, specifically the paralysis of facial nerves, appeared on Georgian social media as well.

The Governor’s office denied the claims about the Governor encountering severe reaction to the vaccination, stating that he was working at the Capitol on resolving the most urgent issues for California. Vogue claims that he attended the wedding of Ivy Love Getty, the great-granddaughter of J. Paul Getty, in San Francisco during his absence from the public.

During his brief time out of the public eye, Newsom appeared in a video posted November 4th on Twitter in which he sent his best wishes to those celebrating the holidays of Diwali and Bandi Chhor Divas. Also, he posted an image of him and his family on his Instagram on Halloween evening (November 1st).

Notably, Newsom underscored that he needed some time with his family and that his children would be very upset if he went to the COP26 conference. On November 9th, Newsom spoke at the California Economic Summit — his first public event appearance following COP26 — where he acknowledged his absence from COP26, noting that he spent time with his family and fulfilled various official duties.

Most recently, Newsom appeared in the charity event for River City Food Bank with his wife. There is no evidence to suggest that he suffered any lasting consequences of receiving the booster dose of the Covid-19 vaccine.

the Covid-19 vaccine. The Governor is especially vocal about the importance of vaccination. “It’s simple, all adults who are vaccinated need to go out and get their booster, period.”