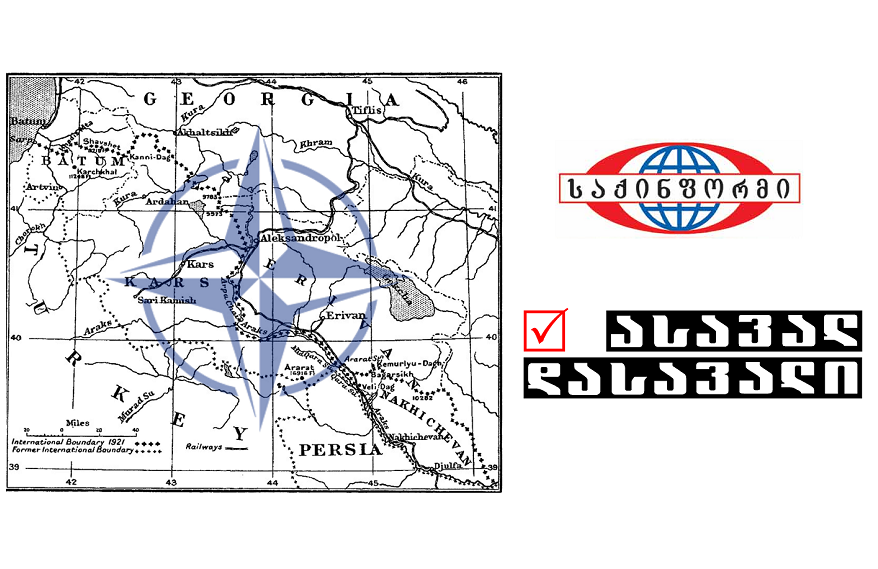 20-26 March issue of Asaval-Dasavali published an article by the editor-in-chief of the online-edition Saqinform – Arno Khidirbegashvili, titled “Saakashvili will rob Georgia of Adjara, if  NATO base is opened in Poti!”. Saqinform itself published the identical material with small modifications on March 15. The author of the article claims that the Ministry of Defense of Georgia allegedly submitted a request to Brussels for opening a NATO military base in Poti port. In addition, the article links the alleged opening of the NATO base to the Treaty of Kars, which often appears in particular pro-Kremlin and ethno-nationalist editions in the context of Turkish threat and Russia, as the protector from such threat.

Arno Khidirbegishvili, Saqinform: “As for Adjara, if NATO approves the request of the Government of Georgia submitted by the Ministry of Defense to Brussels and opens its military base in Poti, Russia will not interfere in the developments, however, it will not extend the Treaty of Kars in 2021 that makes it responsible for Georgia in relations with Turkey. Consequences? – Batumi port that will be transferred to Turkey in accordance with the treaty, will see a Turkish base opened there.”
Asaval-Dasavali, March 20-26; Saqinform, March 15

The widespread claim is disinformation, as the Ministry of Defense of Georgia has not addressed Brussels with the request to open NATO base in Poti; whereas NATO does not place its bases on the territories of non-members. As for the 1921 Treaty of Kars, it does not require an extension and, therefore, appealing to historic threats is groundless.

Disinformation #1: Ministry of Defense submitted a request to Brussels for opening a NATO military base in Poti port.

Real fact: there is no plan to construct NATO military base in Poti. According to the Ministry of Defense, this issue has not been raised in the framework of Georgia-NATO military cooperation format at all, hence, no discussions have been held.

The North Atlantic Alliance does not maintain military bases on the territories of the non-member states, because it represents a defensive military-political union only for the member countries.

Disinformation #2: Russia will not extend the 1921 Treaty of Kars in 2021, so the Batumi port will be seized by Turkey and a Turkish military base will be placed there.

Real fact: The Treaty of Kars is permanent, it is not bound by specific terms.

The treaty does not mention that it expires after some specific amount of time or that it requires extension. The Treaty of Kars was signed on October 13, 1921 between Turkey, on one side, and Armenian, Azerbaijan and Georgia SSR, on the other, in Kars. According to the treaty, Turkey transferred a part of Adjara, including Batumi, as well as Gyumri, to the Soviet Union, receiving Kars, Artvin and Ardahan in exchange.

Portraying Turkey as a threat in the context of Georgia’s Euro-Atlantic integration process and referring to Russia as the sole opponent of such threat (also, an Orthodox “brother”), is one of the characteristics of the anti-Western propaganda. According to MDF’s media monitoring results, three messages dominate this rhetoric: